In 2010, the American company DELL introduced a smartphone called STREAK. Screen resolution of about 800 X 480 pixels and the 5 inches screen were the most interesting features of the smartphone. It was the first time when people saw such a big screen smartphone. According to the Tech review sites, no one purchased the smartphone because of its huge size. STREAK vanished from the market, where, day by day new models of smartphones were released.

In October 2011, Samsung released a new smartphone called Galaxy Note, with 5.3 inch screen and 1280 X 800 pixel screen resolution. No one had ever thought that Samsung Note will capture the attention of people, but it happened. People liked it. Within 2 months a total of 10 Lakh phones were sold. Within 2012 it crossed 1 crore. 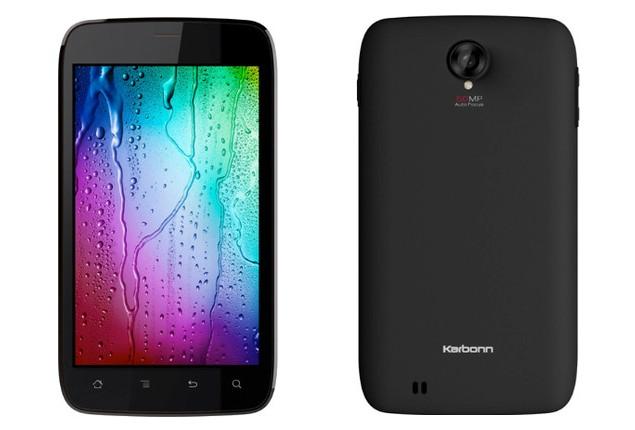 As Galaxy Note captured the attention of all people, all the other electronic companies started competing to release big screen smartphones. With all the features of smartphones and Tablets in it, this smartphone was called as Phablet. In the market there are number of phablets of different companies are available. A total of 256 Lakh phablets were sold in the market last year.

Indian companies are also doing great in the production of phablets. Indian companies like Karbonn, Lava, Micromax, i-ball have already released their big screen smartphones. Karbonn Smart A111 is the new smartphone in this area. It is not yet released in the market but has started online sale via internet in the company's official website. It costs Rs 11,300/-.
The interesting part in Karbonn Smart A111 is its 5 inches display with multi touch display screen. The resolution is not yet revealed by the company. It works on Android 4.0 Ice cream sandwitch version with 1.2 Gigaheartz dual-core qualcomm scorpion processor. 4 GB ROM, 2 GB internal memory, 512 MB RAM are other Hardware specifications. It is a dual sim model smartphone with 3G, WiFi and hotspot connectivity. 5 Mega Pixel camera with LED Flash, VGA front camera for video calling, light sensor, G-Sensor and Proximit Sensor are included in the Smartphone. Karbonn Smart A111 uses 2100 MAH Batteries.

The most unsatisfied part of the smartphone is its 512 MB RAM. Smartphones which work on Android 4.0 Ice cream sandwitch version should have more memory in its RAM.