High end smartphone is always a difficult buy when compared to the budget smartphones until we find a platform where we get to witness the analysis of every single feature in depth. With the intention of making your choices easier, Techulator has come up with an idea of comparing the two best in market smartphones; HTC J Butterfly Vs Nokia Lumia 920. Take a quick look to find out the verdict of this analysis. 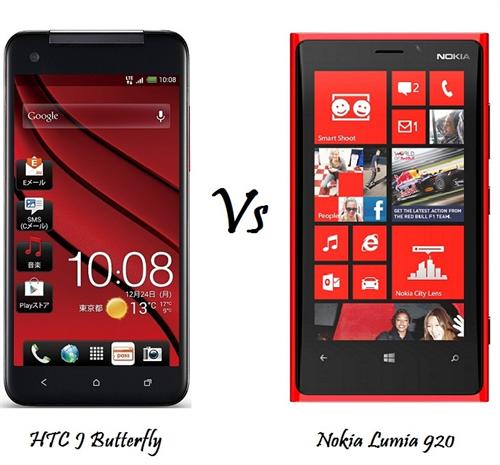 Processor and RAM: Both the smartphones are powered by magnificent processors clocked at 1.5 GHz each. The HTC J Butterfly carries an additionally impressive fact that it is powered by a Quad core whereas the Nokia Lumia 920 is powered by a Dual core which is also equally good. The HTC J Butterfly is provisioned with a 2 GB RAM which ensures the smoothest running of the applications whereas Nokia Lumia 920 is provisioned only with a 1 GB RAM, an equally good one.

Battery: The battery capacity of HTC J Butterfly is of 2020 mAh and Nokia Lumia 920 possesses 2000 mAh battery which is equally close.

If it is Android OS, the consumer gets the privilege to access millions of applications from the Google Play Store. And when it comes to Windows 8 Operating System, the consumers can customize the home tiles and receive updates on their fingertips.

Verdict: HTC J Butterfly or Nokia Lumia 920, which is better?

Looking at the advantages it is clearly seen that HTC J Butterfly is a better buy than Nokia Lumia 920.

As per out analysis, winner of HTC J Butterfly Vs Nokia Lumia 920 is HTC J Butterfly. Share your comments if you wish to discuss any aspect of this analysis.