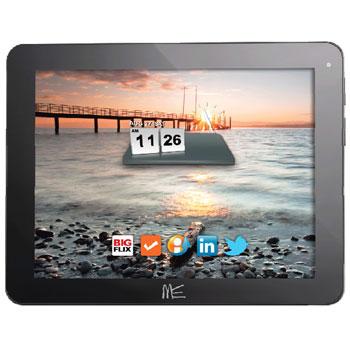 What is a tablet

A tablet is basically a handy PC which is being used as a portable device these days. The profitable multipurpose electronic tablets were first used in 20th century. It doesn't allow the users to worry about the basic hardware requirements such as keyboard, mouse or wire cables as needed for a PC or Laptop. The special feature of a tablet is that it can be carried anywhere easily. If needed, a tablet can be connected to a wireless keyboard or mouse or even through an USB port. Tablets are effectively operated by our fingers that act as mouse and cursor which mostly attract the teenagers to work on it. It has a virtual keyboard, which can be hidden as we find in our smartphones.

In the recent years, Apple Inc launched iPad which hit the markets to a high success for its ease and convenience in use, especially for the people who had to be on the move quite often. Internet lovers like to have a tablet which is generally used for viewing the latest videos, news, movies or new technological products etc and for playing video computer games. Apple iPad is one of the leading products in the tablet category these days. Tablet is a wonder device that everybody likes to own in the modern days computing world.

HCL is one of the foremost of those seven companies of Bloomberg technology which became the leading IT Company in India in 1986. It has produced many computer products, iPads, Tablets, laptops, etc.
One of the recent products launched by HCL is a new HCL ME G1 at an affordable price of Rs. 14,999.

We have observed several 7 inch tablets launched in the markets and now the 10 inch budget tablets has hit the roof. HCL ME G1 device has 9.7 inches IPS display and 1024×786 screen resolution. It weighs about 570g and its dimensions are 238×86×11mm. This device runs on Android Ice Cream Sandwich 4.0.4 Operating System which enables 3G/4G Network connectivity through USB Data card (WCDMA/EVDO). It has 1.2 GHz Dual Core Cortex A9 CPU processor and also has 1 GB DDR3 RAM and internal storage of 16 GB which can also be expandable up to 32 GB via micro SD card slot.

HCL has covered the device in a very sensitive mode, those who have used Android devices will be able to recognize its sensitive skin. It has 7000 mAh capacity which runs through Li-Polymer battery. It also has VGA front camera 0.3 Megapixel and a rear camera 2.0 Megapixel. It also supports high definition video Full HD 1080p. ME G1 has internal flash memory storage up to 8GB. The biggest disadvantage of this device is the absence of Google play store but instead of this HCL has added its own play store called ME app store.

Specifications of HCL ME G1