Micromax after having its successive hits in 2012 with its Canvas 2 and Android smartphone series has geared up with yet another surprise in 2013. This particular smartphone can be said to be the successor of the Canvas 2 series (Android smartphone). This particular smartphone comes with a good lot of features as compared to its previous Canvas 2 phone as said by the Chief Marketing Officer of Micromax Division. He also said that Canvas series is a new born set for Micromax and has tripled their profit since November last year. It is the first of the type from the company that win run on Android 4.1 Jelly bean OS. Since its Canvas series launch in 2012, the company made about 40 to 45 percentage of the revenue shares worldwide covering Indian subcontinent almost 30 percentage. Micromax flagged off the device with its special inauguration committee members at New Delhi yesterday. Those who were unable to buy the A110 from Micromax can surely buy this to supplement themselves with even more exciting features and outlooks. The sleek and trendy smartphone unveiled in a showroom at New Delhi, was handsomely taken upon by few professional tech writers and bloggers on their exclusive experience on using the smartphone for a brief trial period. They said the smartphone has got all the characteristics and design to cut the edge in the year 2013 to give numerous companies a run for their money. Take our glimpse on the features and specifications of the Android smartphone – A116 Canvas HD. 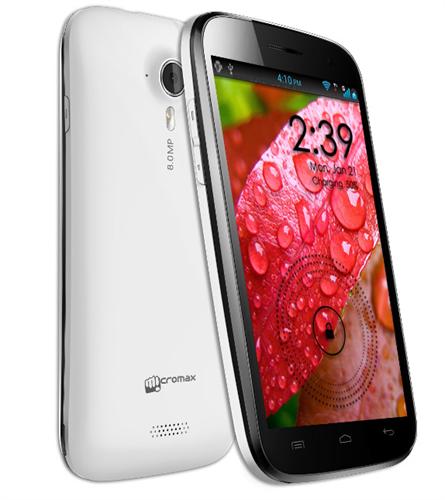 The Canvas HD is a built up of strong operating system, extremely fast processor and multi windows touch screen interface that makes doing multitasking and work with ease of touch. Features that makes it stand out performer as compared to its previous Canvas 2 version are really fantastic and holds a good edge among top Android smartphones of the year. Here's a coverage of its features:-

1. A strong resolution of 1280 x 720 pixels of front touch screen built up. It is a 5 inch HD IPS Touch that makes it flip applications and change work interface at the slightest touch.

2. Powered by a strong Android 4.1 (Jelly bean) and a device that works on 1.2 GHz optimum quad core processor.

3. Rear camera supported with 8 MP resolution and 4X optical zoom to view and click pictures clearly and vividly even from a distant location. It also has a front VGA enabled camera.

4. Superb expandable storage of 32 GB and an internal storage support of 4 GB exclusively in the smartphone. It also has built up memory device that expands the its storage automatically to data storage cards.

5. 1 GB RAM processor having a powerful 5XT GPU series modular transmission device which downloads and load information within a blink of an eye during browsing and surfing.

6. A dual sim smartphone having GSM connectivity feature up to 3G speed, and Wi-Fi enabled device which gives you a net connectivity wherever you go. Bluetooth enabled for smarter exchange of information between different users for flexibility.

The Micromax A116 Canvas HD was launched and showcased in an Electronic showroom of Micromax in New Delhi which witnessed a brief look and review of few tech experts who felt that the Canvas HD was not more than something an Android smartphone would offer as per highlights from the company during its launch. The fast processor Android 4.1 Jelly Bean would be automatically upgraded to the 4.2 version later upon user interface and directions. As per the review experts, the touch screen difference between the both the Canvas series was experienced with the Canvas HD holding an edge. The touch screen looks and interface working was felt smoother and distinctively visible even though few of the touch buttons initially got hanged and never responded. You can change menu settings, flip through your menu pages and change your widget settings quite quickly as compared to the Canvas 2 version of Micromax. The touch screen was quite impressive as quoted by few experts in the recent launch of the phone. The most attractive and glazy look that the device gets only during its lock screen feature. Its lock screen works extremely well giving access to your camera, media files, Google Now and Android access in a short cut way.

The Canvas HD has been a talk for its slim figure. Ever since Micromax started designing their smartphones, their style quotient was blocked due to its fat figure heavy phones, but this one was out from all those critical acclaim that it gets due to its design. It is almost 10.7 mm thin in design, by the look and specification of it overall. Its compact and moderate design comes up with huge modular metal build up body that covers a statement when you hold the smartphone on your hand. The camera working feature was also quite impressed, since the pictures and video clippings were quite well representation even under low light conditions. It makes it an overall good, well characterized Android Smartphone having a steady budget for android lovers. On an overall basis, the Canvas HD is an extremely well organized smartphone covering a good space of it.

The release would be a tough fight in coming days for smartphone arena champions- Samsung as they would look forward with their exclusive launches lined up for 2013 year. Micromax's challenge to the smartphone arena will be hugely accepted when they release the product during February this year followed by a series of launches that Samsung will be up for grabs!

Read our review of Micromax A116 based on the technical specs.

Yes thats right. But Canvas 2 is more popular than Canvas HD. Maybe software integration and price would make a difference in coming days.

I have never owned a Micromax smartphone, but after seeing the performance of Micromax phones over the last year I have become an avid follower of all new phones to be launched by Micromax. They are slowly capturing the smartphone market with great features and affordable price. I would love to own a Micromax A116 Canvas HD smartphone which should probably come at an affordable price of Rs.15000 and booking for the same should start from 14th February'13. The above article on Micromax A116 Canvas HD phone has helped me to understand all relevant details in a convenient manner.

Thank you once again for your message. Talking about Micromax, yes they are capturing the market slowly and transforming a big competition to Galaxy Series of Samsung. The same type of phone is the 'Galaxy Grand Duos' but look at its price, a whooping Rs. 22,000/-

Now what people will prefer? Even Canvas 2 is giving a tough fight here.

Micromax Canvas is a superb phone in the list of "Smartphone". All features of this phone are better than other phones in market with same price. Best part of this phone have its touch screen.