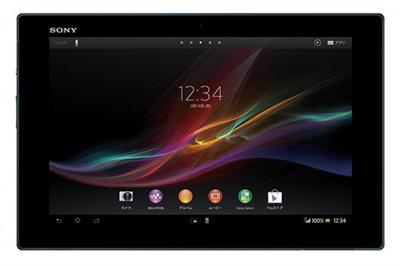 Popular Japanese tech firm Sony has officially announced yet another tablet, the Xperia Z which will feature waterproof and dustproof as seen in Xperia Z smartphone. The tablet will go on sale in Japan in spring 2013. The device which is much thinner than iPad mini is expected to have high demand in the country while the availability for other markets is not much known. Even though reports regarding the existence of the Xperia Z were floating online, tech enthusiasts do wonder why the tablet was not announced at CES 2013 along with Xperia Z smartphone which became the discussed product during mega event which concluded a week ago.

Sony which has already been the fore runner in bringing out innovative ideas and magical designs would be too happy to introduce the brand new Xperia Tablet Z for its Japanese customers. Even though the popularity of Sony tablets are less compared to the products of Apple and Samsung, coming days are to follow the thoughts projected by the company.

Regarding the camera optics, an 8MP Exynos R rear camera and 2MP front camera for video chatting are being added with the Xperia Z tablet. For connectivity Wi-Fi, Bluetooth, NFC and LTE are being added which can transfer data from one device to another. The Mobile Bravia Engine 2 technology will deliver high-brightness and high-definition videos making it more vivid and beautiful. The tablet comes pre loaded with S-Force Front Surround 3D, Music Unlimited and PlayStation Mobile. Xperia Z is equipped with a 6,000 mAh battery which deliver ample backup.

As far as the Indian Even though it is too early to compare Xperia Z with Apple iPad 4, it is much sure that the Sony device will bring a tough competition to iPad 4. The quick specs of iPad 4 are 9.7 inch LED-backlit Multi-Touch display, Apple A6X processor, 512MB RAM, iOS 6 OS, 5MP iSight rear camera, 1.2MP HD front camera, 16GB/32GB/64GB internal storage, Wi-Fi, Bluetooth and a 42.5 Whr Li-ion battery with 10 hours of backup. The price of iPad 4 ranges from Rs 31,900 - Rs 51,900 depending upon the models.

The price of Sony Xperia Z is not officially announced. But if the tablet comes under a less price tag compared with iPad 4, the Xperia Z could be able to find a space in the tablet market.