Temple Run 2, an interesting and popular game originally founded by Imangi studios, was released last month in all parts of the world. Within 24 hours of release, there was a rapid response for the game among the users and the ratings were found to be 4.5 on 5 and almost 2000 reviews were found. This makes evident of the fact that so many people are addicted to this unique game. 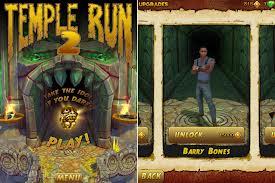 Temple Run 2, an enhanced version of the popular Temple Run 1 in terms of graphics, has hit the market now. This time, the game has featured few more interesting playable characters, special power ups and a doggling monkey to chase you along the temple. The game is intended to be more thrilling than the original one with some special add-ons with a different environment set up. In such a short time from its release, Temple Run 2 has been ranked one among the top 4 games in the application stores, which is completely enthralling. 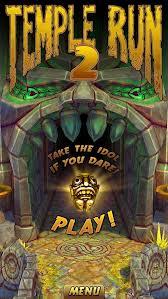 Review and Play Through of Temple Run 2

The main target of the game is to run as far as possible by overcoming all the hurdles and collecting all the bonus points to reach a marginal or good score. Temple Run concept revolves around a group of characters, where one of the character controlled by the player, steals an idol from the temple and passes it to the player. Once the player receives the idol, he is chased by a group of violent monkeys out of the temple, thus initiating the game. During the run, the player is awarded with coins whose value may vary according to the colour. Red coin indicates 2 points and blue coin, 3 points. The user avails some bonus points too, leading to a bonus gauge which is segregated for every 100 coins after which the bonus meter resets itself on its own. The bonus gauge completes successfully after 400 coins. The bonus coins collected by the players in the run, can be spent in the store for purchasing any new items or upgrading the bonus. The player is rewarded with a Mega coin after getting 150 coins, a 2–Point coin after accomplishing 1000 meters and 3-Point coin after 2000 meters.

Temple Run has recently been in action to promote a movie namely, Brave, in collaboration with Disney. Only after this movie's launch, Temple Run got a good trademark for itself. Temple Run 2 has received wide responses from every corner of the world. Gamezebo gave Temple Run 2 out of 5 star rating recently, emphasizing that Temple Run was such a classic video game to experience. PC magazine stated it was a pretty cool mobile application game, especially for the kids, featuring some innovative characters.