The Dell Alienware M14x is yet to be launched after its successful predecessor M11x with a 14-inch screen. The Alienware M14x is adorned with features like trendy design, built-in Wireless HD and a multicolored keyboard. Alienware M14x is going to be back with the bang in a different form with a 14 inch LCD display serving as the ultimate gaming laptop. 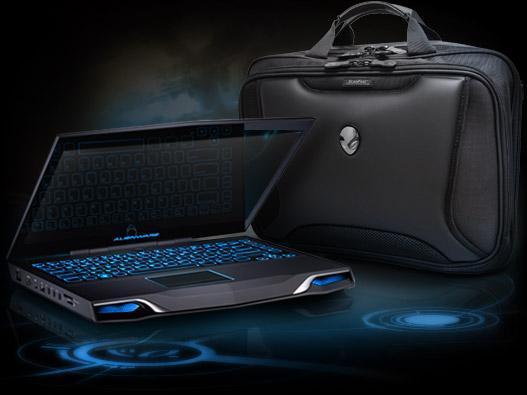 The key features of the device include a very good resolution of 1600*900 pixels and built-in Klipsch speakers in the device for sound effects and comparatively better than the ones in large laptops. This is a significant feature of the device. There is also a special application namely AlienTouch for the touch-pad options which makes it more alluring which was known for its excellent touchpad but the one with M14x is quite different from the usual and it's an advanced one. It supports HDMI, VGA ,GPU and CPU technologies. It has a flawless design, compact size and appropriate weight which makes the laptop handy and portable.

Design
The Alienware M14x weighs 6.4 pounds measuring 13.2 x 10 x 1.5 inches. The back lighting option in this device allows user to change the lighting on the keyboard as per the user's requirements, to choose from a number of color options and also allows to modify the logos and front grill.

Keyboard
The keyboard is spectacular with large keys and gives the user an instant response when pressed. It's effective like Lenovo Thinkpad keyboard. The touchpad offered is also flexible to use provided the necessary options are chosen in the Control Panel. The keyboard sizes 3.2*1.8 inches.

Webcam
M14x Webcam is helpful in capturing images with good clarity and high resolution. It provides fast access to capture snaps of the user and maintains an automated password prompt every time user logs in providing support for the Skype calls.

Software
M14x runs on operating System Windows 7 Ultimate which is an old version.
You can upgrade it to Windows 8.

Ports
The left side of the M14x comprises a 4-in-1 memory card slot, a SIM card slot, two headphone ports and a mic port. There's a chargeable USB 2.0 port, Display Port, VGA and HDMI. On the right are a slot-loading DVD drive, two USB 3.0 ports and an Ethernet port.

Perfomance
The Alienware M14x been configured with a 2.3GHz Intel core quad processor, 8GB RAM and Nvidia Geforce GT 555M processor which performs approximately 4000 times better than the other laptops. The speed of the device is also presumed to be higher than any other mainstream devices.

Battery
The battery quality is also good with a runtime of 4 hours 10 minutes which is normal.

Wi-Fi
There is an extensive Wi-Fi card , Intel Centrino Advanced-N 6250 AGN which produced good results. At 15 feet height, the throughput was rated at 28.5 Mbps which was 7 Mbps below the average scale. At 50 feet, the throughput dropped to 18.6 Mbps which was only 3 Mbps lower than the average rating. Alienware M14x Notebook also comes with a WiMax which allows the gamers to connect to the Internet especially for those who are fed up and exhausted with the low connection speeds.

The release dates of M14X has not yet been introduced but it's soon expected in the first quarter of this year. The device is priced at $1,747.99 which is definitely worth.

Last week, Dell unveiled many awesome models of its Inspiron R and Inspiron R Special Edition Series. Dell also announces its upcoming Inspiron Z Series that claims to be first ultrabook models of Inspiron series. This post covers specification and reviews for all models of both Inspiron R and Z series.

Have you heard of Dell's Alienware 14? If not then you'll get to know about it in this article. I have provided you with a complete review of this laptop. With this piece of electronic you can get the best of gaming experience. And as it is a laptop, you can play anywhere, anytime :)

Are you looking for a perfect gaming laptop? Today, you're going to get a perfect option for your requirement. The Alienware M17x R4-7263BK is a laptop specially designed for playing high-end graphical games. Read the following article to know about the specifications as well as the pros and cons of the laptop.

Dell releases many awesome Windows 8 tablet laptops under its most popular XPS series. In this post, I am covering some ultimate hybrid computing laptops under this series that are now available for purchase in market.