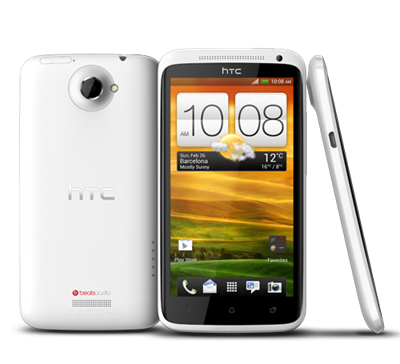 HTC One X is one of the finest creations of HTC in its smartphone array. It is known for seamless gaming visuals, crystal picture quality and lighting web browsing, the reason behind is its quad-core processor. It has minimalist design. Its powerful camera captures even in low light and produces beautiful, vivid, crisp pictures. You can take photos even when you shoot HD video using this phone. The camera of HTC One X is a 8MP one with 1080HD video and imaging, rapid fire continuous shooting, one second start up. HTC ImageChip allows you to capture photos irrespective of movement and lighting. Next comes the audio or sound of HTC One X. It comes with Beats Audio which is the trade mark of HTC. What you hear games, video, music or YouTube, is authentic and rich. This smartphone has 4.7 inch Gorilla Glass screen which is scratch resistant and durable. The design of this phone includes inconic camera ring on the back, a piano gloss sidewall and curved glass. The specifications of HTC One X are:

With Sony Xperia Z, you can enjoy the best of Sony in your hands. It is a HD smartphone engineered to precision. It is available in black at present. It has got OptiContrast panel for crisp images when the phone is on and spotless black look when its off. This smartphone boasts of Exmor RS mobile with HDR for video for beautiful pictures and videos even in strong light, which is considered world's first. It has got fine 13 megapixel camera. It has got lowlight sensors both on back and front. The Superior Auto mode sets HDR and noise reduction automatically when required. The body of the smartphone is 7.9 mm slim one with reflective glass surface. It is also water and dust resistant. It has got IP55 and IP57 rating for water resistant and even can withstand water jets. Its frame is created from Glass fibre polyamide which is used to make automobile parts and its really tough. The glass of the phone is durable tempered glass and much stronger than the conventional one. It has got anti shatter film on front & back.

This phone is designed as OmniBalance which creates symmetry and balance in all directions. The new design skeleton frame holds the phone together on all sides with reflective surfaces and rounded edges. You can share anything on your Xperia Z's screen including videos, photos, music etc. wirelessly. It is possible through One touch mirroring with NFC technology. Also you can watch these items in your BRAVIA TV screen wirelessly with one touch. The performance of the phone is powered by the Snapdragon S4 Pro quad-core processor. It ensures efficient battery use with unparalleled graphics. This smartphone can efficiently be used for the YouTube clips with LTD, for downloading new apps, for Google maps etc. The battery power management is done by the Battery STAMINA Mode in the phone. It improves the standby time of the battery by more than four times. The Sony MH-EX300AP headset with the phone ensures superlative acoustic performance. You have direct access to the PlayStationStore from this mobile. This smartphone comes with accessories like Wireless speaker SRS-BTV5, SmartWatch and Xperia SmartTags NT2.

This stunning smartphone comes with options like Smart Reading, Guiding Wizard, Magic Touch, 4050mAh Super Huge Battery, 0.73 highest screen to body ratio and a 6.1 inch HD Screen. The HD screen of the phone, facilitates optimal viewing experience of anything you see or read in the screen. It can easily fit in to your pocket and has good grip. It has got 1.5 GHz quad-core processor with QPC and ADRX smart power saving technology. Single charging of this phone can last up to 2 days or normal usage. It also has got faster charging capability which reduces the charging time by more than 30%. Its "Magic Touch" feature allows you to use gloves or other wear and still operate this smartphone. It has got high sensitive screen. It also has unique feature for guidance viz., Guiding Wizard which uses AR navigation technology. It has also got other important features like Smart Reading which aids in reading text with access to Wikipedia etc., Easy Panel which includes applications for video playback, calculator, messages, notes etc. and One Hand UI or User Interface which makes you comfortable to use this smartphone.

Huawei Ascend Mate operates in Andriod 4.1 platform. The memory speed is 1.5 GHz quad-core Hi-Silicon K3V2 + Intel XMM6260. It is available in Crystal black and pure white colors. It weighs 198 gms. It has got 2 cameras, 1.0 MP HD front facing one and 8.0 MP AF rear facing with HDR. It has RAM of 2GB capacity. It also has Bluetooth and Wi-Fi connectivity. The video player supports enhanced AAC, AAC+, mp3, MEPG4 and AVI formats. It comes with 3.5 headset connector. It has Gyro sensors.

I have narrated the specialties of the top 3 smartphones in the U.S. market and their salient features. In my point of view, I rate the Huawei Ascend Mate as trendier with lots of user friendly feature. It's a nice fit for the modern times. However, the other two smartphones viz., Sony Xperia Z and HTC One X are good competitors for the Ascend Mate. But I conclude that Huawei Ascend Mate is the clear winner in this race.

How to Update HTC One X with Android 4.1 Jellybean

Here in this article I am going to reveal a fine tutorial on 'How to Update HTC One X with Android 4.1 Jellybean'. Now every HTC One X users are allowed to taste the latest released Android 4.1 Jelly Bean. Perform the below given tutorial with very care and cautious in order to avoid any kind of wrong interfere in between.

I totally disagree with the author. The Huawei Ascend Mate can never beat the likes of Samsung or HTC. As the author said the Ascend Mate comes with this huge battery which is great to keep it going all day long but this phone is packed with neither a 2GB nor a 1GB RAM but with a 768MB RAM which is really disappointing. The onboard storage of this giant phone is just 8GB though it provides for a memory card slot. Actually measuring 6.1-inches, the 1280x720p display on the Ascend Mate is the largest on any smartphone in world & hence it will be a little bit tricky to hold this super-sized handset. The Icons on a Huawei phone has always been too childish though improvements have been made with its Emotion UI.

The HTC One X is no longer the same as it is called the HTC One X+. The '+' added to its name does not mean that it isn't exactly a new handset as such, as it shares many similarities with its brother the HTC One X, but there are a few key upgrades in play here. If you are looking into the HTC One X it has great features such as Great screen, Stunning design, Powerful processor & Quality camera.

Now talking about the Sony 's latest offering to the smartphone world , the Sony Xperia Z, there's no doubt that Sony has stepped up its game with the Xperia Z. From the premium design, the weight and industrial casing and the larger edge-to-edge screen to the high-end Exmor RS sensor and Bravia Engine 2, there's so much that Sony will be able to tout on its marketing literature. Since Xperia Z (like the Huawei Ascend Mate) hasn't hit the markets yet we need to see whether it's going to make it big with the customers.

I conclude that the winner cannot clearly be the Huawei Ascend Mate. There are a lot more things to be taken into consideration like the price tag of this giant phone which is not yet revealed by Huawei. Huawei is still deciding on the countries where it needs to be launched. So ultimately there's a lot more thinking Huawei needs to do.

Hi Sudhib, Thanks for stopping by and making your detailed comments here. All I just wish to say is that individual perceptions differ. You are free to dispute the conclusions of any author who has posted contents in a public domain. Further, I request you to go through my other resources too and share your thoughts there. You are most welcome to share your comments here in Techulator.

I agree with Sudhib, clearly Ascend Mate is not a winner here. Xperia Z has a Full-HD resolution, which is just crazily good! And with Mobile Bravia Engine 2, the display should be one of the best! And yeah, 6 inches is a bit too big. Anyways like you said, its your opinion.

And another thing, you could have chosen HTC Butterfly instead of One X?