Sony, the most reputed brand manufacturer has made a splashing dive into the smartphone market by unveiling a huge number of smartphones under its Xperia Series. Almost all the alphabets have been acknowledged in the Xperia brand and Sony must ultimately be short of alphabets for Sony Xperia Z is already into place. Never mind until we are thoroughly excited with such best smartphones falling into place.

We have handpicked three smartphones that has recently bagged favorable number of hits and we will be quickly taking a look at these smartphones in depth to figure out the best one out of these three smartphones. So we have Sony Xperia J, Sony Xperia Go and Sony Xperia Neo L competing in this tough analysis and hence what we ask you is to just scroll to find out the winner under every aspect researched below. 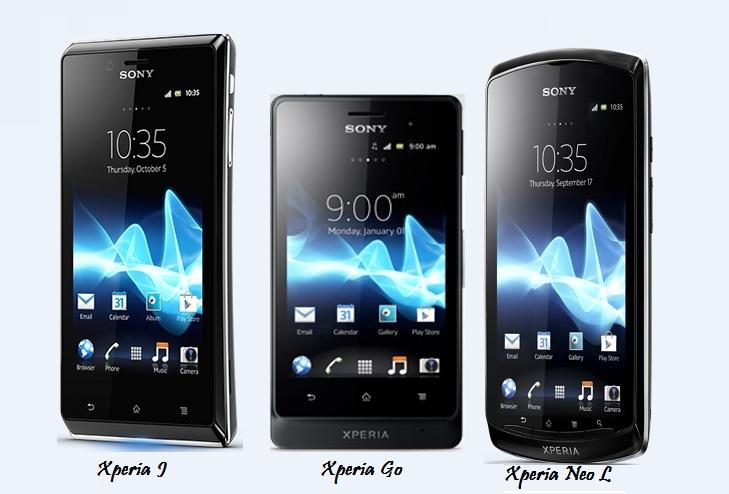 All the three smartphones are powered by 1 GHz processor but Sony Xperia Go carries a slightly appreciable advantage with its dual core capability.

Sony Xperia Go is the lightest of all the three smartphones which is of 110 grams in weight. Sony Xperia J is slightly heavier than Xperia Go which is around 124 grams and the Xperia Neo L is the heaviest around 131 grams.

We wouldn't be able to choose the winner/runner for this segment since all the three smartphones are equipped with a 512 MB RAM that is fair enough for processing the applications smoothly. It could have been better if the RAM capacity had been increased to 1 GB for ensuring much smoother processes.

.
All the three smartphones facilitate A-GPS and DLNA support. They are also commonly provisioned with Accelerometer and Compass sensors. The factor which will differentiate the handpicked winner here would be the FM Radio facility. Sony Xperia J and Xperia Go are equipped with FM Radio whereas Sony Xperia Neo L lacks FM Radio.

It is time for us to come to a conclusion for choosing the best smartphone out of these three. Under these 10 categories, excluding the capacity of RAM since all the three are provisioned with the same capacity, we will be deciding the winner based on 9 categories.

What are your comments on the Sony Xperia Go? Has your ambiguity ended here? Are you looking for more comparisons like this? Keep watching this space for more updates.

This is a nice quote about 3 famous models of Sony smartphones. I like the way, the author has narrated the entire article. The lucid style makes an interesting reading. I indeed concur with the author about the winner Xperia Go.