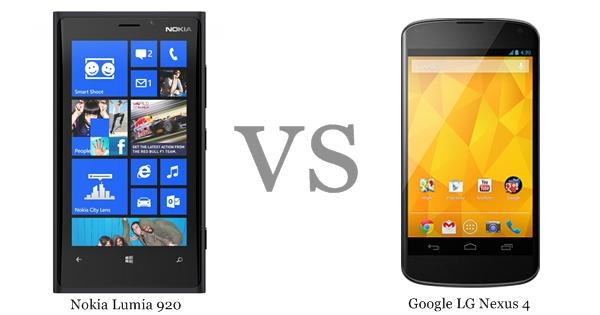 Nokia has just launched their flagship Lumia 920 in India a few days ago and it becomes a rival for many of the phones include Nexus 4, Samsung Galaxy S3, Galaxy Note 2, HTC 8X and also the iPhone 5. Even though the WP8 platform was first tested in HTC 8X, the Lumia 920 becomes the best suited high end smartphone that sports this OS. It skips the already released WP8 phones like HTC 8X and 8S in design, hardware and other areas. But when coming to Google LG Nexus, the game changes because the war becomes against two most popular mobile platforms, they are Android and Windows Phone 8. Latest Android v4.2 Jelly Bean version was first run on Google's Nexus 4. To decide the winner in this comparison between these two, we have to go through in detail of their features and find the main differences between them. So, let's look into that.

Hardware - Again, Lumia 920 sports the Windows Phone 8 and Nexus 4 comes with Android v4.2 Jelly Bean. When 920 is powered by a dual core 1.5 GHz Krait processor, Nexus 4 is powered by a quad core 1.5 GHz Krait processor. A quad core CPU will definitely deliver the maximum speed to the device. In Lumia 920, the chipset (SoC) is Qualcomm MSM8960 Snapdragon while the Nexus 4 is equipped with Qualcomm APQ8064 (S4 Pro) Snapdragon which is more efficient than that of 920. When 920 is packed with Adreno 225 graphics unit, Nexus 4 has Adreno 320. The real thing that makes Nexus 4 the winner in this part is nothing but it's 2GB RAM! Because 920 has only 1GB of that. Winner - Google LG Nexus 4.

Display - When talking about display features, 920 comes with 4.5 inches IPS LCD capacitive touch screen with a resolution of 768 x 1280 pixels. Nexus 4 is equipped with a little bigger, 4.7 inches True HD IPS Plus capacitive touch screen that operates a resolution of 768 x 1280 pixels. Both the devices are packed with the Corning Gorilla Glass 2 screen protecting element and also supports multi touch. But 920 also features Nokia's own ClearBlack display filter along with PureMotion HD+ which makes 920 the winner in this component!

Camera - It would be the big thing that you want to know! Nokia's PureView technology in the camera will be a highlight in 920 for sure. Both come with 8 mega pixel HD cameras that allow you to shoot your memorable moments in the top quality. 1.3 mega pixel front camera is also there in both the devices for video calling. When 920 features Carl Zeiss optics and dual LED flash, Nexus 4 has single LED flash and no optics. Both the phones will shoot 1080p@30fps HD videos with crystal clear clarity. Winner - Lumia 920.

Storage - Here you realize the power of Nokia Lumia 920! Even though both the devices do not have an expansion slot, 920 gives you a whopping 32 GB in-built storage capacity along with 7 GB free Microsoft SkyDrive cloud storage. You can use this cloud memory to back up your files using internet. Nexus 4 comes in two variants in the form of 8GB and 16GB in-built storage capacities. Winner - Lumia 920.

Connectivity - Another big thing is the connectivity option provided in the devices. 920 has 4G LTE support in the selected cities in UK but that does not matter in India as we have no 4G yet. When talking about the available options, you will see that there are no big differences between these two units. Because both are packed with wireless charging, high speed 3G, Wi-Fi 802.11 a/b/g/n with hotspot, NFC, DLNA, GPS, GPRS and EDGE features. If you still want Nexus 4 to win in this part, then version 4 Bluetooth will be little bit more good against the version 3.1 in Lumia 920. Winner - Nexus 4.

Price in India - The big thing, that is the price! Nokia Lumia 920 has just arrived in India at a price tag of Rs.38,000 and now you can buy it online from any of the leading retailers. While on the other hand, it seems the Google LG Nexus 4 is not coming in larger units to India. Because only a few online stores like eBay.in, Rediff.com and Tradus.com have got it for sale and already become out of stock except at Rediff. At Rediff, you can buy it at a price of just Rs.26,490 which is far lower than Rs.31,999 of Tradus.com. When it was in stock at eBay.in store, it's price was around Rs.33,000. But you should also consider the delivery time of Rediff which will be up to 40 days.

So, there you are! Even though the Google LG Nexus 4 overtakes the Nokia Lumia 920 in design and battery back up (ya, still it was only up to a small extent), you can see that Lumia 920 passes over the Nexus 4 in almost all other features. It is just because 920 is costlier than Nexus 4. If you got hands on any of these devices, feel free to drop your views in the comment box below.