Microsoft has finally entered in to the hardware market with the launch of a tablet called Surface tablet. There is much hype about this tablet, so today I am bringing to you its hands-on-review. Whether its design or operating system, every part of this device is too good. This piece of gadget looks really a promising one to me. The main USP of this gadget is that it is backed by the software major Microsoft. This gadget is available in two versions namely 'Surface with Windows RT' and 'Surface with Windows 8 Pro'. Both of them have similar specifications but the operating systems vary a lot. There are some minor hardware differences too. 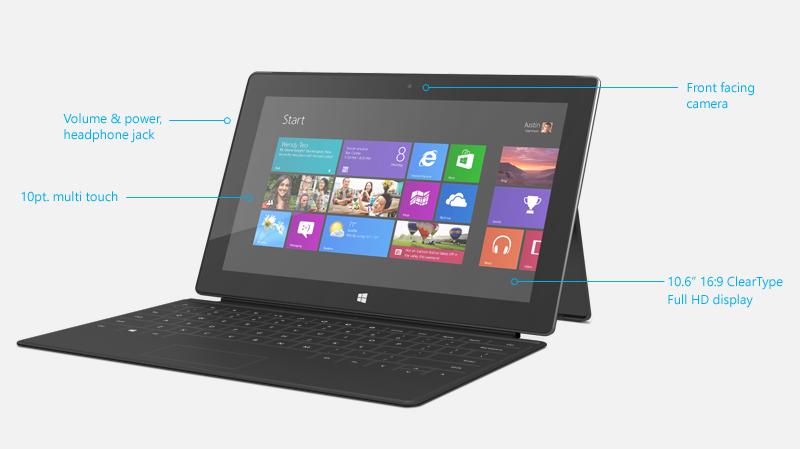 This gadget has dimensions of 10.81 x 6.77 x 0.37 inches for the Windows RT version model and of 10.81 x 6.81 x 0.53 inches for Windows 8 pro model. Although both the versions look alike, the software and some hardware specifications differ. This tablet comes with a 10 inch screen and a front facing camera. On the bottom of this phone, there is a central button for home screen. This button can be identified by an image of windows. Music jacks and SD card readers are provided on both sides of this tablet. The tablet is made of high strength plastic. It has a glossy finish. Windows RT and Windows 8 Pro models have 1.5 lbs and 2 lbs weight respectively. Both are made up of titanium metal for body strength. Windows RT version is for the professionals and Pro version is for the students and regular / normal users.

This gadget is very advanced in hardware and can beat any other leading brand of tablet in the market. I liked some of its specifications very much. Such specs are not available in any other tablet. So let's see what specs Windows RT Surface tablet has.

Now in this section, we will see the differences between the Windows RT Surface with Windows 8 Pro, as I have already discussed about the RT version.

So these were the specification about both versions. You have to pay extra for the keyboards coming with this tablet. 124 GB will cost you around Rs 50000 and cheapest version among them is the 32 GB versions which will cost approx Rs 25000. Now comes the conclusion part.

Now we have come to the end of this review, hope you would have liked it. Price of Microsoft Surface tablet in India is around Rs 25000 but right now, it is not available in the open market. There are plenty of accessories available for this tablet in market. You can play games, movies, hear songs seamlessly without any problem in this device. There are many other options available for you and I have named some of them here. One factor which will decide the success of this gadget is that how differently it comes out from other hybrid tablets available in the market. In my view, this tablet looks very promising to me and will give tough competition to the other players currently available in the market.

Here is the list of other tablets which you can consider:

There's lot of tablet PC for kids available in the market. Many people have bought tablets from here and they commented that here they found more advantage then else. For more information please visit here