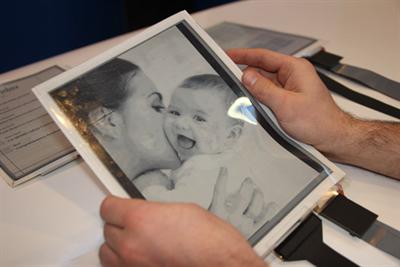 The Consumer Electronics Show (CES) 2013 has become the paradise of new gadgets which are getting unveiled back to back. With almost all major tech manufacturers attending the mega show, a ground-breaking device was spotted and it received viral attention from tech enthusiasts around the globe. 'Born out of mind', a team from Canada's Queen's University developed & dubbed this innovative device in collaboration with Intel Labs and Plastic Logic.

The device uses plastic transistor technology developed by Plastic Logic and has the potential to redefine tablets in the near future. This 10.7 paper-thin flexible tablet PC prototype is a beginning of the momentous change to be seen in future portable products. The tablet which looks like a sheet of paper features a flexible and high-resolution plastic display developed by Plastic Logic.

The PaperTab is powered by the second-generation Intel Core i5 processor which gives fast results. Interestingly, the PaperTab will provide user support for ten or more interactive displays with one display per app in use.

Through this facility, users can share information between two PaperTabs by simply tapping them next to each other. Users can flick through the documents by bending the screen or joining them together for a bigger display. As seen in the interface of PaperTab, a user was sending a photo by tapping one PaperTab having a draft email while the other device showed a photo.

The photo is later automatically attached to the draft email which can be eventually sent by bending the top corner of the display. Moreover, the PaperTab displays thousands of paper documents which can eventually reduce the need for computer monitors and printouts. The light weight PaperTab is easy in use and gives a magazine-like reading experience to the customers.

The electromagnetic tracker provided with PaperTab can be used to track location. Moreover, documents set in the tablet can be opened by simply touching a document icon or another. According to past predictions, within five to ten years, tablets would look like sheets of printed color paper. As the device is not yet commercially available, the price and other details are unofficial information.

Searching for eReader apps to read your eBooks on your Windows 8 device? Read our article for the list of the some of the best Windows 8 eReader software apps in Windows 8 store.

Ever wondered how students can develop themselves with smart gadgets? If yes, then read our resource which shows the top ten essential gadgets for tech freaky students. The list displays the best gadgets which can be utilized by students during their college or higher secondary grades. The usage, important characteristics and device functionalities has been explained in detail.