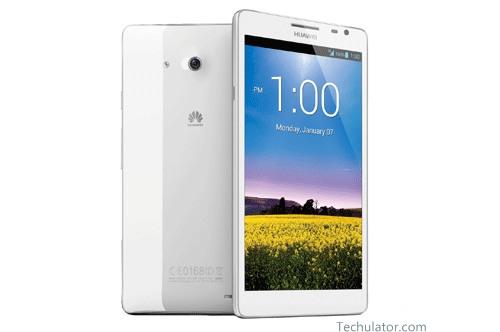 The Consumer Electronics Show (CES) 2013 has got a kick-off today at Las Vegas, US and many of the innovative devices have been announced today itself. The list includes the new WB series smart cameras of Samsung, new Xperia releases of Sony and also the Ascend Mate phablet from the Chinese brand Huawei. In fact, it is the biggest phablet ever seen by the world. It comes with a massive 6.1 inch TFT LCD capacitive touch screen with HD 720p quality. Having too expensive elements, this device must have an expensive price tag too. Even though there were no clues about the price from Huawei in the announcement, it is expected to have a price tag of Rs.30,000 when it arrives in India in February. Along with Ascend Mate, Huawei also announced the Ascend D2 which packs 5 inch Super Retina IPS capacitive touch screen. Below is the features and specifications of the Mate.

As you see in the image, Huawei has done a very good job in designing it as it looks really great! It is 163 mm in length, 85.7 mm in width, 9.9 mm in thickness and weighs 198 grams. It is a microSIM supported phone that sports the latest Android 4.1 Jelly Bean operating system and is powered by 1.5 GHz Quad core processor. It will have a v4.2 Jelly Bean upgrade also. Huawei's own K3V2 chipset is built in this device to reduce the job of the processor and to make the display efficient for stunning 3D gaming. Ultra fast performance is guaranteed with a massive 2GB RAM packed in this beast!

The device has 245 ppi pixel display density on a 6.1 inch TFT LCD capacitive touch screen that has a resolution of 720×1280 pixels. Crystal clear HD display can be delivered on this 245 ppi screen. Also the display has multi touch support and Corning Gorilla Glass protection for resisting scratches. About the camera, it is packed with two cameras, an 8 mega pixel back camera which is capable of shooting full HD 1080p quality videos. It also features auto focus and LED flash. In addition, you can make video calls and chats using it's 1 MP front facing camera. This phablet comes with Accelerometer, Proximity Sensor, Ambient Light Sensor, Magnetometer and Gyro Sensor.

Also Check Out: Huawei Honor 7; A Complete Review You Need Before Buying

For connectivity, you have got high speed (up to 42Mbps) HSDPA 3G, Wi-Fi (Direct & dual band), GPRS, EDGE, Bluetooth, GPS and also a microUSB port. The device comes with a whopping in-built storage of 32 GB so that the 2 GB RAM will be very useful for the device not to have any lags while running big sized apps. The battery inside the Ascend Mate is of 4050 mAh but no official information are available of the back up. The Dolby audio technology used in it will enhance the audio quality in it's music player. Also a MIC noise reduction technology is used in this smartphone tablet from Huawei.

Launch and availability in India

Being a Chinese brand, Huawei will first launch it in China in the last week of this month. The expected launch in India will be in February and the price expected is around Rs.30,000 when considering the expensive elements of the device.

This week, Huawei launched their 6.1 inches 5 point touch display Ascend Mate smartphone in India. This is an Android machine with a quad-core processor and strong 4050 mAh battery. Read this post to get specifications, price and purchase information of this smartphone.

Are you thinking of buying Huawei Ascend Mate recently released into the Indian market at a price of Rs.24,900? The smartphone has been termed as a cinematic wonder with its large display of 6.1 inches and high end features. Read this article to know about the review, features, specifications, price deals and availability in India of Huawei Ascend Mate.