If you really want to have fun and that also in space then you surely have to think about this brand new game which has arrived on Facebook which is called Gemmings Rush. If we believe in the concept of this game then words are very powerful as they can start a war and end it as well and also you will have the power of creating whole new cities and in a matter of seconds it can get destroyed as well just by the use of words. You can also build up a station in the space, isn't that crazy!

If this all doesn't sound you interesting enough then a robotic cyclopean which is a frantic will surely do. Gemmings Rush is a unique match-3/ word game hybrid which has been recently launched on Facebook. It is really a fun game which will surely make you love your power of using words. Mainly the game is about spelling the proper words and matching the right gems to release powers to help you proceed in the game. The game take place in a space station where something has really got wrong and messed and you have to correct it by matching the gems and words properly to set everything right and back to normal. 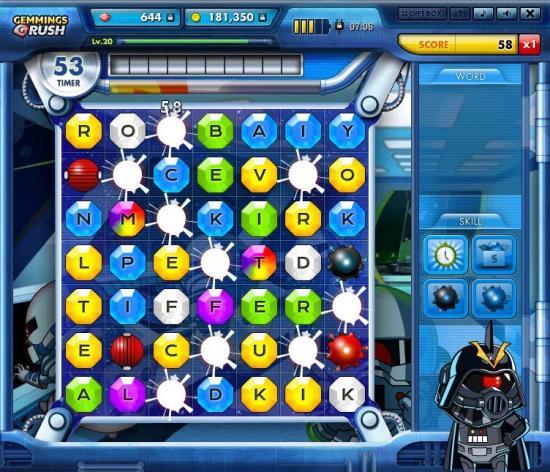 If you want to travel in future then that is only possible if you are able to find the consonants that are hidden in the shiny things. I found the game very easy to learn, but I do think that it should have a proper tutorial so that it will guide us in a proper way. I would suggest you to go slow at the start to grab the concept of this fun game, once you get hold of it then it will be quite very easy for you the spell the words within the time limit that the developer of the game have provided. And the thing is that if you are good enough then you can also try for the bonus points which appear after every level of the game. 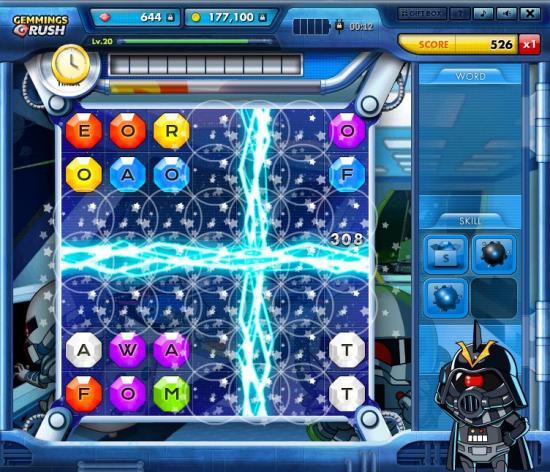 At the very start of the game you will be offered a grid of colorful gems in which letter is hidden, once you click one of them then the gems which are of same colour will get lighten up and the rest of the gems will go dark and you have to spell the word which is relevant to the colour of the gems and with the letter in it and if you manage to spell the word which is correct then the gems will explode and you will win points and the frantic looking guy in the bottom right will happily clap for your smartness. If you are able to keep a good speed of spelling the proper words then you score will get double and will get combo of score which you double up your chances of completing the game faster. You will get sixty seconds to spells as many words as you can.

The game is quite repetitive after a while and the music is very bad, but I really liked the graphics which are cute with that robotic guy dancing in the corner. And if you want to cheat then you can use the gold that are on the Facebook to increase your time limit and you can also purchase some more cheats like blowing up the gems for you and clear the entries row or columns so that you can spell the correct words instead of anything that comes in your mind. It is surely a fun game and I am sure that you will get addictive to it at the very first start.