Two more Android OS Sony smartphones, Sony Xperia Z and Sony Xperia ZL are going to be launched in the market shortly. Lot of smartphones have been released by various manufacturers to capture their market place this year. 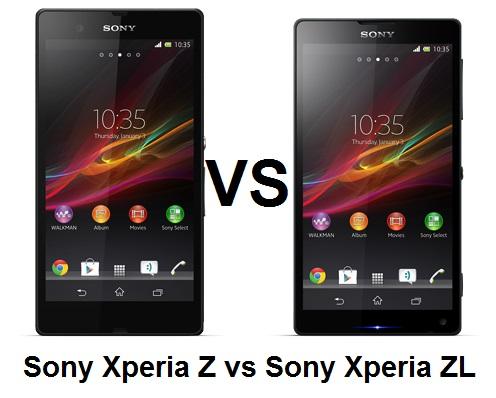 Sony Xperia Z is a Dual SIM smartphone with 3G support; has been launched in January, 2013. It has a resolution of 1080 pixels width and 1920 pixels height with 441 ppi pixels density and supports multi touch facility like any other Xperia smartphones. It has Timescape UI facility. It has a 16 GB internal memory with 2 GB RAM and supports an external memory to 32 GB with memory options for data storage. We can install and store a lot of applications and games to internal memory. It has WLAN, Bluetooth and Micro-USB facilities to share data with other devices. It has 13 mega pixel primary camera on the rear side of the phone with auto focus and LED flash facility and a secondary camera on the front side of the phone for video calling feature. It is a premium smartphone like Galaxy Note II and Galaxy S III. It has video recording feature with 1080 pixels at 30 frames per second. Sony Xperia Z runs on Android v4.1.2 Jelly Bean operating system and is powered by Quad core 1.5 GHz krait processor, featured by Adreno 320 GPU for multi-tasking and better gaming experience. Sensors like Accelerometer, gyro, proximity and compass are available. It has HTML5 supported web browser for better browsing experience with Adobe flash facility with GPS, Java and Radio facility. Ity's available only in Black with SNS integration facility. The battery details of Sony Xperia Z is not yet available.

The price of Sony Xperia Z is not yet announced. This article may be reviewed after te announcement of specifications by Sony.

Sony Xperia ZL is another smartphone from Sony with 4G facility. The features are almost same like Sony Xperia ZL. It has a resolution of 1080 x 1280 pixels with 441 ppi pixels density with multi touch facility with 16 million colors. The screen is protected by Shatter proof and scratch-resistant glass and touch is featured by Timescape UI with Sony Mobile BRAVIA Engine. It's memory is available in two formats, 16 GB and 32 GB with 2 GB RAM facility. It has an external memory support up to 32 GB. Sony Xperia ZL has WLAN, Bluetooth, NFC and Micro- USB facility with 4G support. Sony Xperia ZL has 13 mega pixels primary camera on the rear side of the phone with autofocus and LED flash facility and 1.3 mega pixels secondary camera on the front side of the phone for video calling. It has video recording feature up to 1080 pixels; 30 fps through rear camera and 720 pixels at 30 fps through front camera. It runs on Android Jelly Bean operating system and featured by Quad-core 1.5 GHz Krait processor and Adreno 320 GPU. The battery details are not yet available.

The price and availability details of Sony Xperia ZL are not available yet. This article will be updated we have details.

I don't believe anything of this. For example the Z has 4G.
http://www.sonymobile.com/gb/products/phones/xperia-z/

I think you are mistaken. Xperia Z is a 3G phone and Xperia ZL is a 4G phone. Check article properly.

How on earth did I end up on this windows 89 website?

I use my Xperia Z on 4G on EE in the UK, please edit article to not lead people astray, who knows views might get into double figures!