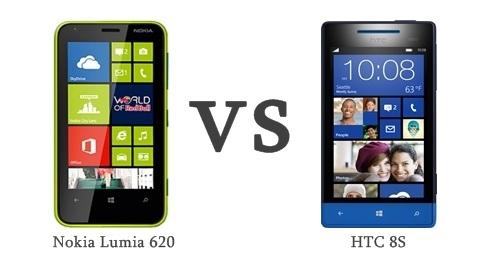 So, finally the race is on and it's flag off now! The Nokia Lumia 620 is going to release in the next January in India to compete with HTC 8S, both of which sport Windows Phone 8 operating system. In fact, both these phones are packed with almost the same features. We can find only a few differences between them and those are what we are discussing now. HTC 8S is already released in India with an arrogant price tag of around Rs.19,000. At any place, this price tag does not satisfy the features of this device. HTC lovers around the globe were shocked after seeing it's price as it has neither a secondary camera nor NFC (Near Field Communication). But the good news is that, the 3rd WP8 OS phone of Nokia, the Nokia Lumia 620 has them all and asking a cost of just Rs.13,500 approximately which is too affordable with it's awesome equipments. Now let's compare them in detail.

Let us find the winner for each component by looking at the difference between them. As I said above, both the phones run on Windows Phone 8 OS.

Also Read: What to expect from Windows 10 on your smartphone

As you know, RAM is a very important component in a smartphone which is required for carrying out everything with good speed and without lagging. Both these phones have 512 MB RAM which is not too good but best within the price tag of Lumia 620. While HTC 8S has an in-built memory of 4GB, Lumia 620 gives the double, that is 8GB internal memory which is more without any more price. About external storage, where 8S equips a microSD expansion slot of 32GB, 620 has it's double in this too, that is 64 GB whopping memory! Winner - Lumia 620.

As you know, HTC is famous for their designs and looks. Their build quality is such an amazing thing which gives attractive looks to the smartphone. Here, 8S is 120.5 x 63 x 10.3 mm in dimension and weighs 113 grams. Nokia Lumia 620 has a dimension of 115.4 x 61.1 x 11 mm and wighs 127 grams. Both have only micro SIM slot and don't have a regular SIM slot that you should have noted. Back side of HTC 8S is made up of soft-touch plastic and you can pulled off the top strip to insert microSIM and microSD card in their respective slots. In Lumia 620, the switches for power on/off, camera and volume adjustments are in the right side while the 3.5mm audio jack and microUSB port are there on top and bottom respectively. The main body is made up of glossy plastic which does not feel better than 8S. Winner - HTC 8S.

Both are having 5 mega pixel camera with LED flash and 720p@30fps video recording. But Lumia 620 has an additional VGA front camera for video calling. Actually 8S is in-built with Skype app, but it becomes useless without a front camera. Additional cam features are same in both devices, such as geo-tagging, touch focus, face detection etc. Winner - Lumia 620.

Except the NFC feature, everything is similar in both the phones. Both have 3G, Wi-Fi, microUSB port and GPS and don't have Wi-Fi tathering or hotspot. When comparing the 3G HSDPA speed, Lumia is capable of delivering 21.1 Mbps while 8S will give you only 14.4 Mbps. I don't think that NFC is must since we have Bluetooth but many of you will still need it as an addition. Winner - Lumia 620.

8S wins this time too as it has 1700 mAh non-removable battery when comparing the 1300 mAh replaceable battery of Lumia 620. After tested by users, it is understand that 8S keeps the charge for the whole day with 3G and up to 2 days without 3G. Lumia 920 has to be tested to know the exact power consumption but it is displayed as up to 9.9 hours with 3G in the official website of Nokia. Winner - HTC 8S.

Finally the big thing, that is the cost! 8S was launched in India with a price tag of Rs.19,000 but it may be dropped just like what happened in the case of HTC Radar. Radar was released with a price tag of Rs.23,000 in India but then slashed up to Rs.15,000 because of the same condition as of now. The price of Nokia Lumia 620 is not confirmed but it is expected to be around Rs.13,000. Having what are there in 8S and more than 8S makes Lumia 620 a more affordable WP8 phone to be released in India. Winner - Lumia 620.

So, that's it! I will always suggest you to wait for Lumia 620 if you are about to buy HTC 8S just because of the above said reasons. Have a nice time.