Here in this article I'm going to reveal the complete features and comparison of 4 low cost Android tablet with GSM support. The tablets that i have chosen are priced below Rs.10,000. If you were searching such kind of low cost tablets with calling feature, then this article will be more helpful to you. The list of the tablets that I'm considering are given below: 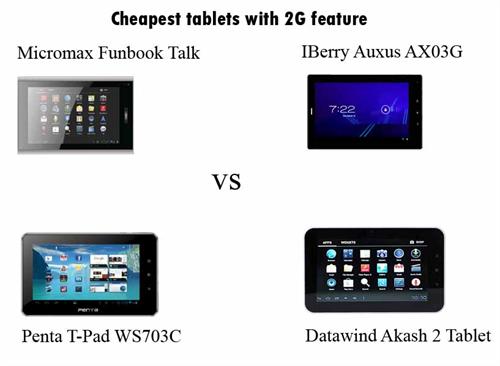 The device comes with a dimensions of 192x122x10.5 mm and weighs 225g. Next is the display feature, the Micromax Funbook Talk comprises of 7 inch TFT LCD Capacitative touchscreen display which supports 16M colors. The screen resolution of the display is 480x800 pixels. The display also supports multi-touch facility. Accelerometer and G-sensors are the sensors used by the device. The essential part of a tablet is its Processing Unit. The device uses a CPU 1.0 GHz Cortex A8 processor and for graphical support it also uses Dual Mali-400 2D/3D Core processor. Since it has graphical support HD games can also be played n this device. The tablet works on the platform of Android i.e, it uses Android OS, v4.0.4 (Ice Cream Sandwich) to operate. As an external storage feature the tablet supports in using microSD card and it can be expanded to 32GB. Other than these it also uses an in-built memory of 4GB and a RAM of 512MB DDR3. Camera capability of this device is amazing. It has a 0.3MP camera in its front which supports digital zooming and video recording. It also supports video calling. As a connectivity feature it supports GPRS, WiFi (Wi-Fi 802.11 b/g/n), 3G (only via external USB Dongle), USB, HDMI. The Micromax Funbook Talk uses a 2800mAh Li-Ion battery which offers a talktime upto 5hours and a standby upto 112hours. The main feature of this device that we need to consider is its calling feature i.e, it supports GSM which means SIM card can be inserted and also supports the GPRS which helps us to use internet service in 2G speed. The price range of the device is Rs.7,149 - Rs.7,990.

Datawind is brand of the Akash 2 tablet and it is also known as Ubislate 7+. The tab uses a TFT Capacitative touchscreen display with 7 inch size. It has a screen resolution of 800 x 480 pixels. It is a great thing for us that it supports multi touch feature. The front camera of the device is featured by a VGA quality one which supports zooming and video recording. It supports video and image formats like MP4, FLV, AVI and PNG, JPG, BMP, TIF, GIF. The operating used in this is Android OS, v2.3 (Gingerbread). The important thing in the device is its SIM support i.e, it supports phoning functionality and also supports the GPRS which help us in using internet feature at 2G speed. The other connectivity features supported by this device are WiFi, USB and 3G(only via external USB dongle). The complete processing of the device is controlled by the Cortex-A8 700 MHz Processor. Just like the other tablets it also supports microSD card. The internal memory of this device is 2 GB and the RAM is of 256 MB. A Li-Ion battery of 3200mAh is used which delivers a talktime upto 4-5 hours. The best price of the Datawind Akash 2 tablet is Rs.3,979.

The Penta T-Pad WS703C is an Android tablet which have an inbuilt 2G SIM slot that uses a multi touch capacitive display touchscreen. The size of the display screen is 7 inch and the screen resolution is 800x480 pixels. G-sensor is the only sensor used in the device. It is great thing that the tablet comes with two cameras, front and rear one. Both of them are of VGA quality and they support in video recording and digital zooming. The video formats supported by this device are AVI, H.264, DIVX, XVID, RM, RMVB, MKV, H.264, DIVX, DIVX, XVID), WMV, MOV, MP4, H.264, MPEG, DIVX, XVID), DAT, DVD), PMP,MPEG, MPG, FLV, H.263, H.264), ASF, TS, TP, 3GP, MPG etc. Android OS, v4.0.3 (Ice Cream Sandwich) is the operating system used by this tablet. So almost android applications can performed in it. It supports not only applications but also 3D games since it uses a GPU of Mali 400 3D. Apart from this the tablet also uses a CPU of Cortex A8 1.2 GHz Processor. A 3000mAh Li-Ion battery is packed with this device and it gives an average battery backup. In order to use several application the device should need better specs in its memory capacity. The Penta T-Pad WS703C supports bothn internal and external memory. The device uses an internal memory of 4GB and a DDR3 RAM of 512MB. The connectivity features like Bluetooth, WiFi, USB, HDMI, 3G (via external USB Dongle) are supported by this device. The price range of Penta T-Pad WS703C is from Rs.6449 to Rs.6999.

The iBerry Auxus AX03G is a product manufactured by iBerry. The tablet is featured with a WVGA LCD Capacitive Touchscreen display of 7 inch having a screen resolution of 800x480 pixels. The display also supports multi-touching facility upto 5 points. Accelerometer, Gravity and Motion Sensor are the sensors used in the device for necessary purposes. The tablet supports dual camera feature, the rear one is of 2MP and the front one is of VGA quality.The device also supports digital zooming and supports in 3D video and HD video recording at 1080p and also supports video calling. The device offers an excellent battery backup since it is using a Li-Po 4000mAh battery. The latest version of Android OS is used as its operating system, i.e, Android OS, v4.0 (Ice Cream Sandwich). It also has a Adobe Flash Player 11.1 Support and also supports 3D gaming. The device comes with a complete storage of 24GB i.e, 8GB internal storage and 16GB external storage. The external memory can be expanded upto 32GB. A 1GB DDR3 RAM is also used. The connectivity features supported by the device are GPRS, Bluetooth, WiFi, USB, HDMI, 3G (HSDPA). As the processing unit the device uses a CPU of 1.0 GHz ARM Cortex A8 processor and a GPU of Mali-400 OpenGL 2.0 which gives a graphical support to the tablet. The main thing of this tablet is its support to calling feature. The operating frequency of the tablet is GSM 900 / 1800 / WCDMA or HSDPA 2100 MHz. The price of the tablet iBerry Auxus AX03G is ranged from Rs.10000 to Rs.11000.

Now you are aware about the complete features of these low cost Android tablets with 2G support. Now it is the time for you to choose the best one. By comparing all their features you can choose the best one. But i will share my point of view. I will choose 2 best tablets from these products. But it doesn't denotes the others are the worst one. Actually I'm fond of these 4 tablet computers, but in my opinion the best one is iBerry Auxus AX03G since it has better features as compared to the others. Apart from the other tablets this one has so many additional features, but this one is too costly as compared to the others. The other one that i liked the most is the Micromax Funbook Talk, which is quiet cheap in its price and also has so many features in it. Now its your turn to choose the best one.

This article deals with low cost Google Android tablet PC available in Indian market. Starting from the introduction of tablet PCs, they are in much demand due to almost all capabilities of PC and phone which are integrated to single piece and named as tablet PC. People nowadays try to use cheap Google Android tablets and want to get all experience of tablet in low cost.