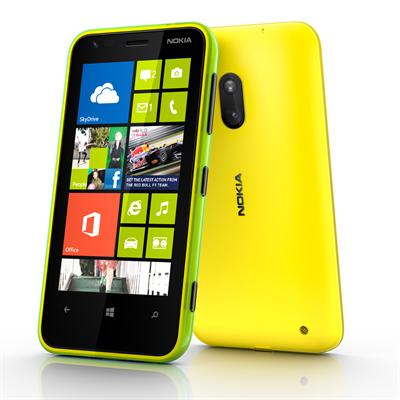 Well, Nokia has got a big refreshment after the arrival of Windows Phone 8 operating system. They are now gearing up to rule the whole smartphone market in India with their new and affordable WP8 phones. HTC is the only competitor presently for Nokia with WP8 OS. When HTC makes less featured phones with higher price tags, Nokia offers the best at the lowest price tags. After Nokia Lumia 820 and Lumia 920, now the third one with WP8, the most affordable one, that is the Nokia Lumia 620 is going to be released in the early February in India with a price tag of around Rs 12,450 which is too low when considering the stunning features it equips with. The main competitor of the Lumia 620 will be the HTS 8S which holds almost the same features. But the situation of HTC 8S is worst now and is almost lost in the match before it starts. It is just because of the higher price tag, around Rs 19,000 which is not at all matching with it's features.

The Nokia Lumia 620 will be available in 7 different colours and the back shells are interchangeable, so that you can change the dress of your phone whenever you want to! And just like other two WP8 Lumia phones, it also comes with only micro SIM slot. Along with the Windows Phone 8 OS, it runs with 1 GHz dual core Krait processor and 512 MB RAM. It is more stylish in looks, 115.4 x 61.1 x 11 mm in dimension and having 3.8 inches ClearBlack TFT capacitive touchscreen. It works with Adreno 305 GPU that reduces the work of processor and enhances the display for 3D gaming purposes. When comparing with HTC 8S which has 4GB internal storage, Lumia 620 gives extra 4 GB, that is 8 GB in-built memory along with an expansion slot of a whopping 64GB. Also you have 7 GB free cloud storage in Microsoft's SkyDrive. This will definitely attract the customers towards the phone. The NFC feature that was absent in HTC 8S, will also be one of the important pros in this phone.


About the camera, even though there is a 5 MP primary camera with auto focus, the secondary camera is VGA. HTC 8S had no secondary camera and hence is another pro of Lumia 620. It's camera features LED flash, geo-tagging and 720p@30fps video recording. This phone uses Dolby sound enhancement feature which is far better than Beats audio enhancement in HTC 8S. Along with NFC, you have several other options for connectivity such as 3G, Wi-Fi, USB, Bluetooth, GPRS and EDGE. Lumia 620 is equipped with Accelerometer, Ambient Light Sensor, G-Sensor and Proximity Sensor. This phone uses a standard Li-Ion 1300 mAh (BL-4J) battery that keeps a talk time up to 14 hours and standby up to 330 hours. So, you will now understand why Nokia Lumia 620 becomes the winner when HTC 8S being the opposition.

Nokia Lumia 620 seems to be a great phone looking at the specifications. I liked the fact that there are a lot of interesting features in such a low price. I am also really impressed with the 5 MP camera and 720 P video recording with 30 fps. I think there is no phone with such a configuration and such a low price. Nokia has done a very good job.

Yes, you are right. It will rock in the markets for sure.

Hi TEC Blogger, your article on Nokia Lumia 620 is nice, but where can I find the information about the release date of Nokia Lumia 620 in this article? Please clarify. Also please add the dealer's location etc. regarding the availability. Thank you.

The release might be in this month and is clearly written in the first paragraph itself.

Thats right TEC Blogger, now we are in January, 2013 and thats why I asked whether you can add the specifics by editing your article here in Techulator.com . No offence meant to the author.

The long awaited Nokia Lumia 620 that was expected in the first week of February has finally revealed some indications in regards to its entry into the market. Flipkart has listed Nokia Lumia 620 for pre-order at a price of Rs 15,199 and the availability is tagged on the portal as 2nd week of March.