There is a huge competition these days in the mobile market. Every other brand is launching new innovative gadgets. Samsung, the leading brand in gadgets, recently launched the new Android smartphone Samsung Galaxy S III. This smartphone has amazing features and specifications. When it comes to performance, Android smartphone Samsung Galaxy S III leaves other mobiles like Nokia Lumia 920 and Sony Xperia J far behind. Like Samsung, Google has also launched a new mobile phone-Google Nexus 4. Google has come up with a smartphone which offers extraordinary specifications at a reasonable price. Both the mobiles are now available in the market and have micro SIM option. 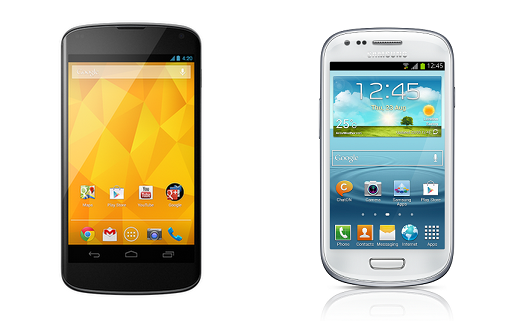 Differences in between Google Nexus 4 and Samsung Galaxy S III:

Differences in between these two gadgets can be observed on specifications discussed below.

Display
Galaxy S3 has super AMOLED capacitive touchscreen with the resolution of 720 x 1280 pixels. Galaxy S3 has a good pixel density of 306 PPI and a 4.8 inches display well protected by the Corning Gorilla glass. Nexus 4, on the other hand, has True HD IPS Plus capacitive touchscreen with the resolution of 768 x 1280 pixels. Display of this mobile phone is 4.7 inches and like Galaxy S3, this phone too is protected by Corning Gorilla glass but the pixel density of this mobile is greater. So, clearly we can say that Nexus 4 has better clarity than Galaxy SIII.

Camera
Galaxy SIII has an 8 MP camera with the resolution of 3264x2448 pixels. The features available with the camera are autofocus, LED flash, Simultaneous HD video & image recording, geo-tagging, touch focus, face & smile detection, image stabilization and HDR. You can also record videos with 1080p HD. Its 1.9 MP front camera has a 720 P resolution. LG Nexus 4 has an 8 MP camera with same resolution as Galaxy SIII. It has a 1.3 MP front camera. The camera of LG Nexus 4 mobile also has features like Touch focus, geo-tagging, face detection, photo sphere and LED flash. When it comes to number of features, Galaxy S3 leads Nexus 4.

Galaxy S3 supports MP4/DivX/XviD/WMV/H.264/H.263 player formats for video files and MP3/WAV/eAAC+/AC3/FLAC player formats for audio files. It has 3.5mm jack for headset. Nexus 4, on the other hand, supports MP4/H.264/H.263 player formats for video files and MP3/WAV/eAAC+/AC3 player for audio files. Both the mobile phones have social apps like Facebook, Twitter and Google Talk. If you are a gaming lover, you will really feel the difference in Galaxy S3's gaming experience. When it comes to connectivity, Galaxy SIII has GPRS, EDGE, WLAN Wi-Fi 802.11 a/b/g/n, DLNA, Wi-Fi Direct, Wi-Fi hotspot, Bluetooth v4.0 and micro USB v2.0. Nexus 4 has same the connectivity option but in WLAN Wi-Fi, it has Wi-Fi 802.11 a/b/g/n, dual-band, DLNA, Wi-Fi hotspot facility. So, Nexus 4 is a really good mobile phone in overall performance.

Battery
Both the mobile phones have Li-On 2,100 m Ah battery. Battery back-up of Galaxy S3 is far better than that of LG Nexus 4. Galaxy SIII has a stand up time of 580 hours on 2G and 3G but Nexus 4 has a stand up time of only 390 hours. The battery of Nexus 4 is heavier than that of Galaxy SIII. So, when it comes to battery, Galaxy SIII is better because of its lighter weight and longer back up.

So, in this article you must have realized the pros and cons of buying a Samsung Galaxy S3 or Google Nexus 4. These two mobile phones are really good. By this article you must be now able to reach a conclusion and make a smart choice on purchase. I would say, go for Nexus 4 if you are looking for a high performance mobile phone but if you are looking for a big screen mobile phone with good camera quality, then definitely go for Samsung Galaxy S3.