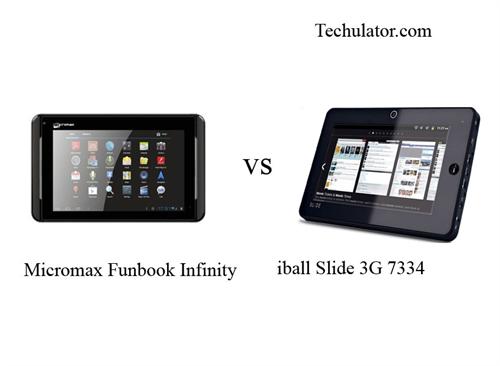 In this section we are going to see the comparison based on the dimension and display feature. The iBall slide 3g 7334 tablet computer is featured with a dimensions of 195 X 121 X 12 mm and also weighs 333g, whereas the Micromax funbook Infinity has a dimensions of 192x122x10.5 mm and weighs 360g. Both the tablets have a display size of 7 inches and they support the multi touch feature. The iBall tablet uses a TFT Capacitative touch screen and the Micromax tablet uses a WVGA TFT LCD Capacitive touchscreen. Their display screen resolutions are not same, the iBall tablet has a screen resolution of 1024X600 pixels and that of Micromax tablet has 800X480 pixels.

By considering the overall display and dimension features, we can conclude that the iBall Slide 3G 7334 is better than Micromax Funbook Infinity since it is much lighter in its weight and also have a better screen resolution. But their all other features except these are almost same.

The iBall Slide tablet uses 1.0Ghz ARM Cortex A9 processor. But the thing is that it is has only a Central Processing Unit, it doesn't uses any processors for its Graphical Interface. The Micromax infinity comprises of 1.2Ghz Cortex A-8 processor and it also uses a a Dual Mali 400 - 2D/3D Graphics Processor for its graphic related purposes. Both the devices uses Android OS, V4.0 (Ice Cream Sandwich) to operate.
As we see that the former one doesn't uses any (GPU) Graphical Processing Unit and the later one uses a GPU, we can conclude that the Micromax Funbook Infinity is better than the iBall Slide 3G 7334 in its processor feature. Since it has a GPU it can be used for high graphical games and such things like that.

In this category we will reveal the comparison based on their memory storage capacity. Both the devices support the microSD card and it can be expanded upto 32gb. The next thing that we need to consider is its internal memory and RAM feature. The iBall slide tablet has an internal memory of 8gb and a RAM of 512MB. The Micromax Infinity tablet has the same RAM feature but different internal storage ,i.e, 4gb.
As we compare the device on its memory feature, it is clear that the iBall Slide 3G 7334 tablet is better than Micromax Funbook Infinity. Because their all other memory features are same except the internal memory, i.e, the iBall tablet has 8gb internal storage whereas the Micomax tablet has only a 4gb in-built memory.

Both devices come with a 2MP rear camera which is capable in capturing images at a resolution of 1600x1200 pixels. They can be used for video calling purpose since they use a front camera of 0.3MP.

As a connectivity feature the iBall tablet is featured by Bluetooth, Wi-Fi(Wi-Fi 802.11 B/g/n ), USB ports, and a HDMI port. It also supports dual SIM feature i.e 2G/3G. At 3G range, the device offers a downloading speed of 7.2Mbps and an uploading speed of 5.76Mbps. But the Micromax Infinity tablet doesn't support features like Bluetooth, GPRS, Edge, HDMI except WiFi (Wi-Fi 802.11 B/g/n) and USB. It also supports 3G but only through USB Dongle.

From this we can state that, in case of connectivity feature iBall Slide 3G 7334 is much better than the Micromax Funbook Infinity since it supports additional features like Bluetooth, HDMI, Dual SIM.

Battery feature is an essential portion that we need to consider. The iBall Slide 3G 7334 uses a 3100mAh Li-ion battery which offers a 3hours of working time. The Micromax Funbook Infinity uses 4000mAh Li-Ion battery which gives a talktime upto 6hours. So it is clear that the Micromax tablet is the one which is better in its battery feature.

After the complete comparative analysis, without any hesitation we can conclude that the iBall slide 3G 7334 is better than the Micromax Funbook Infinity. But I need to clarify that the Micromax Funbook Infinity tablet is not so bad, it has its own features for its price. The price range of the device is Rs.6000-7000. So we need to consider the price also. The iBall slide 3G 7334 ranges its price from Rs.9000 to 10000. Now its your turn to choose the best one for you.

Micromax Funbook Talk P350 tablet price in Indian with specifications and features in this article.

In this article, I am going to describe the Micromax Funbook Infinity P275 tablet with full specifications, features, ratings etc. If you are looking forward to buy this tablet PC, then go through this article and get details about the Micromax Funbook Infinity P275 tablet full specifications, features, ratings and price in India.