All in One PCs from HP :


Most recently HP brought a wide range of Windows 8 products in market, including a wide range of All in One desktop PCs. Each AIO PC from HP comes with a sensor fixed at the base of device for allowing users to log into device in order to transfer files from system. For this, user can swipe out any NFC-compatible device or smartphone equipped with an NFC transmitter sticker to the PC. HP is also shipping two such NFC transmitter stickers within the packing box of its AIO PCs.

Before starting this series on All in One PCs, I had just completed the series on Windows 8 laptops, wherein my first covered HP laptops , second part was covering HP Tablets and the final third part was including convertibles tablet/laptops from HP.

In the list of AIOs from HP, my first pick is Pavilion 20 which is an affordable offer from HP featuring 20-inch screen and wireless keyboard and mouse.

And my second pick is HP Spectre One from HP, a high-end expensive offer PC with 23-inches display, slim body and large internal storage.

HP Pavilion 20 All in One PC 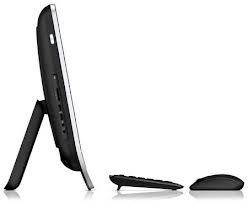 This is an affordable offer from HP with minimum cost among its all AIO PCs. As name suggests the device features a 20 inch non-touch diagonal display with an Ethernet Jack, beats audio speaker, HDMI connector and runs on Microsoft's flagship operating system. The HP PC has a compact design with a free standing monitor with edge-to edge glass.

The wireless keyboard with device provides a clean and wire clutter free working area to users. This model can be a great choice for media works as well as consumers requiring an All in One desktop PC within their pocket budget. It also has a HP TrueVision webcam, HDMI-in port, a Blu-ray drive as well as beats audio support with a TV tuner. User can control photo display, photo slideshows, controlling videos, play music with a remote connected to your HP AIO PC. In addition, they can also perform such tasks with their smartphone or tablet connected to their PC wirelessly.

Running on Microsoft's new operating platform it comes with choice for customer to opt either AMD or Intel processor with up to 2 TB of internal storage and an SSD for fast boot up and boosting up system performance. This HP unit is also capable for handling Windows 8 gestures.

The HP device is available to purchase at Best buy at an affordable price of $499.

HP Spectre One All in One PC 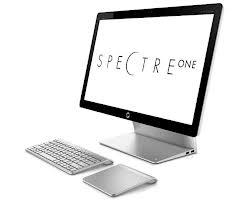 Spectre One is another All in One offer from HP featuring 23-inches large display screen with 1,923 x 1,080 pixels of screen resolution. Equipped with Win-8 technologies the device shows better multi-touch capability. It is also efficient enough to work with any non touch screen display device. HP designed the device to be very stylish and powerful and added a nice trackpad supported by Windows 8 gestures.

It is a prestigious device for having slimmest 11.5mm thin body and proud to be the slimmest among all All-In-One PC releases from HP. This is a NFC enabled device with dubbed GP TouchZone unique feature. The machine runs Intel's latest core processor and a condusiv ExpressCache coupled to 1GB Nvidia GeForce graphics card. It comes packed with up to 2TB of internal storage and a SSD for optimizing system's performance in respect to enhancing boot up time.

The machine is constructed to support multiple connectivity ports such as HDMI connector, Beats audio, 2 USB 2.0 ports, 2 USB 3.0 ports, Ethernet Jack as well as memory card reader too. This device also has a sensor at it base to let user login the Spectre One/ transferring files to system by swiping an NFC compatible device or smartphone. So you can share things like photos, web pages as well as videos on your device with NFC-capable devices.

The HP Spectre One is a high-end AIO machine that will be priced at $1,299 in market.

Other All in One companions from HP

HP also unveiled three other 20 and 23 inches AIO PCs under their most popular Envy series. First Envy 20 device comes with a free standing monitor and edge-to-edge glass and the second Envy 23 comes with flush-glass display as well as 10-point touch touchscreen and the third Envy 20 TouchSmart features an Ethernet Jack, HDMI connector and Beats audio.

For complete details on these three laptops, please visit my next post All in One PCs from HP part-2.

HP Phoenix h9 is the Windows 8 desktop PC model from HP with an ultra thin HP x2401 LED monitor is designed to perform on power-hungry apps. This post covers specs, price and reviews for this desktop PC.

HP All in One Desktop PC's with Windows 8 : Part 2 | Reviews, Features and Specifications

This post covers specs and prices for some of All in One Windows 8 PC from HP. You can purchase these all AIO PCs online from major HP retailers.

Need a clutter free powerful desktop PC? We got our hands on the newly launched HP Pavilion Desktop Mini and decided to check out its features for Techulator. This is a powerful yet lightweight mini PC designed for today's on-the-go generation. Here are its specifications, price, and a video overview for you to see and enjoy.