In this article we are considering the two 3G WiFi routers Micromax MMX 400R and Winknet MF50. Let us compare the two products by each module. 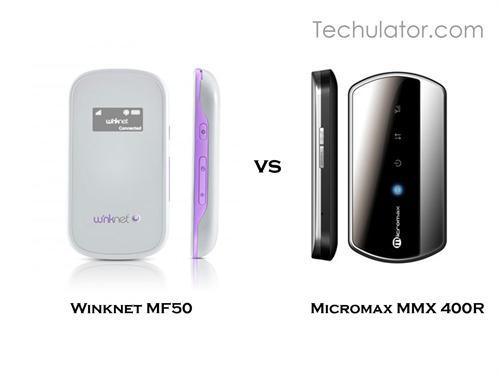 The manufacturer of Winknet MF50 router is ZTE. It is a light router and weighs only 80g. Its dimensions are 4 x 2 x 0.5 inches. The main beauty of the product is its design. The outlook of the device is just like a mobile phone. The color of the device makes it more attractive. It also contains a LCD display which is used for indicating signal strength, battery backup, connectivity status. There are three in-built buttons in the device, they are Power button, Internet button and WPS button. Power button is used for the device startup. Internet key is used for enabling and disabling the internet functions. In order to connect and disconnect the WiFi of the device we can use the WPS button. By holding the Internet key for some time, we can select the manual and automatic connection. The device comprises of two ports, a USB port and a port for connecting additional antenna on the device. Under the battery there is a SIM card slot and a microSD card slot. A 1500mAh battery is used in this that gives a backup of 3 hrs 30 mins.

The Micromax MMX 400R 3G WiFi router is manufactured by Micromax. The device has good looks from outside and it comes with dimensions of 95.5 x 51 x 14.8 mm and weigh 60g. The device consists of 3 buttons for Power, WiFi and Reset used for power on and off, WiFi enabling and disabling and for resetting options. The state of the signal strength, WiFi, network type and power are indicated by the device. As an external interface the device uses microUSB port, SIM card slot and microSD card slot which enables us to insert SIM card and microSD card in it. The microUSB is mainly used for connecting to LAN, charging, etc ... This router also uses a 1500mAh battery, which is capable of giving a battery backup of 4 hrs of continuous using.

As we compare the design features of the two router devices, we can see that Micromax MMX 400R is lighter than Winknet MF50 since it only weighs 60g. Both devices are supposed to indicate the signal strength, status of connection and such things like that, but the Micromax MMX 400R doesn't uses a LCD display to display it and it doesn't indicate the battery strength while the Winknet device is indicating. While comparing the design feature, the main defect that we can see in the Micromax router device is the lack of LCD display and other defect of the Winknet MF50 is the battery backup, in which it only offers a 3.5 hrs of battery backup while the other gives a 4 hrs backup.

Now it is the time to consider the performance of the devices. The Winknet MF50 3g WiFi router can be connected to a number of devices, and it is limited upto 10. We can also connect the device to PC through USB and WiFi. Once device is set on, by pressing the WPS button the WiFi connection can be enabled. After connecting it to the PC, its drivers are to be installed which gives an application that can be used for many purposes like reading the messages in the SIM card, changing the settings option and so on. The device supports Wi-Fi 802.11 b/g/n and WPS. The device operates on the frequency of HSPA/UMTS 2100MHz, EDGE \ GPRS \ GSM 850 \ 900 \ 1800 \ 1900MHz. After connecting the Winknet MF50 3g WiFi router to other devices, their downloading and uploading speeds are tested. It is shown that the device has a downloading speed of 14.4Mbps and an uploading speed of 5.76Mbps.

We have compared all the features of the two router devices, i.e, its design and performance feature. Now it is the time to decide which one is better by considering the overall feature. It is difficult to find out the exact best one from the two, but it is clear that which one suits for which purpose. Now we can conclude that both devices have its own pros and cons, now you are aware about that, so it is your turn to decide the best one.