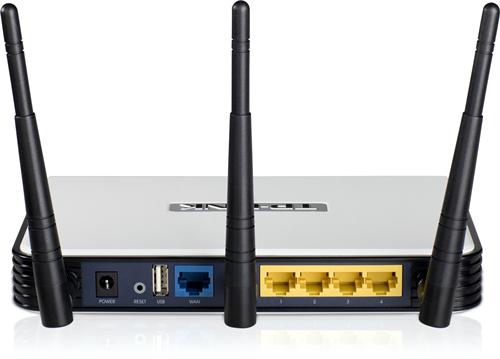 There is nothing much specific to point out the design of TP-Link TL-WR1043ND. It looks much similar to what a normal WiFi Routers do look, but with three antennas. The antennas of this device are of detachable size, so that you can remove any of them according to your comfort. The device is a single banded 2.4GHz that holds a dimension of 7.9 in X 5.5 in X1.1 in. TP-Link TL-WR1043ND holds a multi-functional USB port at its back, that can allow you to connect some storage devices and share it over the network, along with that of USB port there is one WAN port that allows you to access broadband connection via DSL/Ethernet cable. The device also holds a reset button and a power port next to that of USB and WAN ports. It is also being packed up with four Gigabit Ethernet ports, which makes TP-Link TL-WR1043ND capable for providing high data transfer between several computers that are directly connected to this router.

On the front section of this router, it delivers a series of LED lights that notify the status of Power, WLAN, Gigabit, QSS, USB etc. Next to that of the LEDs, the device provides a QSS(Quick Security Setup) button that helps you to enable/disable the QSS mode. 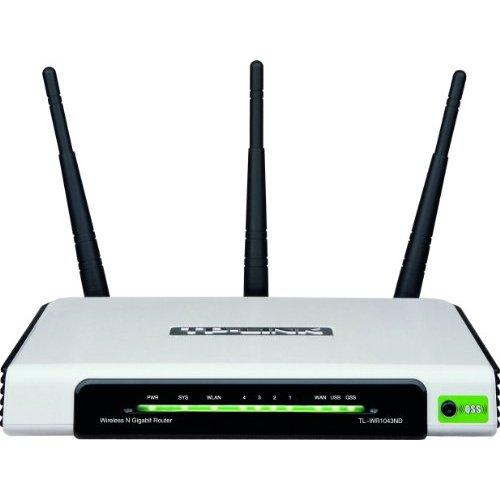 TP-Link TL-WR1043ND is a cheaper but efficient WiFi router that can deliver you an internet access with much better speed than any of the normal Routers do. TP-Link TL-WR1043ND is a single band Wireless N Gigabit router with an interesting thing that it features three antennas over its back with the latest SST technology. The SST (Signal Sustain Technology) introduced in this device enables higher signal strength. Well, the device isn't compatible for providing you the best frequency band, but it is pretty sure that the device will definitely show its signal strength much more than a 2.4GHz banded Router delivers. Also the device delivers you a data speed up to 300Mbps which is most common for latest WiFi Routers. Like every other normal WiFi routers, TP-Link TL-WR1043ND is also running HTTP as its Remote Management Protocol.

The Gigabit ports that the device hold at its back are much helpful in processing huge data transfer that can be handled very smoothly. Compared to other 11g products, TP-Link TL-WR1043ND is capable of providing high speed and most stable network access with its IEEE 802.11n standard. The device also comes out of the box with an ability to offer Parent controls and also delivers bandwidth control.

Setting Up: How to Setup TP-Link TL-WR1043ND

The start up instructions of TP-Link TL-WR1043ND can be found on the CD guide which is also included within the package, even a novice user can setup this device just by doing as instructed. There is no other complicated process in it, as the device connects to the internet and provides internet access to the shared devices, as soon as the device is being setup. Unlike other WiFi Routers which take minutes to boot,TP-Link TL-WR1043ND boots quite fast and the set up is done only in a couple of seconds. The on-board software which comes along with this device is also pretty easy to use. The user will not find any complications adjusting the router settings, as they are just included within the multiple tabs named as 'Setup' or 'Advanced'. Advanced setting such as QOS, MAC address binding, parental control, Wireless network security including WPA2, etc are also listed on the above settings menu.

TP-Link TL-WR1043ND is one among the best router for sharing your Primary network access with multiple WiFi enabled device wirelessly. This device performs better than what the similar ranged WiFi Routers do. Price of this device is another interesting thing. The TP-Link TL-WR1043ND comes with a price tag of $55 which is about Rs. 4500 in the Indian Market with a warranty period of 5 years. This device can offer you the best that you are looking for, but still this device is not the one if you are looking for a high-ended WiFi routers which provides high bandwidth of frequency. If you can slightly raise your budget, then ASUS RT-N16 will your better choice, which offers you much more than what TP-Link TL-WR1043ND delivers.

Best 3G Wi-Fi routers in India with price, availability and warranty on them

Today internet usage is a important part of life. It is necessary to connect all electronic devices through internet according to need so for this situation 3G Wi-Fi routers are best way. I am posting best 3G WiFi routers in India.

3G Wi-Fi routers are now popular in India with the introduction of 3G networks. But in order to use 3G internet connectivity in your portable devices like tablets and laptops you need a 3G Wi-Fi router. It also acts as hotspot to share connection with multiple users and helps to extent the signal coverage. In this article you can read the features, price and specs of budget 3G Wi-Fi routers available in India within the price range of Rs.3000

This article is a summary of some of the best and most economical wireless routers and their featuers and reviews. It will also update you with their price and availability in India.

Today in this article I am going to review D-Link DIR-505, which is an all-in-one mobile companion. This device offers a lot more interesting things for you. Continue to read my article and find out the specifications, features and price of D-Link DIR-505 in India.