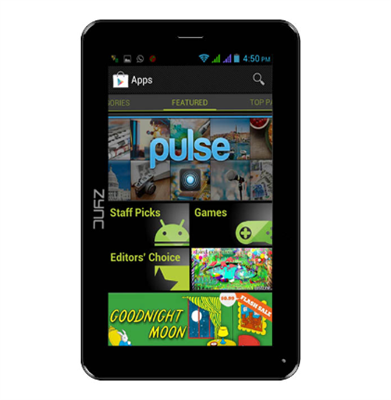 The growing popularity of tablet computers has made tech firms to deepen their research and invest more money to manufacture devices which comes under less price tag. To cater the need of tablet enthusiasts, Indian technology company Zync has unveiled yet another Tablet PC in the Indian tablet market. Dubbed as Zync Z99 2G, the tablet supports voice calling feature. This device will enable users to make calls, check e-mails and surf the internet while on the move.

The voice calling facility added in the tablet will enable customers to go behind the device which thereby avoid the necessity of having a smartphone. The Zync Z99 2G would give a direct competition to Pantel Penta T-Pad WS802 C- 2G tablet which was launched recently. The last product from the company was Z1000, a 9.7 inch tablet which comes along with a SIM card slot making voice calling possible.


The Zync Z99 2G tablet spots a 7 inch TFT LCD 5 point multi-touch capacitive touchscreen display with 800 x 480 pixel resolution. Powered by a 1.2GHz processor, the Z99 2G runs Android 4.0 Ice Cream Sandwich OS. Regarding storage, the tablet offers 512MB RAM, 4GB internal memory which can be expanded up to 32GB with the help of a micro SD card. Regarding the camera optics, the Z99 2G is equipped with a dual 0.3MP front and rear camera.

The Zync tablet will have a direct competition with Penta T-Pad WS802C-2G. The major highlight of Penta tablet is its 8 inch display, 8 GB internal memory, Andorid 4.0 ICS OS and 5,000 mAh battery etc. The tablet also offers 2G support, BSNL SIM card with 4GB data free for 2 months. Considering the price, the Zync Z99 2G comes along priced at Rs 6,990 while the Penta tab will be available at Rs 8,299.

The Zync Z99 2G tablet which comes with one year warranty is packed with a pair of earphone, sleeve pouch, screen guard, USB cable and a charger. According to the information available in the website, the Z99 2G is expected to start shipping on 11th December and will be dispatched within 3 working days after the payment is made online. Customers can track details from the email send after the product gets dispatched. Interested customers can purchase Zync Z99 2G tablet online from its official website.

1. DO not show memory (Show short memory).
2. Hanging problem.
I submitted on 3/4/2013 but not received back till dated
.Please solve the problems as early as possible
I feeling so uneasy
Please soon