I had always preferred to use Wifi connection as I use laptop and not a desktop. And after getting Android phones I started relying more on Wifi while at home and only when I went out I used 3G and that too quite sparingly as the cost of 3G is too high. And when I came to know that there are pocket wireless devices avaiable in the market, I started to enquire about it. But to my vain I could not fine one such in the market. But did find one in online shop. That device is Micromax 400R 3G pocket wireless device. It could be called mifi in short of mobie wireless. It is an unlocked operator free device in which any 3G Data sim or 3G enabled sim of any operator can be used. It is also Os independent and it is very easy to get the device connected to other wireless enabled devices.

Inside the box
The box contained the device with a battery and charger (micro USB pin wire which had a USB pin in the other end) and a wall socket charger with USB pin connector. One have the choice of getting either the black one or the white one. The micro USB can be used for connecting to LAN, to charge and also to Debug. The box also had a quick start guide.

The top of the device have a white or black panel with a silver lining and the name Micromax written on it The top of the device have LED indicators for Wifi connectivity, on/off, Tower or Connection indicator and connectivity. The micro USB point which is used for charging is on the horizontal side that is close to the lettering Micromax. The right side of the device (from the USB point) have the on/off button, WLAN/WPS connectivity button and the Reset button. Just behind the battery slot is the embeded USIM/SIM card slot and the Micro SD card slot which can hold upto 16GB and it can also be used as pen drive. It is not built cheap or look cheap inspite of the body being plastic. It is just 60g in weight and is light. It can be carried in one's pocket very easily. 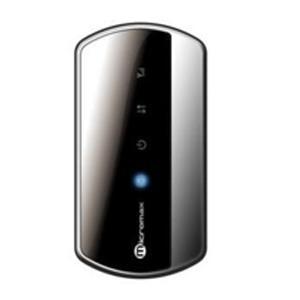 Connectivity
The two laptops, and 3 Android phones are connected to this device while at home. And as it is a mobile router, I take it wherever I go and so my Android phone is connected to it and so for almost 5 hours I get connected to Wifi even while on the move. This is a mobile Wifi device that didnot get disconnected even when travelling across the different networks. If the sim is enabled with roaming, it can be taken even across states.

The broadcast distance is about 10 mtrs but if there are a lot of walls in between (that is if the device is in one corner of the house my android phone didnot pick up the Wifi signal that easily). The specifications claims a battery working time of 5 to 5.5 hours. But that happens only when one device is connected to Wifi. When there are more 3 devices connected the battery drains faster and losts only for 2.5 hours.

After inserting the 3G sim it got connected with the laptop easily and I was able to create a new ID and password by using the default password given. I was also able to create separate passwords for Wifi connection. After the passwords were set in the dashboard, I was able to see the signal strength, whether it is connected or not, number of Wifi users, battery power, sent and received MB and whether the sim is in roaming or not.

A few drawbacks I face:
The body of the device is plastic and one can feel the heat of the battery both while charging it and also when it works for a long time. And when it happens, the signal gets weak and inspite of the devices show that you are connected to Wifi there is no actual connection and I was forced to restart the Wifi router. At times, I need to open the back side of the device and let the battery cool down too before starting it again. (Need to check whether any other battery which does not heat up so fast fits in for this).

Over all one can say that this is a unique device that will def replace the data card when one needs to connect more than one device at a time on the move.

Today in this article I'm going to share you some of the features and price review of the newly arrived portable 3G Wi-Fi router Micromax MMX 400R. By refering this article you come to know more about how to buy online and so on.

Here I'm going to compare the two well known and featured 3G WiFi routers, Micromax MMX 400R 3G WiFi router and Winknet MF50 3G Pocket Wi-Fi Router. Read the article and know their pros and cons. this will also help you to know which one is the best one.

Are you looking for India's best 3G Wi-Fi portable router in India? Then you are in the correct place. Read to know more about Micromax 400R 3G Wi-Fi Router reviews and its performance comparison among other routers in India. Also get to know about the pros and cons of the Micromax 400R 3G router and its price and ratings as per the performance in its use.

Today in this article I am going to guide you in choosing the best 3G Wi-Fi routers. Some of the best Portable 3G WiFi Routers are listed below. Read through each one of them and find out the best one that gives you ultimate satisfaction.

LAVA W150 is a portable WiFi router which can be used to extend the WiFi range of your internet connection. You can read about the features and the price of this device in India from this article.

the device is good ..but could u help me to set password in The new Micromax MMX 400R 3G pocket wireless router

By mistake i have clicked on Reset button on the router. Now its not turning on.
What to do..:(

@saloni, try to uninstall the previous installation and wait for it to complete. Then try someother usb port and try to switch on the router. Once you get the autorun option, start with fresh installation.
I think this will help. Ping me if you need anything.

MMX400R is not supporting where 2G only working country like BANGLADESH

I bought one. It worked fine. All of a sudden it stopped working. I went to a Micromax authorized service center in Chennai. They couldn't rectify it. So, they provided me with a replacement. With the replaced router, I am experiencing the greatest and the only usability issue - every single time when we try to connect per day, from any single device, it will land us in a default "ads.html", which will provide 2 options - 1. Connect to Micromax app store, 2. Do not show again link. The second option has to be clicked every time. For a fully paid router, we have to click on an ad every time! This is technically called "adware"! This is annoying...

I have a MMX 400r router. I have forgotten the password. Even after physical reset, I get connected to the browser asking for the ID and password, which I do not remember. What to do?

I have tried to reset my Micromax modem password by connecting again. I have changed my password and I tried 'password' but not working. Please advise me.

I have reset my pocket router mmx400r, but it was not powering on. In charging time it is only blinking fast in green light and without charging time it was giving no response. Please help me how to power on. Thank you so much.

I cannot find battery even at the service centre.