In this modern age of technology, everyone wants a mobile phone which has amazing features and specification with in affordable price. So to complete this wish of the customers, Sony is coming with the new Android smartphone Sony Xperia E. After the separation of Sony from Ericsson, Sony start launching the Xperia Series which is running successfully in the market. The design and the performance of this series is really very good. As we know about the colored line of Xperia models which will change it's color according to the theme. This belt type line was the plus point for the design of Xperia Series. 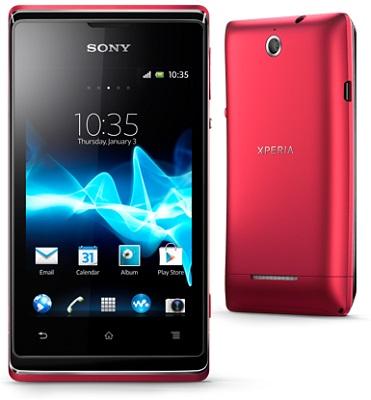 Now Sony is coming with the brand new Android smartphone, Sony Xperia E which has the latest operating system Android 4.1 Jelly Bean. Jelly Bean operating system is really a good user interface and facilities. The news is also coming that this Android smartphone has low price according to the specifications. This Sony Xperia E is going to be the cheap mobile phone which will be powered by the Jelly Bean OS and it will be available in the stores in the spring of 2013. There are also many competitor of this mobile phone like Samsung Galaxy Axiom and Apple is going to launch its first low cost mobile phone.

Sony Xperia E, the economic Android smartphone with a good brand name has interesting features. It has Android 4.1 Jelly Bean OS. It is also powered by the 1 GHz Cortex-A5 processor with HTML 5 browser facility. Xperia E supports MP3 palyer formats like MP3/eAAC+/WMA/WAV player and video player formats like MP4/H.263/H.264/WMV player. It has the FM radio facility with RDS. Sony Xperia E is a smartphone which has the 3.5 inch display with 320 x 480 pixels resolution and dimensions are 113.5 x 61.8 x 11 mm with 116 grams of weight. This also has the capacitive touchscreen display with multi touch facility.

Xperia E is available with the 3.15 MP camera with 2048 x 1536 pixels. It has the 4 GB internal memory space from which 2GB is for user available and it is expandable up to 32 GB via microSD card. It has 512 MB RAM and for connectivity options it has EDGE, GPRS, WLAN, Bluetooth v2.1, micro USB 2.0. This Android smartphone has the 1,530 mAh battery which has the 530 hours stand up time and 6 hours talking time.

This smartphone has the features like you will feel the real HD voice clarity. This mobile phone will be available in black, white and pink colors. This mobile phone is coming with two variants one is single SIM and another is dual SIM. In market there are many costly mobile phones with more features, but it doesn't mean that cheap phone will not suit the mobile phone market. This phone Xperia E is not like the other mobiles like Galaxy Note or iPhone 5 , but it has the amazing features in low cost. So this is the plus point for this Android smartphone.

Have you ever imagined of using Android alongside Windows 8 OS on the same notebook, netbook or tablet. What's more, exciting than having the access on apps and services of Android on one side and the another side you will get the benefits of PC, like Windows 8 Metro styled user interface. Let us see details about the Dual Boot Windows 8 and Android Jelly Bean.

Google’s new upgrade Android 4.1 Jelly bean is an update of the earlier Android version. This is the OS that powers Google Tablets. Its additional enhanced features like Google Now and Voice typing are its main highlights. Let’s explore what this new OS has in store for us.

Code names for Android OS from Google and release history

In this post, I am describing various code names used by Android OS. You can bookmark this page to keep track of the code names for various Android OS releases.