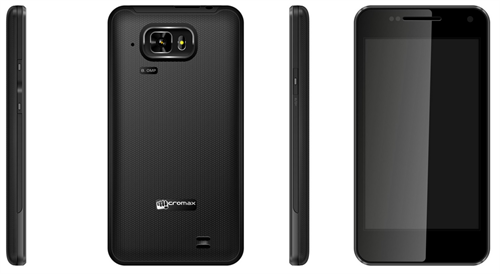 Another amazing thing is that Micromax introducing the new mobile phones with operating system Ice Cream Sandwich or Android 4.0. This is the main point to give plus point to this mobile phone because Jelly bean OS has been used in very few Indian manufactured device till now. Micromax A90 is a mobile phone which is made for the people who want to buy a smartphone with exciting features but there budget is not much. So there is an opportunity for those guys to buy a smartphone which is providing by Micromax in just Rs. 12,990.

The Micromax A90 Android Smartphone is a dual SIM mobile phone which has the design like Samsung Galaxy S2. As everybody wants a sleek and thin mobile phone, because to hold such phones is easy. This time Micromax comes with a mobile phone which is having design and performance too. The UI of this Android Smartphone is also good. On the back of the mobile there is a textured panel which will protect it from surface rubbing and also prevent from slipping out from hands.

Micromax A90 is a mobile phone which is available with the dual SIM facility of Mini SIM. It has the operating system Android 4.0 Ice Cream Sandwich with 1 GHz processor. This smartphone is available in Black color. In multimedia, this Android smartphone supports MP3/AAC/WMA/WAV player and in video MP4/WMV/H.264/H.263 player. On the other hand it is available with the facilities like Google Search, Maps, Gmail, Youtube, Calendar, Google Talk and HTML 5 browser.

Micromax A90 Android Smartphone has the dimensions of 125 x 65 x 10.6 mm and the weight is 95 grams. It is powered by the 4.3 inch display which has 480 x 800 pixel resolution. It has the AMOLED display with capacitive touch screen which is rich in colors. This device has 4 GB internal memory in which 2 GB is user available and external memory can be expandable up to 32 GB via microSD card. Micromax is giving the 512 MB RAM. In connectivity there are options like GPRS, EDGE, WLAN, Bluetooth v2.1 with A2DP and microUSB v2.0. This smartphone is having the 8MP camera with LED flash which is same as the Samsung Galaxy S3 and Samsung Galaxy Note 2. Camera is available with the features like Geo-tagging, auto-focus and digital zoom. Battery of this mobile can affect the positive image of this device. Micromax A90 has 1,600 mAh battery which has the stand by time of 174 hours and talk time of 5 hours.

Micromax A90 is an Android device which is having the good hardware and design in just Rs. 12,990. This mobile phone is the best choice for the people who want a low budget smartphone with interesting features. There are lots of points like OS, processor, camera, display and handling which are in the favour of this mobile phone. On the other side battery life can be the problem for this Micromax A90 Android smartphone.

Micromax A90 smart phone is well designed phone. It achieves millions of users in few month. I am using this phone from last 2 month back. I never see before this functionality in others smart phone. I am really enjoying with my phone.