Belkin India, the pioneer in computing and consumer electronic device announced the launch of Belkin AC1200 Dual Band Wi- Fi router in India. This next generation router is equipped with the latest features like 802.11 A.C technology. The USP of this router is it provides speed upto 3 faster than existing technology. Here's a quick snapshot on the design and the features of the product 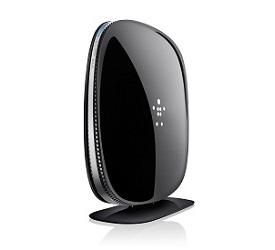 The Belkin AC 1200 DB Wi-Fi Dual Band router looks similar to Belkin Advance N900DB or Belkin N750DB. It has a sleek design and a UFO shaped chassis with hidden antenna design. The router is designed to work vertically on a small base and one can topple it relatively easy since its base is narrow and the package is light. The router offers a variety of options in terms of placement.

On the back the router has a four gigabit LAN ports for wired clients and one WAN port to provide connectivity to the internet source like cable modem. There are two USB 2.0 ports, and similar to other Belkin routers they take a long time to recognize the hard drive or printer.

The 1200 DB Belkin router comes configured with two wireless networks, one network on each band with names and encryption keys pointed on the bottom of the base and the label is attached to
the router. The label has information for guest network of router and the information is varied for each unit. It is the default value that you set for the router. To make the initial configuration easy the router is equipped with CAT5e cable that is plugged into the WAN port.

Belkin AC1200DB router has a CD that contains Belkin Router Monitor. Once it is installed, the software provides guidance, including the basics like hooking router to the power source and devices.
For advanced settings, an individual can change the name of wireless and this software launches the router's web interface and it navigates directly to a particular section. You can even skip this software and go directly to router's interface by pointing to a particular web browser from the connected computer to the router's default IP address. This interface also helps you to manage other features.

The Belkin router is priced at Rs 14,999 and it is available in major consumer electronics store.

The Belkin AC1200DB router supports the dual stream set up of both 802.11n and 802.11ac Wi-Fi standards. Also, it scores well in terms of performance.