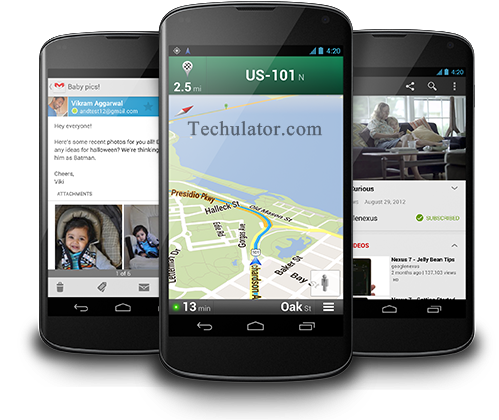 Introduction of Google's Nexus series was their intention to spread their Android OS in the smartphone market. They have tied up with HTC and Samsung to release three Nexus smartphones and it is the first time Google collaborate with LG. Until now it is a successful series and for that reason, people were eagerly waiting for the release of Nexus 4 in India. There is another big reason for the impatience of the people around the world, especially Android lovers! All the latest versions of Android OS is introduced in a Nexus series phone and Google does not make difference this time too. Hot new Android 4.2.1 Jelly Bean will be introduced here in this Google-LG Nexus 4. Rather than the benefits from selling the phones in the global smartphone market, Google is looking for the circulation and branding of Android and therefore we can see that Nexus phones are always affordable. And finally it is available in India and is in a rush!

Through this pre-order option, you can buy online Google LG Nexus 4 now from Rediff online shopping website. This is Nexus 4 8GB version and it is first listed at eBay with a huge price of above Rs.35,000. But now the prices are slashed but no discounts or offers are available now and you have to pay Rs.26,490 and additional Rs.99 for shipping.

Google Nexus 4 is equipped with lots of impressive features such as wireless charging capability, 4.7 inches True HD Plus capacitive touchscreen, 8 mega pixel camera with Auto Focus and LED Flash etc. A 1.3MP secondary camera is included for video calling purpose. The machine is packed with a powerful quad-core Krait processor that is powered by a QualComm SnapDragon chipset. Introduction of the new app Google Now that gives you the latest alerts on news, flight delays, sports scores etc is another good thing lies in this sleeky style device. This one is coming with two versions, 8GB and 16GB and both will have 2GB RAM along with the stunning processors to give a lightening fast to the device. Important connectivity options include 3G, Wi-Fi, USB, A2DP etc. Battery back up is also good for it as it will give up to 15 hours talk time and 390 hours standby time which are more enough when compared with recent Android phones.

Now we can see whether Jelly Bean will rock with Google LG Nexus 4 smartphone and also keep an eye on the smartphone arena for more releases in this latest Android OS!

Nokia Lumia 920 has just arrived in India and it becomes a rival for many of the smartphones include the Google LG Nexus 4. Here, I have done a detailed comparison between the Lumia 920 and Nexus 4, which will be helpful for you to find the differences. Read more.

The recently launched Google Nexus 4 and Samsung Galaxy S III have amazing features. Read on this article to find out the differences in two gadgets. The article also briefs on the pros & cons you must consider before buying any of these models.

Do you have Nexus 4 and want to update to latest Android 4.2.1 and that too with some extra features like LED notification and CPU overclocking. Try AOKP ROM.

Officially it is still not available in India. Get correct information before you post something.

Yes, but you can pre order now. It is expected to be released in the mid of December.

Yes, Deepak. Rediff is too slow in delivering products.

Thanks a lot for sorting out the mistake. It has been corrected now. :)