The geeks are all excited about the introduction of Windows 8 by Microsoft recently in the market. With the recent launch of Windows 8 in the market, the markets have been flooded with Windows 8 devices that claim to be far better in software than their predecessors.
Windows 8 is the first fully cross platform version of Windows launched by Microsoft that works on every device be it a PC, an ultra-book, a phone or even a tablet. Windows 8 is considered the best Windows as far as multiple platform functionality, multiple display support, touch optimization and User Interface is concerned.
Most of the people thinking of buying a new tablet would definitely want to go for a Windows 8 tablet for sure. But the prices of the new Windows 8 tablets are just too high and impractical. In this post the cheapest Windows 8 tablet that is Acer Iconia W510 and its technical specifications have been discussed that would definitely help you in taking the final decision. 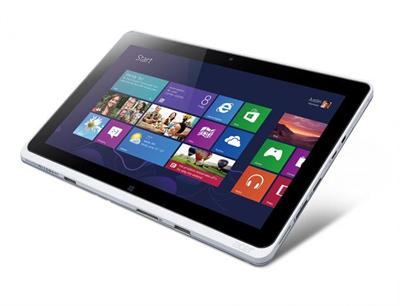 Acer Iconia W510 is one of the most efficient hybrid laptop/tablet devices. Though it is not the most high end computing device based on Windows 8 but is still doable considering its price of $ 500 for the basic model. So here we go on the specifications:

Like an ideal netbook, the Acer Iconia W510 is packed with an Intel Atom core processor that has been clocked at 1.8 GHz and has a clover tail series dual-core Z2760 CPU. It also comes with an ample 2 GB of RAM and a storage space of 32 GB with the cheapest version that costs as low as $ 500 without the dock, with every other alternative of the device, you will be provided with a 64 GB of SSD space.
With the latest advancements, the Atom Processor performs really well thanks to the Clover Tail series. It promises you a 10 hours of non-stop use and a stand by time of about 3 weeks.
You can say that the tablet does every possible thing that a tablet is supposed to do. It is obvious that you cannot derive the utility of an ultra-book from this tablet due to the Intel Atom processor but if you evaluate is as a tablet, the Acer Iconia W510 will certainly shine.
The touch screen is quite responsive and there will not be any noticeable lags when you launch the apps or swipe across the screen to reveal the Windows 8 charm bar.
Compared to other tablets, the Acer Iconia W510 definitely steals the show when it comes to performance. Obviously there is no point in comparing the device with a netbook just because it comes with a detachable keyboard dock.

It has almost been a year since Acer announced that it will no longer manufacture 'unprofitable and cheap products', yet the Acer Iconia W510 does not feel like a premium device. The problem is with the keyboard dock. It feels too plastic like and the keys are just not right. Though the deck is more of metallic material, the dock just does not match it at all. The hinge connecting the dock is also made to be white and plastic that does not match with the entire system.
As far as build is concerned, the screen of the tablet when paired with the keyboard dock tend to wobble a bit that would really bug those who work in a jostling environment such as buses, trains etc.
Though the keyboard really sticks to the screen properly so that you have no worries of making it fall down even if you lift the device from its screen while the flap is open. This is quite a good point for Iconia W510. The hinge also feels really sturdy which award it one more plus point.
In all the tablet is pretty good when it is actually used as a tablet that is, without the keyboard dock. The double tone with white body and black bezels, definitely give it chic looks. The only thing that ruins the beauty is the word ACER and ICONIA etched onto the plastic on opposite sides of the tablet.
Well, thanks to the plastics that the tab weighs only 1.27 pounds which is quite unexpected. Even when you put the dock on, it still weighs only 2.63 pounds.
The 10.1 inches screen is quite wide, so much that you might find trouble typing using the on screen keyboard if you do not have pretty long fingers. But this is a good size when you are streaming media on your tab. The weight of the tablet has been balanced so that you do no always have to keep it from tilting backwards.

Though the build quality of the tablet was quite a turn off, the display promises to refresh you up. The tablet has a Gorilla Glass display that supports a maximum pixel resolution of 1366 X 768. It has an IPS display that offers you with really wider viewing angles. You need not fiddle with the screen orientation while working when you change your position. Also when you are watching a movie, you need not tilt the screen even once even if you have a springy posture.
There is also one more plus point, as you keep on increasing the brightness of the display, the viewing angles would further be improved. Also with the rugged battery, you need not worry using up all its juice and running around every now and then connecting your device to the charger.
The audio quality on the other hand is not of top notch. It sounds a bit tinny while playing certain songs sometimes. But the audio quality is not that bad too. It would be safe to say that the audio quality is pretty much average with the Acer Iconia W510.

Due to the 10.2 inches display instead of an 11 inches display, the Acer Iconia W510 lacks a bit of real estate that compelled the manufactures to condense the keyboard for the device. In order to fit each and everything into the limited space, Acer had to shrink some buttons such as arrow buttons and the tab keys. However it is commendable how Acer has completely utilized this limited space intelligently. The keys have been packed till the edge of the chassis. Also your fingers will not find it difficult to locate the keys while typing swiftly. The only glitch was that often when your thumbs try to hit space bar, instead they tend to hit the track pad.
The track pad is itself quite disappointing as it does not support the much talked about Windows 8 gestures and also the basic gestures such as pinch to zoom and multiple finger scrolling. Hope that the final finished product is free from such glitches.

The tablet houses an 8 MP rear camera and a 2 MP front facing camera for video chats and conferences. The rear camera performs well in good lighting conditions, though while using the Windows 8 camera app, it is required that you hold the tablet still for a few seconds after clicking the shoot button for the shutter to open and close. The good thing is that you may tap anywhere on the camera screen to capture the shot. There is no dedicated shutter button. Although there is no tap to focus button, but the camera is quite intelligent to automatically focus the most desired past of the image that you would have generally wanted to focus on.
As far as video recording is concerned, it supports full HD 1080p recording. Though in between the recording, the lens seemed to go out of focus several times as if it got confused so as to decide which part of the scene it is supposed to focus on.
Although the low lit shots appeared to be a bit dull but still there were no traces of noise in the shot.

If you would take a tour around the tablet's body, you will find all the ports that you can expect in a tablet or a mobile device. There is a power button, headphone jack and the screen orientation lock button at the top edge of the device. Whereas at the bottom there are ports that would be used to lock onto the keyboard dock to the device. If you take a look at the right landscape edge, you would find a micro USB port, a micro SD card slot, a volume rocker and a micro HDMI port to output the HD content to your HDTV.
There are dual speakers on the either landscape side of the device for good audio playback quality. Unfortunately, you tend to block them while you are streaming media holding the tab in your hands.
The keyboard dock will provide you with a full USB port and an extended battery life to additional 9 hours that will definitely enhance the runtime of your device. The only disappointment is that the dock does not provide you with an SD card reader. The dock houses a charging slot that utilizes the same adapter as you use to charge the tablet itself.
You also have the option to buy further additional accessories to connect to your tablet such as a faux suede case, a micro HDMI to VGA converter adapter etc.

Well, there is nothing left for you to expect more form a tablet that costs only $ 500 and has a Clover Tail Intel Atom processor with a full version of Windows 8. The screen is amazing and responsive and the nine hour battery life without the dock seems to be pretty promising which would even amaze you if you go for a higher version of the device that comes with a dock and further enhance this already long lasting battery life when you put the dock on.
Acer has tried to be considered as a serious OEM in the tech markets with this new tab but the consumers will still stick to the pre-conceived notion of the brand because of the not up to the mark built of the device. Acer certainly needs to work on the build quality of its devices for the users to take it as a royal brand. The netbook style plastic keyboard dock could definitely have been much better but is still doable considering the price of the device.
The IPS display with a good resolution and a full HD capable 8 MP camera definitely provides this tablet an edge over the other tabs which are although costlier but do not provide these features. If the additional accessories were also included in the package, there would have been nothing to stop this table to be sold like hot cakes.
Nevertheless, the $ 500 deal for the fully featured Acer Iconia W520 is not definitely worth missing. If all the glitches are taken care of at the time of its final launch, this just might become the cheapest tablet of the year 2012 that is based on Windows 8 platform and has a good blend of really amazing software and rugged hardware. You may definitely consider this as a viable option if you are thinking of purchasing a new Windows 8 based tablet soon.