Microsoft launched its new flagship operating system in three editions: Windows 8, Windows 8 Pro and Windows RT. The Windows RT devices are energized with ARM processors and are less expensive when compared to Win 8 and Pro devices that are powered up by Intel chips. But notably, Windows RT computing products have accessibility to modern UI/Windows 8-style applications only.

After my earlier three post on the series of cheapest Windows 8 laptops here I am going to start another series of Windows RT convertible tablet/laptops. This is the first part of this series wherein I am going to describe specs and prices for RT transforming devices from Asus, Dell and Microsoft. All specified devices are already available to purchase in online.

My first pick is the Tablet 600 from Asus which is now renamed as Asus Vivo Tab RT with 10.1-inches of SuperIPS display and dual cameras. For now, this device is available to purchase in Japan only.

The second RT device is sleek shaped 10-inches XPS 10 from Dell which is an affordable machine with 20 hours of long battery backup when docked with keyboard. This device is also available to purchase online through major retailers of Dell.

My third and last pick is Surface RT from Microsoft with 10.6-inch multi-touch HD display, ARM-based NVIDIA Tegra 3 processor and dual cameras. This is also an affordable offer from Microsoft and available to purchase online. 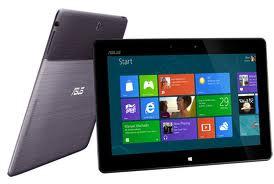 Vivo Tab RT is the reformed version of tablet 600 from Asus and designed for pitching more at users' mobile needs. This is the hybrid RT companion of Asus Vivo Tab and also measuring 8.3mm thick but its lighter (1.1 pounds) than Vivo Tab. The Vivo RT features 10.1-inches of SuperIPS and multi-touch screen display with standard screen resolution of 1, 366 x 768 pixels. It boasts of dual cameras – first 8 MP rear-end with autofocus + LED flash and second 2MP webcam on front-facing with support for SonicMaster power audio as well as onboard NFC sensor.

Running on Windows RT, the device has access to new Metro as well as user touch interface apps but the traditional desktop applications are not allowed for access on RT devices. It is powered up by quad-core Tegra 3 ARM processor plus 12-core GPU just like Transformer Eee Pad and also coupled to 2GB RAM along with 32GB of internal storage. The Tegra 3 CPU also supports Microsoft's connected standby mode with Windows RT to let users easily check news headlines, read emails as well as view calendar entries with low impact on battery life of device. 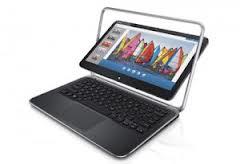 Just after unveiling their XPS Duo 12 and XPS One 27 Windows 8 laptops, Dell extended its Windows RT line up also with announcing XPS 10 convertible tablet. The device is less than 10mm in thickness and catering to your daily computing requirements. The lightweight machine with keyboard dock is an ultraportable model with revolutionary convertible ability from tablet to full-fledge notebook PC.

The XPS 10 features 10-inch touch screen with bright display and a rear end camera. It is powered up by a Qualcomm's Snapdragon S4 ARM processor clocking at 1.5GHz. This is a Windows RT based convertible device with a keyboard dock that comes packed with an inbuilt small battery too that helps improving up system's battery backup. It claims boosting device battery backup up to 20 hours, just double to without docking.


Dell started taking pre-orders for XPS 10 tablet at the starting price of $499 with configuration of 1.5GHz dual-core Snapdragon chip, 32GB internal storage excluding keyboard dock and it will be priced at $679 including a keyboard. This machine is expected to come in customer's hand in second half of December, this year. 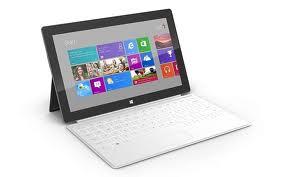 Microsoft unveiled its two Surface versions – first with Windows 8 Pro and second with RT. The Surface RT tablet is designed for competing with tablets running mobile OS like Android and IOS (iPad). The device will be available to customers in variety of colors and with fully-touch optimized version of Office 2013 (includes Word, Power Point and Excel etc. as usual). It has a built-in kickstand, vapor-deposited magnesium case (PVD) and Stereo speakers with 3.5mm headphone jack. Packed with dual camera the device comes with a pen and palm block.

It features 10.6-inch HD display with screen resolution of 1, 280 x 720 pixels and 16:9 aspect ratio and five-touch covers. The light weight 1.51 lbs (767g) and just 9.3mm sleek shaped device is easy to carry anywhere with a traditional typing keyboard. The device is powered up by an ARM-based NVIDIA Tegra 3 chip that no doubt, requires less power to operate compared to an Intel chip. It also comes packed with up to 64GB built in storage with a microSD card reader and multiple connectivity ports including USB 2.0 port, Mini-HDMI port and also 2x2 (MIMO) Multiple Input Multiple Out antennae for Wi-Fi connectivity.

To know more about affordable priced Windows 8 and RT laptops, please visit my next two posts - Windows 8 laptops from HP Part-1 and Best Windows RT Convertible Tablet/ laptops Part-2. Both are based on low priced Win 8 laptops already available in market to purchase.

Check out the best and the most unbiased Notion Ink Cain 8 Tablet review with its price and specifications. You can find a detailed review covering every pros and cons.

Device convertibility is one of the revolutionary technologies that are in great demand, nowadays. This post covers specs and prices for some of such revolutionary convertible Tablet/ laptops arrived or arriving in market very shortly.