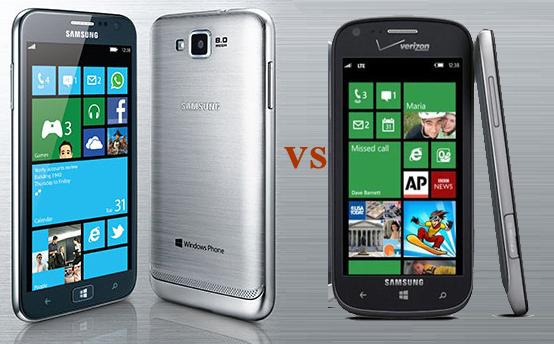 Samsung ATIV S is the first Windows-8 smartphone that was officially announced in August, 2012. It has more features compared to Windows smartphones. It is about 137.2 mm tall, 70.5 mm wided and 8.7 mm thick and weighs about 135 grams with light sensor facility. Samsung ATIV-S has the resolutions of 720 pixels width and 1280 pixels height, 4.8 inches screen with 306 ppi pixels density. Super AMOLED capacitive touchscreen is used as touch screen with 16 million colors and multi-touch facilities are also available.It has also got Corning Gorilla Glass 2 to protect the screen from rough use and scratches.

Samsung ATIV-S is available in two versions. One version has the internal memory of 16 GB and the other has 32 GB. Internal memory is the important thing in smartphones because it gives us a huge storage capacity to install and store as many applications as we want . If we install applications to our external memory, it will take some time to load even if RAM or processor is better.It also has 1 GB RAM with external memory support up to 32 GB. This smartphone has a huge storage capacity for storing the huge data. It supports data network facilities like 2G and 3G. The disappointing feature of this smartphone is that it has no 4G facility which is present in many high end smartphones these days. It has also got WLAN, Bluetooth, and NFC facility with Micro-USB support.

Samsung ATIV-S has 8 Mega pixel primary camera on the rear side and 1.9 Mega pixel secondary camera on the front side with autofocus, image stabilization and LED flash facility. It has 1080@30fps video recording and video calling facilities through secondary camera. It runs on Microsoft Windows Phone-8 operating system and powered by Qualcomm MSM8960 Snapdragon chipset and Dual-core Krait 1.5 GHZ processor. It has an extra Adreno 225 GPU for graphics support and games. It has got the Sensors like Accelerometer, gyro, proximity and compass. HTML5 web browser and GPS facilities are also available in this smartphone. One of the disappointing features is that it has no Java and Radio support.

There is not much difference in these smartphones. Samsung ATIV Odyssey is CDMA phone while Samsung ATIV-S is GSM device.

Are you thinking of buying a new sliding tablet from Samsung? Samsung has recently announced that it will launch Samsung ATIV Q tablet next month. Read this article for our detailed review of the tablet. Read it and know the features, specifications and price of Samsung ATIV Q smartphone in India.

Are you looking for the detailed review and specifications of latest Samsung ATIV Q? Then you are in right place. ATIV Q is latest convertible device from Samsung with a lot of features like Dual OS or Dual boot, running both Android and Windows 8. Read more on this article to know more about the device and also see the price and release date of this Ultrabook from Samsung.

HTC Accord And Samsung ATIV S : A Comparison

Samsung launches ATIV S which is not a shocker in itself but why did it sneak in and launch just days before Nokia was scheduled to launch it's phones? Is Samsung worried about losing out after having lost a legal battle with Apple? Is the company sinking?