Apple is known for its wide range of user friendly iPads, now Apple has launched a pocket-friendly iPad mini around 7-inch. Google has already introduced such a pocket-friendly tablet named as Google Nexus 7. Apple has recently announced that it had sold more than 100 million iPads and now this iPad mini is the new one of this kind. The price of iPad mini is high but the product worth it. 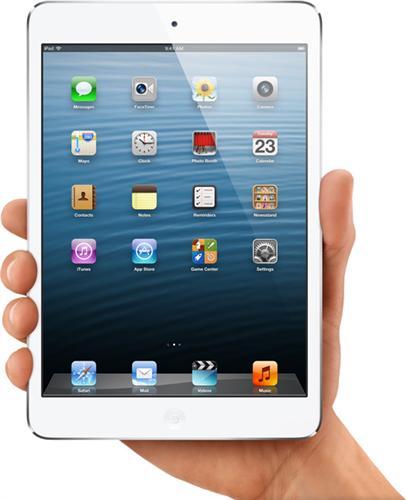 • The iPad mini comes with 7-inch screen and 1024×768 screen resolution.
• It has Apple's dual-core A5 processor.
• The battery life is 10-hour with trans-Atlantic flight.
• Apple doesnot include USB or memory card slots for external memory interface.
• iPad Mini is mere 7.2mm thick and its weight is 312g.
• iPad mini supports browsing the Web, reading e-mails or e-books, or watching video while travelling.
• It has ultra slim 30-pin connector.
• Dual-band (2.4GHz and 5GHz) 802.11n Wi‑Fi and support for channel bonding is available.
• Net accessibility is also high with downloading speed around 150 mbps.
• It can make ultrafast cellular network connections with advanced wireless networks such as HSPA, HSPA+, and DC-HSDPA.

Apple's iCloud service is enabled, which makes smooth, automatic synchronization of e-mails, calendars and other information. This iCloud facility is much more easier and faster compared to the MAC OS features. The iOS version of Microsoft Office is not available instead QuickOffice and Apple's own iWork suite is available which edits MS Office documents.

iPad Mini's 7.9-inch screen enables it to work with all its applications without strain. The iPad Mini uses iOS 6―the latest version of Apple's mobile operating system The App Store has over 275,000 iPad apps so this feature enables it to download all applications. The Apple iPad mini has lot of built-in apps like gaming features, it helps users to play games with real time environment, video can be played with HD 1080p definitions. The iPad mini has A5 chip which makes it faster and power-efficient. As it is power-efficient battery lasts up to 10 hours on a single charge. It has 5 MP camera, so it can take snaps with good clarity. All the great stuff such as music, photos, and videos — can stream wirelessly to your HDTV and speakers via Apple TV. iPad mini over Wi‑Fi with AirPrint helps us to take print outs directly. The iPad mini is so thin, hence it is enabled with a ultra-slim 30 pin lightening connector. All gadgets, tablets comes with one year technical and hardware coverage, but Apple iPad mini comes with repair coverage and technical support to two years.

Apple iPad mini ensures users compatibility and portability, specially for usage during business trips and long travels. Android based iPad such as Google Nexus 7 is not so compatible compared to Apple iPad mini. The price of Apple iPad varies with its memory capacity, iPad touch 32GB version priced at Rs 23,900 and the 64GB version at Rs 30,900 in India. The Retina Display capabilities and a few other features makes it much more user-friendly and reliable product.