This article is for those guys who were in a confusion in choosing the best one among Nokia Lumia 810, Nokia Lumia 820 and Nokia Lumia 822. The three handsets are from the Nokia company and they are the different models of series of Nokia Lumia. Here we are providing an awesome comparison between the 3 Windows phones which will help you to take appropriate decision while purchasing one among these. Now let us go through the detailed comparison. 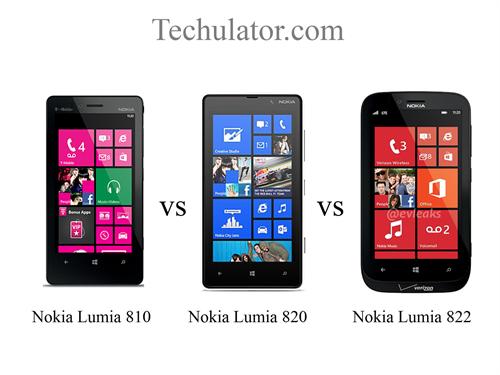 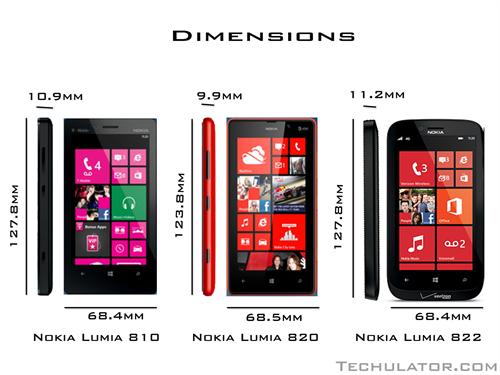 All the three handsets support sound alert system such as Vibration, MP3, WAV ringtone. They have a good quality loud speaker which helps to hear songs, audio loud and clear. They also support 3.5mm jack. There is an inbuilt port for connecting the headphone in it. Dolby Headphone sound enhancement is a new technology used in them to play audio files with Dolby sound effect while connected with headphone.

The three handsets use almost same camera features. They comes with a 8MP rear camera with dual LED flashlight which helps in capturing better quality images. Carl Zeiss optics lens is used in the 3 devices so that it offers better performance in image capturing. We can see that the three mobile phones have additional camera features like Geo tagging, auto focus , touch focus. HD videos of 1080p@30fps quality can be recorded using these handsets. The Nokia Lumia 810 and 822 have a front camera of 1.2MP, mainly used for video calling. Using this front camera videos of 720p@30fps quality can be captured. But Nokia Lumia 820 only has a VGA quality front camera, that is the only difference.

Now it is the time for conclusion. After completing the whole detailed comparison, I think it is too hard to select the best one as overall. All the 3 handsets have its own speciality in its features. Selecting the best one is too hard, rather than it is easy to select the best one on each feature. If you prefer display feature, it is better to choose Nokia Lumia 810 and 822. The processing performance is almost same for the three phones. For better memory performance Nokia Lumia 822 is better. When we compare the battery features of the three devices, it is clear that Nokia Lumia 810 is better for getting better standby, Nokia Lumia 820 gives a good talktime than the other two and Nokia Lumia 822 provides good music playback.

Such a wonderful comparison. My favorite one is the nokia lumia 810, rather than android phones i'm interested in windows phone.

Great work. It helps to choose better smartphone for Windows lover. From your words I will prefer Nokia Lumia 820 in terms of data speed, battery backup and especially for look.