The first question my 9 year old son asked me when he saw the LG Optimus Vu P895 on my desk was, is it a tablet or a phone. Yes, with its 4:3 aspect ratio and big screen display, it is a smart baby born out of the marriage between a smartphone and a tablet and the name "phablet" is more apt for it. This 5 inch smartphone from LG is bigger than most other phones, but is slim and light weight for its category. The large screen makes it easy to watch movies and take notes comfortably, making it a tough competitor for Samsung Galaxy Note series.

LG has released a few different flavors of the Vu. The original Vu (F100S) was released for Korean market and later they released the Vu L-06D model for the Japanese market. The P895 series is for the international market, including USA, UK and India. The original P100S version came with Android 2.3 (Gingerbread) but the global version is preloaded with the Android 4.0 Icecream Sandwich and a better CPU configuration.

As I said earlier, this phone is big and is meant to compete with other phablet devices like Samsung Galaxy Note. We received a unit for review in our Gadget Review Center and our team spend a few days with this device. Let us go through various features of the Optimus Vu and see what features impressed us the best and what features did raise some eyebrows.

Before we get into the details, let us take a look at the body and design. The 5 inch display occupies major portion of the front side of the Optimus Vu. With the 139.6 X 90.4 X 8.5 mm dimensions, it is the world's widest branded phone in the market currently. This phone weighs just 168g, which is very reasonable weight for its size.

The full black body is protected with a metallic strip around the edges which adds an elegant look to this premium phone.

The backside of the camera has got a textured rubberized panel, which gives good grip in the hand. On the back panel, you will see the 8 mega pixel camera and LED flash placed in a metallic plate. Just below that you will see the LG logo. 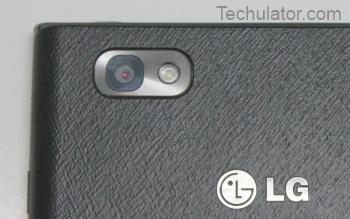 On the top of the Vu, you will see the following options:

On the right side of the phone, you will see the volume buttons, which can be operated with the fingers in the same hand when you are holding it in your palm.

The left edge of the phone has the micro SD card slot, which can be opened only using some sort of pin (SIM Cap Opener), which is included in the box, thanks to LG for paying attention to small things.

Overall, the phone looks big and wide but fits well in your palm, unless you have a too small palm. It is quiet comfortable to hold the LG Optimus Vu in one hand and write notes using the stylus. 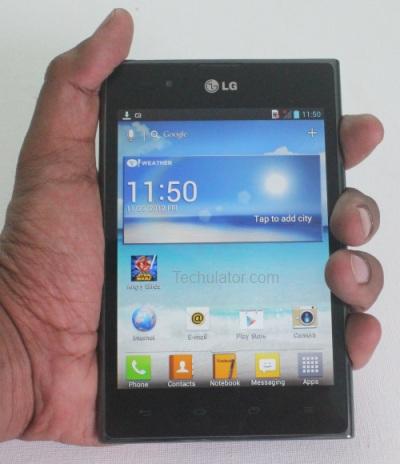 Optimus Vu has a 5 inch screen with 1024×768 pixel IPS display, compared to the 5.5" screen of Galaxy Note II, which has a resolution of 1280×720 pixels. The 550 nit brightness with 16 million colors gives good brightness, clear display even in bright sunlight and has great viewing angles.

It comes with an aspect ratio of 4:3, which means a wider screen compared to most other similar devices that use the standard aspect ratio of 16:9. LG claims this display is ideal for taking notes, editing documents, reading eBooks and web browsing and we have no reasons to disagree. Even though it looks pretty good when you are reading news paper or magazines with the 4:3 aspect ratio, there are times when you will feel the 16:9 is a better choice, especially when you watch movies recorded for 16:9 aspect ratio.

Obviously, it comes with capacitive, full touch screen like any other modern smartphones. 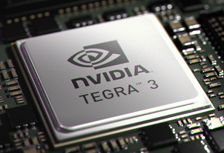 Optimus Vu P895 is powered by Nvidia Tegra 3 quad-core processor with 1.5GHz clock rate and loaded with 1GB RAM and 32GB of internal storage. The Galaxy Note has an advantage in this area, with its more powerful CPU (1.6 GHz Exynos quad-core processor) and better amount of RAM (2GB).

We tried several games and many apps and the Vu never had any problems with performance.

LG claims that it is using a new, advanced type of battery called "SiO+ battery", which allows larger battery capacity without increasing the physical size of it. The 2,080 mAh battery is not really the best in class, but is good enough to give you all day talk time and entertainment. The Optimus 4X HD from LG has comes with an 2,150mAh Li-Ion battery, which gives much more talk time and standby time. 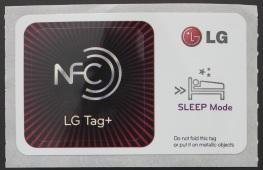 Optimus Vu supports NFC (Near Field Communication), allowing it to communicate with devices supporting the same technology. LG has taken care to include 3 NFC tags within the package to make it easy for you to switch to some of the frequently used profiles for the phone, including sleep mode, car mode and office mode. You may customize these tags to change the settings according to the need. For example, you may configure the "office mode" to switch the phone to vibration only and turn off ringer so that others in the office will not get disturbed when you get a phone call. All you have to do is, when you reach the office, tap the tag on the phone and you are all set. When you are leaving the office, just tap again on the NFC tag to cancel the office mode.

LG's QuickMemo app, preloaded with the Optimus Vu is one of the most promising Android apps, ideal for a device like Optimus Vu. With the QiockMemo, you can capture any screen on the phone, write notes on top of it using your finger or the included stylus and send it to your contacts using social media or email. The best part of it is, you can launch the QuickMemo on press of a hardware button, conveniently located on the top of the phone, which adds icing on the cake. Read more about the QuickMemo app.

The Optimus Vu is packaged with a stylus, which can be used to tap on the virtual keyboard to type, play games on the touch screen or to take notes using the LG's innovative QuickMemo App. There is nothing extra ordinary on the stylus but it does the job perfectly. One disappointing factor is, there is no pocket or clip on the phone to hold the stylus, which means you have to carry it separately with you. This also means you might lose the stylus before too long!

LG Optimus Vu comes with an 8 mega pixel, auto focus back camera and a 1.3 mega pixel front camera for video chatting. The back camera comes with a lot of fancy features including photo editing, face glow, Panorama view, continuous shooting, HDR and so on to make near-professional quality photos.

The maximum retail price of LG Optimus Vu is Rs 34500 in India. However, online shops like Flipkart offer good discounts and you can buy this camera at a a discounted price of Rs. 29999 currently. Checkout the latest prices in Flipkart.

LG Optimus Vu is a solid device for taking notes and double as a phone at the same time. It has got an elegant look and has all the features that you look for in a phablet. The QuickMemo app is an icing on the cake, no doubt. While many people consider the 4:3 aspect ratio is very odd for a smart phone, I would say it is of a personal choice. If you are more into attending meetings and need to take a lot of notes, this could prove to be a good fit. Also, for watching movies and playing games, this aspect ratio could be a good choice. You may be disappointed a bit if your only requirement is to use it as a phone.

If you are looking for a smart-phone from LG and not keen on using it as a note taking device, then check out LG Optimus 4X HD

What is SiO and SiO+ battery

SiO and SiO+ are used in modern smartphones like LG Optimus Vu and many others. these batteries are enhanced version of the Li-Ion batteries. Read further to learn detailed information about these type of batteries.

nice and big phone. i will buy this phone if i have money.

Phablet - coining a new word for LG Optimus Vu, that was fabulous. Once again that was nice bit of information about LG Optimus Vu. What about the other details regarding the camera, image / video capturing etc. ? I am eager to get more details on this LG Optimus Vu Smartphone.