iOS emulators for Windows allow you to run your favorite iOS apps on your Windows computer. Isn't cool to have your iPad apps run on the rival Windows machines? Yes, that is possible with the emulators. Just like the Android emulators like BlueStack make it possible to run Android apps on Windows, you can use the iOS emulators to achieve the same purpose.

However, iOS and Windows have far different features that will make it impossible for any emulators give a true iOS experience on a Windows PC. A true emulator should be able to run all iOS apps on a Windows computer but in reality, there is no single emulator exists that achieves this.

What is an emulator

iPadian is one of the popular apps that bring iOS user interface to Microsoft Windows, giving an iPad kind of feeling for your PC. The beauty of this system is, it does not make any changes to your computer. Instead, it is a stand-alone desktop application for Windows, that opens up a screen which look like an iPad user interface, but still working with your Windows files and applications only. iPadian is an open source project, which can be downloaded as a compressed file of 35Mb from Google Code.

iPadian depends on Google AIR and if you don't have the AIR installed, the app will not run.

Is iPadian a real iOS emulator for Windows PC

In the true sense, iPadian is not an iOS emulator. It just simulates iOS user interface on your Windows PC. It is desktop application developed using Adobe Air and is not a true emulator that allow you to run any iPad apps on Windows computer. You will not be able to play your iPad apps or access iTunes on your computer using this software. iPadian provides access to a virtual app store that gives the feeling you are using iOS app store but behind the scenes it is just a packaged set of apps that run on Windows. It has nothing to do with iOS.

I tried using iPadian on my Windows 8 computer and it seem to be a good option to organize the start screen of Windows 8 which many people do not prefer to use. Here is a screenshot from my Windows 8 laptop, which runs iPadian and shows the desktop shortcuts in a much better interface than the new Windows 8 start screen: 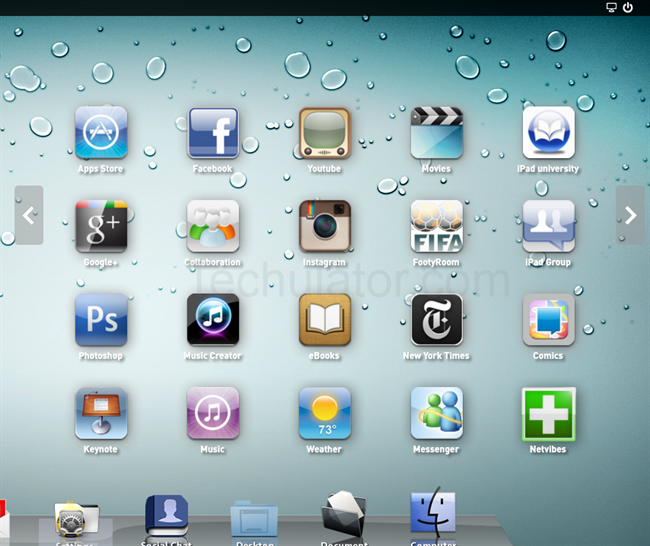 If you are looking for a real iOS emulator to run iPad apps on your Windows PC, then iPadian is not your choice. You must consider some other emulators like iEmu. Apple provides an official iOS simulator, which allows you to run iPhone, iPad and iPod apps on a Mac computer. There is no official iOS emulator for Windows yet from Apple and I doubt if they will ever release one since the operating platforms are significantly different and it is not possible to come up with a near perfect emulator.

You can click on the icons to choose iPad or iPhone interface. Also, there is an option to toggle between landscape or portrait mode. To make this emulation more effective, you may disable Adobe Flash Player on your browser and also change the user agent to iPad user agent string.

I want to know that if Whatsapp application will be run on this emulator? Please let me know.

i have installed ipadian on my windows 8 laptop. I have trouble finding certain games and apps. I cant find Game of war, kingdom of camelot or the Line chat app.
Anyone have any suggestions?

That it looks better than Windows 8 metro style is honestly opinion only. I love the metro style over the apple reused style for the past 6 years. It's bland and boring with little to no information on each unless opened. I'm just looking for an emulator to get Hearthstone free pack of cards.

I am looking for an emulator to get referrals on Knights and Dragons iOSx version, and help would be appreciated!

Best bet is to ditch apple and try ANDroid emulator. Android has most all the same apps. I use Andy Android emulator and am able to play Clash of Clans, use whatsapp or do whatever, like you are actually on the phone or tablet.

"...I doubt if they will ever release one since the operating platforms are significantly different..."
Even iOS is different from OS X. It's not the reason. The reason is Apple doesn't want it. Running a platform on an other platform is emulator job!

When I went to the website to download the ipadian emulator, the browser notified me that the website wasn't secure and should be avoided. I ignored it and tried to download the emulator. Right away my firewall came in action because of a virus alert! My advice: avoid this emulator!