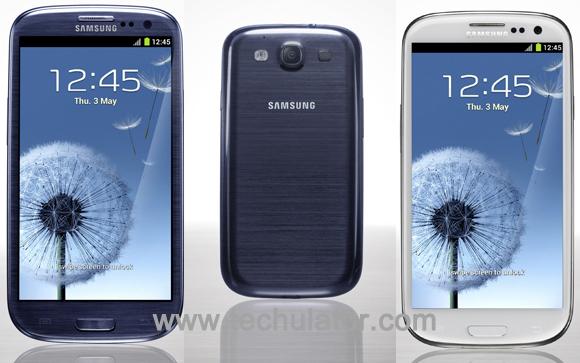 The Samsung Galaxy S3 comprises of Super AMOLED capacitive touchscreen with 16M colors with LED-backlit, capacitive touchscreen and runs on Android OS ie, v4.0.4 (Ice Cream Sandwich) version which can be upgraded to 4.1 (Jelly Bean) which is the latest OS of the Android. It has a good speed of functioning because it runs over 1.4 GHz Cortex-A9 Quad-core processor and also has 1GB RAM. The main thing is it's memory capacity ie, it has an external memory of 64 GB and has an inbuild memory of 16GB. Most of the music/audio formats and HD-videos will work in this smartphone. While considering it's camera features this smartphone supports dual camera ie, primary one and a secondary one. Primary camera is of 8MP in which HD videos and pictures can be taken using the primary one and it is featured by touch focus, panorama, touch focus face detection, HDR, geo-tagging which makes the Mobile Phones mind blowing for users. The secondary camera is of 1.9MP which is usually used for Video Calling over the range 3G, 4G, Wi-Fi. Awesome video capturing is done by this smartphone. High Definition videos can be captured using the primary camera at a frame rate of 1080p@30fps. This phone also supports 4G,3G, 2G, Wi-Fi, Bluetooth v4.0 with A2DP, GPS, microUSB 2.0, GPRS, EDGE. 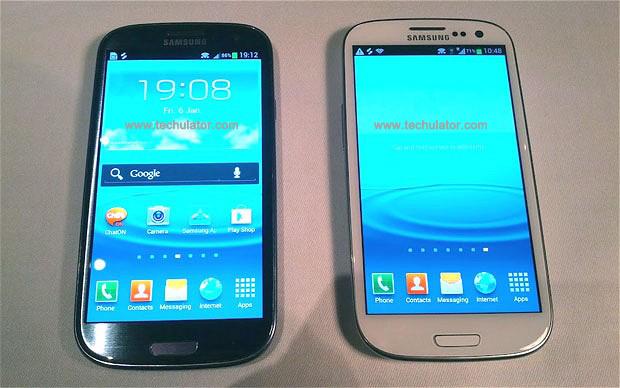 New generation Android Operating System is used and a new multimedia technology is used here, so the application are more faster. It comprises of preloaded necessary Applications.

This smartphone comes with dual camera. Primary one is of 8 MP camera with a resolution of 3264x2448 pixels and also has LED flashlight and auto focus featured by panorama, Geo-tagging, face detection and touch focus facility. It also supports HD video recordig 1080p@30fps. Secondary camera is of 1.9MP with a frame rate of 720p@30fps and mainly secondary camera is used for video calling over Wi-Fi and 3G/4G.

This smart device works more faster, since it has an inbuilt memory of 16/32/64GB and it runs over 1.4 GHz Cortex-A9 Quad-core processor.

The phone supports sensors such as Accelerometer, gyro, proximity, compass and barometer. And lot of pre-loaded application can be downloaded from the android market.

Samsung galaxy S3 with Android os is available in the market at price of Rs 32108. 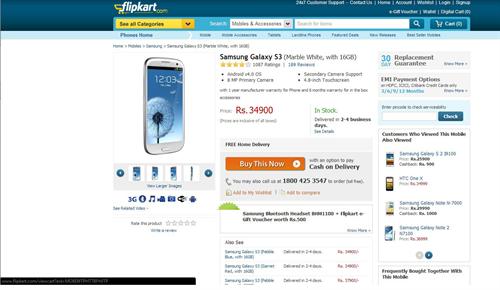 If you need to buy this smartphone all you need to do is click on the link given below. http://www.flipkart.com/samsung-galaxy-s3/p/itmdbwuthfdz85cc

Story of S3… I should call it worst experience of my life.
I completed a costliest deal of my life regarding something of personal use. I wanted to buy it because I was known about its pros. I didn't have any credit card at that time and my debit card wasn't able to buy it. I asked my fiend for his credit card, Thanks to him he led my way. S3 was in my pocket, I was very happy coz it's S3.
Nearly a month passed, It started hanging, deleting messages itself. Not able to call anyone at 1st time. Youtube videos couldn't buffer. I thought, I installed some wrong apps which is causing the problem. It was reset time for this product. I reset it and started using, after a month same or says much more devastating problem happened. It started hanging, showing not readable sms, screen blurred.
Next day I was taking it to Samsung care. It slipped from my hand nearly 2.5 ft from ground…touching the ground from its one corner.
Its display gone, wasn't starting, I saw there is some crack inside of gorilla glass, its display crack. Ohhh no… God ..plz don't do it. A horrible experience. I was freaking !!! I lost it. I took it to Samsung care; they asked me around 7000Rs for the repairing. I told them to look at the warranty and extended warranty card, but he told sir “it will cost you this amount". I asked him for the favour coz it's been only 2 months and it was just 2.5 ft. He told me “We don't give physical warranty".
Than what kind of warranty do you have, bla .. blah
I refused him to repair it. Why??
Let me tell you.
1. It uses gorilla glass (made by Corona com.), which offers great service but inside it they have horrible display which is going to crack down, It will cost me again.
2. There were other customers, who had same problem. But they had their wallet full, and none of them didn't ask if it can cost less.
3. It hangs and very very bad battery service.
4. Software, oh no!!! poor file management.

I recommend you please never ever by this product. It won't cost you only MRP, it will cost you much more. Samsung care people doesn't care about you that already paid a lot of money and its been few days. Everything you see in advertisement is waste if it cannot protect its body.
Again please don't make any mistake that I did.

Dear friend,
"Warranty card is only for software related problems and not for any hardware related problem"
The above sentence is not only in the case of samsung. This is also related to other companies like Nokia, sony etc.
By using the handset properly it not cause any hardware problem. I think your handset cause this disaster because you have purchased some complaint smartphone. Before purchasing the handset try to check if your handset face any problem. If your handset face problem within 1 or 2 days you can take the smart phone to the shop where you have buyed and thereby they offer you a new one.
The most common defect in android devices is the battery backup is low and don't think that this is the only defect of samsung galaxy s3. This defect is common among branded android smartphone.
My friend bought this smartphone and he face no problem execpt battery backup. The better solution to solve your problem is that try to update your device firmware. I think this will solve your problem.
Regards and thanks
Rihan

I bought a second hand mobile from quikr.com and I had to root my Samsung S3 because it was a T-Mobile version. This phone had some serious heating issues. But after installing a Custom ROM the phone is running flawlessly.