Pros and cons
Pros- The graphics and controls of the game is truly A class.
Cons- The game has only 51 levels

Tap your screen and solve the puzzles
Ichi game is a brainchild of Stolen Douch games. It is compatible with iPad 2 and iPod 4. The game wasn't initially meant for Touchscreen users, but it was destined to mesmerize them. The name has been derived from Japanese word, which means the top slot. This is a game where single taps and holds on the screen are used to solve puzzles.

Ichi is a game meant for all those players who can handle high threshold of stress. There are balls that travel round the screen and it must bounce off against walls and triangle objects that are littered all around the screen. The triangles can be interacted easily with the tap of a screen. The first few levels are simple and easy, but as one progresses the level becomes tough and difficult. Adding new elements can be a treacherous thing; you need to add them through tapping, like rotating triangles, toggling objects, etc. The ultimate goal is to collect all circular objects with just few taps.

It has a grading scale A,B,C and the game explicitly state that how many grades are left before the grade is lowered, which in turn is quite useful. The game doesn't have compelling graphics, but they are enough to grab one's eye ball. The game keeps you addicted for hours and hours, and the paper aesthetic makes the game just the best.

The puzzles or quests are well designed, and some quests are extremely challenging, and the solutions always make sense. 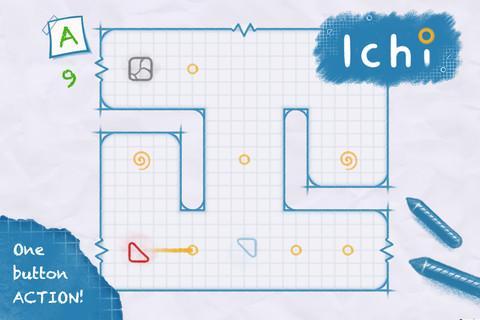 The only thing that goes against this game is a lack of content. It has been launched for 51 levels- with the assurance that levels will be increased. Also, the game can be completed within a short period of time. No doubt, pencil aesthetic and little touches are like smudges where the objects are rotating to make us feel that game is played on the paper, but it would have been better if there were alternate modes or anything outside the main mode.

If you don't like the inbuilt level of the game or you have an idea for genius level, you can create and share the custom levels. It is easy and simple to use the editor and make custom levels.
When the game was recently launched, the level sharing mode suffered was causing the game to crash again and again, though it worked earlier in a better fashion. The major errors was a server crash at the launch of level creation mode, but now the problem is fixed and is working properly now.

It is an incredibly charming puzzle that seems easy on the first go. When you start playing this game, it becomes difficult to master. Unlike other games that promote violence in the form of battle scenes, warriors or store of arsenals, the game doesn't offer the same elements. It is a one button affair game that requires muscle twitching and a quick reaction.

It is a fun puzzle game that fits into your requirements. What make the concept great are well designed and extremely challenging puzzles. The game controls make this game an ideal game for all those who are addicted to mobile games.

Suburban Mysteries: The Labyrinth of The Past game review and walkthrough

Clairvoyant: The Magician Mystery review, walkthrough and how to play tips

Good review. I made some videos with the walkthrough of this game. If someone is interested, check it out: https://www.youtube.com/watch?v=fr1LTV5tGaM