Pros and cons
Pros- The game is a voyage of fun and entertainment. The twists and turns add spice to the game.
Cons- The game urges for explanations for certain elements.

A game where being bigheaded is a compliment!

Big Head Bash is a battlefield game where your mission is to destroy your enemies. It is a fast paced, vibrant game craving for originality and innovation.

Gameplay
The game is presented in open beta on Kongregate, and hope so, after reading this game review the developers will try to make it quite user friendly.

The game is lively and vivacious. On the first beat, you will feel toy shop has come to life. Robots, soldiers, and other toy characters seem to have grabbed weapons against each and they are ready to fight. The game is available in 2D arena levels, and the team who kills the maximum is declared as the winner of the game.
USP's of the game

Big Head Bash is set in the backdrop of bloodshed, war and confrontation; hence it is perfect for adventurous players who have zeal to win the game, come whatever may. It is incredibly amazing game with following unique proposition
• It has incredible and perfect game controls for the game challenge.
• RPG elements add positivity to the game. Once you kill your opponent, your score will move up, and you will be able to purchase more powerful weapons and silly heads for your character. The game doesn't have much in store, but we hope that things will change sooner or later. 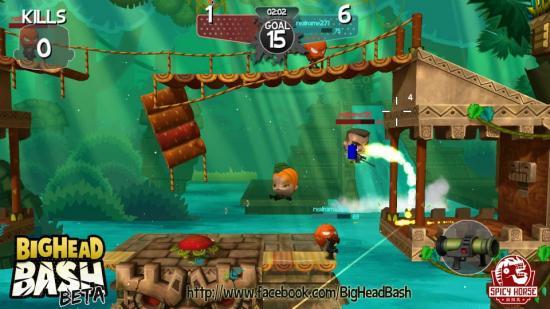 Game Controls
• The mouse aims at your gun, while left click on gun and right click on weapon change.
• Keyboard assists you to move your characters, and permits you to jump, double jump, drops down and reloads.

The other factor that may increase your chances of victory is by being an iron man. An indomitable spirit t win! What translates this game into a full suit of powered armor is graphics. The game can fill colors even those who are born with achromatopsia. A perfect pick up and challenge game.

The catch is-when you stack up the kills, your head enlarges, thus making you an easy target of critical hits. What acts as armory in your arsenal is killing at least three soldiers, if you are able to complete this mission you can press shift and activate a bash mode that makes you really brawny and sturdy.

Major disappointments
The major glitches of the game are presented below:
In the present state, the game is confusing and baffling.
• The explanations are missing.
• You have tickets and coins in your pocket, but there is no clear explanation, as to which you need to buy and what is available on free of costs bases.
• The bone of contention is strange renting style system, by which you can rent out weapons for a short while, and then you have to buy them again.
• Other problem is of stats and visuals.

At the commencement the game may sound fair and reasonable, but with passage of time the game becomes dull and repetitive.

The Crew online game: 4 things you should know about it

The Crew, an online game developed by Ubisoft, is launching this year, but there are a lot of people who still have no idea as to what this game is really all about. So if you are planning to pick this racer up, you should peruse this article before heading on over to the store.

How to use local network to play online games?

You have option to play games with your friends and family on computer which is on Local Network or Home Network. These Games are known as Lan Games or Online Games. If you have computer in your room and another computer in your brother's or sister's room, then you can play Lan Games with your brother or sister. You just have to upgrade your local network and make a little change in internet setup.

Read this article to know the best Role Playing games you can find on the App Store of Windows 8. Know their features and highlights that made them the top 5 most played games on Windows 8 smartphones, tablets and computers.

Why do most Kickstarter project fail to deliver on the promises?

Kickstarter has been one hell of a crowdfunding source for last couple of years helping a lot of developers to create their dream projects and bring them to reality. But is everything going fine? Well, there are a lot of things under wraps that you need to see. Read on to find out more.