The Tomtom GPS is available in 3 different varieties i.e. Via100, Via120 and Via125 in India. This GPS stand out because of the features integrated in it. Usually the GPS that is available with the smart phones is an assisted GPS, which works only under the support of the mobile operator and the GPRS connection. But TomTom navigation system is independent of network support and operates directly under the connectivity of satellite. It operates by the support of up to 40 satellites which surprisingly also involves the US military satellites. As such the company assures its users of precision in its performance in terms of accuracy.

We reviewed all three models of TomTom and had extensive hands-on review of TomTom 125. We tested it on various locations in Bangalore and also used it while driving to various destinations. Device performed according to the expectations in most situations but it failed to show accurate location in certain places especially when there are new roads and buildings. A GPS can be as accurate as the data available in their map database. Considering the GPS systems are quiet new in India and also our addresses are not well structured, we cannot expect 100% accuracy from any navigation systems. It is very common in many cities in India that the same road may have several names and there may be multiple roads and buildings with same name. It may take years before India get a well structured address/map system. 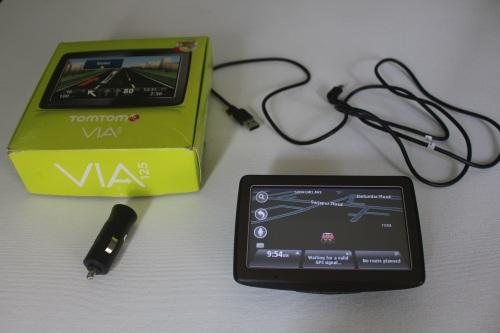 The GPS units from TomTom looks very sturdy and have an ergonomic shape that fit well in your hands even though you will not be using it in your hands. What I like best is the retractable mount, which can be expanded according to the need to place it on the dashboard or on the front glass of the car. The air sucking stand is easy to use - all you have to do is, place the stand where you want to fix it and just turn the knob - it will stick to the place with no worries of falling down later.

One thing that I wish TomTom would change is, the position of the micro USB connection. It is placed next to the mount and is hard to plugin or remove the cable. Until you get used to it, you may need to even take out GPS in your hands to accurately locate and connect the USB cable.

TomTom Via series GPS in all of its 3 versions comes with a voice guided navigation which actually guides the users vocally while on the move. The voice assistance in the devices is available in 11 different regional languages in male as well as female voice.

The top two versions are equipped with voice command as well which helps the users to command their destination to the device vocally. However, the commands are predefined in the device and the user shall have to use the predefined commands only. 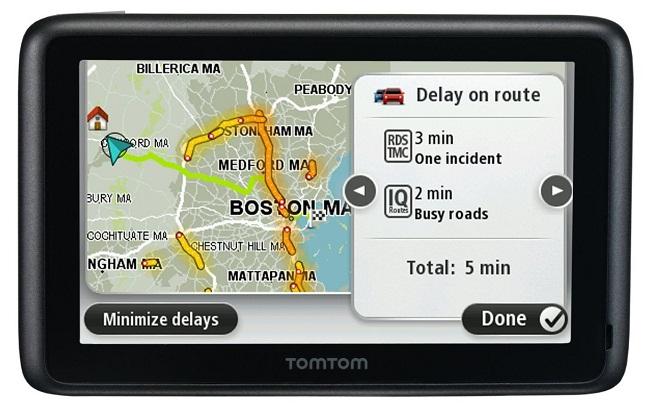 Your vehicle, Your device, Your route - choose the best route for you with more options from TomTom

The devices also provide the users with an option of upto 3 different routes to the given destination: Fastest, Shortest & Eco route. The fastest route is preferably the main or the ideal route to the destination. The shortest route is the one that involves covering the distance via lanes and by-lanes. The Eco route is the one that is through the greenery areas. However, the Eco route shall not be available for many of the destinations.

Not just a GPS but use as a phone

The top two versions of TomTom Via series released in India also have the Bluetooth Sync feature which can pair with any Bluetooth enabled cellular phone and provide the user a hands free access to conversation as well as access to the phonebook.

The Advanced Lane Guidance is one of the cool features that make the device stand out from most other devices including the phone based, assisted GPS devices. You can give voice commands to the device and it would recognize and navigate to the destination. I tried various commands like:

I usually have a bad luck when it comes voice recognition with automated telephone calls. But TomTom surprised me with a 100% accuracy on voice recognition. It is to be noted that the device can recognize only a limited set of commands and the rest of the words in your voice control commands will be ignored buy the unit.

Unlike most other GPS devices, TomTom currently offers free lifetime maps in India. In many other countries, TomTom still charge a fee for updating the maps. To get free updates for your maps, all you have to do is, connect the device to your computer using the provided mini USB cable and run the MyTomTom software. The maps available in the devices are however animated. In case users find error in the current map available, they can correct the maps and share the same info with TomTom.

Accessories that comes with TomTom in India

For the ease of access in cars, the device has a dual mounting stand that can stick on the dashboard or the windscreen. The mount is retractable so that it will fit well inside your car drawer when not in use. Also, it comes with a micro USB cable and an adapter to use in car. There are no other accessories provided.

So far, TomTom has only 3 GPS products for Indian market. They are the Via 125, 120 and 100 series respectively. No matter how much you pay, you will get the same map quality and navigation features. TomTom does not compromise on the quality of the navigation assistance just because you paid lower price to get a specific model.

The primary difference between these models are on the fancy side and not on the navigation support. The Via 120 and 125 series have the following additional features, compared to the Via 100 series:

In addition, the Via 125 series is bit heavier than the rest and has a 5" screen while both the other versions have a 4.3" screen. 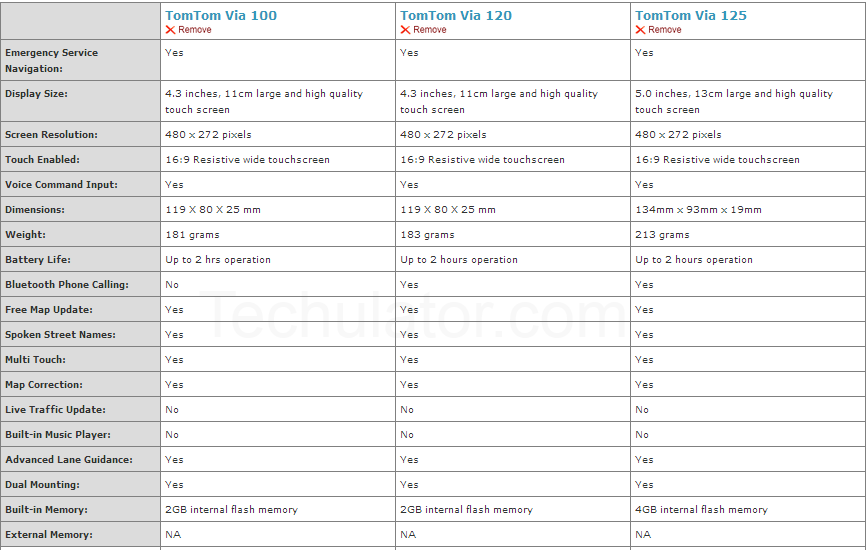 You can see a detailed product comparison here: Compare TomTom Via 125, 120 and 100 series.

However, there are certain drawbacks of the TomTom GPS device. It doesn't work under concrete roof, which is a general drawback for any satellite based GPS devices. In addition to it, the signal is found to be week when the weather is cloudy. Also, TomTom map shops are not available in India. These maps shall involve maps of other nations, which anyways might not be needed if the user is within the borders of India. But the device shall prove to be obsolete if carried out. There have been questions about the user friendliness of the interface as well. But considering the good features, people might like to try it out. Let's wait and watch how it turns out to be.

The following resource gives a detailed report on five affordable GPS navigation devices which don't need a SIM card and GPRS access. The cost of these devices lies between Rs. 6,490 to about 16,000.

I just brought TomTom Via from a retail shop. I was thinking the hardware of these devices are better than the mobile phones. I do have a paid Sygic maps app for android. That is 10 times better and reliable then TomTom.
1) This tomtom device and most of other tomtom products are highly outdated. The hardware is like 200MHz processor with linux. Even a micromax phone for 7K is 1GHz processor.
2) The issue with tomtom is if you try to create a route to other city, its calculation of road takes a minute. This happens in a second on Sygic on android.
3) Moreover Tomtom touch screens are 10yr technology. Very low resolution, low viewing angle plastic filmed screens. Meaning on an angle you cannot see the screen correctly.
4) As others have mentioned, typing on screen is slow. Lot of mistakes.
5) The User Interface(UI) is horrible. There are dozons of clicks to just do anything. Difficult to pan and zoom while in driving mode. Searching locations gives wrong results.
6) If i search for same location in Sygic(powerd by mapmyindia) and Tomtom, we get 1/10 of results. I mean mapmyindia wins. I am going to have a youtube video on this.
7) for 10-15k price tomtom provides 5yr old 2D maps. The world is providing 3D maps. Check on mapmyindia or sygic.
8) horrible customer service. I i call them they dont respond. If i raise issues in their forum, they delete my posts. Dirty attitude for india.

I would recommend to buy any mapmyindia product as they have been in India for long time. Or buy a decent 10K android phone on Flipkart and download sygic maps.

I bought TomTom Via 120 few months back and was trying my hand in driving local to Delhi NCR. There are multiple issues with TomTom.

1. In comparison to Google maps on Android, which are far more better and faster. In TomTom, you have to search like a kid. If you write the whole description, it wont understand. Like if you search for Sai Mandir, Lodhi road, Delhi, you have to first search Delhi, then Lodhi road and then Sai Mandir. All it will take 5 min of yours. And same thing in google, you just punch in one go: 'sai mandir, lodhi road, delhi'.. it searches and directs you.. much faster.

I am planning to buy Tomtom via 100. However, while glancing at the specifications, I observed that it has only 2gb of internal memory. Is the internal memory significant while updating maps? I do not want my device to give out insufficient memory errors whenever I update maps, which would make it redundant. Kindly advise me on this issue. Any other suggestions are also most welcome.