Amazon ruled the tablet markets with its Kindle Fire HD, which was appropriate in every term, be it budget, be it simplicity or be it brand value. Kindle Fire was loved by everyone. However, with the announcement of Apple's iPad Mini, Amazon might be getting very tough competition in that niche.
In this article, we are making an effort to compare both these amazing tablets and would try to conclude which one has an edge over the other and why. So let us begin. 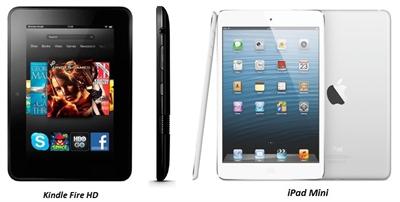 The iPad Mini measures as 7.2 X 200 X 134.7 mm whereas the Kindle Fire HD measures 10.2 X 193 X 137.2 mm. The major difference here is that the iPad Mini is much thinner than the Kindle Fire HD. Apart from this difference, the dimensions of both the devices are almost comparable. As far as bodies are considered, Apple's iPad Mini has an edge with an aluminum body back in white and black options whereas the Kindle Fire HD has a back panel which is make up of rubber and plastic which is though comfortable while giving a grip to the device but does not aesthetically supports the device. So here, Apple's iPad Mini wins the catch.

Apple iPad Mini weighs 308 grams, while on the other hand the Kindle Fire HD weighs 394 grams which is way too heavier than the Apple iPad.So once again, iPad Mini steals the show with its very lightweight. 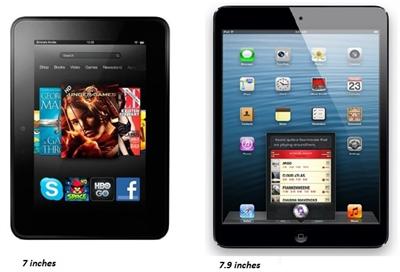 However, the Kindle Fire HD offers a better pixel resolution but, on the other hand Apple's iPad Mini offers you a larger display screen which cannot be ignored at all.

If you are serious about a big screen with a cool form factor, you might want to go with iPad Mini. Therefore, it will not be fair to conclude a winner here. So let us call it a tie between the two this time.

Comparison of Memory and Storage

Though there has been no confirmation of RAM value in the iPad Mini but considering that the tablet borrows many of its features from the iPad, it is supposed to have a RAM of 512 MB. The Kindle Fire HD on the other hand has a whopping RAM of 1 GB, which is sure better than the iPad Mini.So here clearly Kindle Fire HD wins over the iPad Mini.
Both the devices do not have an external SD card slot option. The iPad has 16 GB, 32 GB and 64 GB variants whereas the Kindle Fire HD has the options of 16 GB and 32 GB only.Therefore, if you are too adamant on having a 64 GB storage space, the iPad Mini is the only option left for you.

It will not be fair to predict a winner here because there are almost the same storage options. If Kindle Fire HD offers less storage, it also has the benefits of lesser price. So we have a tie here too. 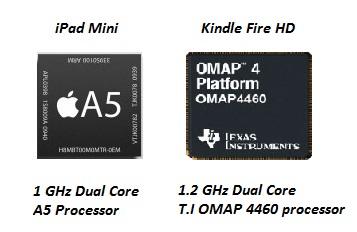 The iPad Mini features a dual core 1 GHz Apple A5 processor whereas the Kindle Fire HD has a dual core 1.2 GHz T.I OMAP 4460 processor.
There is not much difference in the performance of both the devices however, both of them do not have the latest quad core processors which are quite common these days.

You will not notice any lags or glitches on any of the devices. So again, both are at par in terms of processor efficiency. However, Kindle Fire HD offers you a slightly better processor.

The Kindle Fire HD only has support for Wi-Fi and there are no cellular data options. The iPad Mini on the other hand has variants with both Wi-Fi only support and, 3G and LTE support.

If you need to have a Kindle Fire HD with cellular data support, you need to wait for Amazon to launch the new 8.9 inches Kindle HD 4G which is anticipated to launch soon.

As of now, iPad has a point here with all the data support options.

With both the devices, it is assured that you will be getting ample battery life for practical purposes. Both are at par as far as battery life is considered. Although Kindle Fire HD promises you a longer battery life but mind you, that Android consumes a lot more battery than the iOS.

The Amazon Kindle Fire HD only has a front facing camera worth 1.3 MP whereas the Apple iPad Mini on the other hand has a front facing camera with resolution of 1.2 MP and a rear camera worth 5 MP.
Clearly, Apple's iPad Mini steals the show here for sure. Though it is often argued that budget friendly tablets do not require a rear camera but still the Apple users surely have the advantage if a 5 MP rear camera which cannot be ignored at all.

Price and Other Features

Though in order to get rid of ads in the Kindle Fire HD you need to pay $ 15 extra but it will still be $ 115 cheaper than the iPad Mini.
However, it is easy to read books and surf instant amazon content on the Kindle Fire HD but nothing can beat the polished iOS 6 on Apple's iPad Mini. Also all the apps that run on the full versions of the iPad will be running smoothly and with full resolution on the iPad Mini too. That is what matters the most to the Apple fans.

It is obvious that the choice depends on the amount that you are willing to spend and what you expect from your tablet.
If you are looking for superior software and good looks and are willing to pay something extra for it, then go for the Apple's iPad Mini definitely. But if you are in habit of reading e-books and surfing Amazon content too often then, you should go for Kindle Fire HD for sure as it will also save you some money and you will be having the advantages of complete customization due to the Android 4.0 OS. Also you will be getting a much sharper display with the Amazon Kindle Fire HD.
The choice is ultimately yours. Both the devices have their own pros and cons.