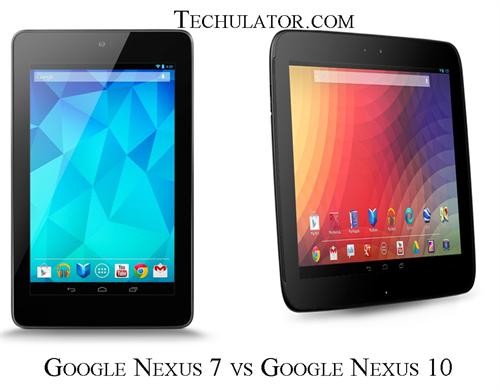 Samsung Google Nexus 10 is coming with the dimensions of 263.8 mm height, 177.8 mm width and 8.9 mm thickness. Weight of tablet is almost 603 gram. Tablet is coming with the resolutions of 2560 pixels width and 1600 pixels height, 10.1 inches touch screen. Also, it has almost 299 ppi pixel density for better and quality display. This phone supports multi touch facility for better and fast usage. Super PLS TFT capacitive touchscreen is used as its touch interface with 16M colors for better speed and fast touch experience. Super PLS TFT capacitive touchscreen is the latest touch interface technology for Windows and Android operating systems. It has Corning Gorilla Glass protection for rough use and supports multi touch facility.

Asus Google Nexus 7 comes with the dimensions of 198.5 mm height, 120 mm width and 10.5 mm thickness. Tablet weighs 340 gram so it is difficult to use for long durations due to more weight than most other tablets but the smartphone is lighter. The tablet is coming with the screen resolution of 1280 pixels width and 800 pixels height, 7.0 inches touch screen. Also, it has almost 216 ppi pixel density for better and quality display. Phone supports multi touch facility for better and fast usage. LED-backlit IPS LCD capacitive touchscreen is used as its touch interface with 16M colors for better speed and fast touch experience. Corning Glass is used to protecting the display screen. 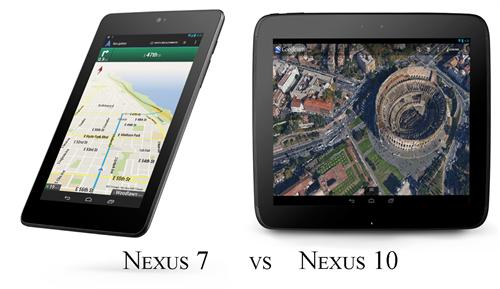 Sound features are same in both tablets.
No alert types are available in Nexus 10 and Nexus 7. These have loud speaker facility with stereo speakers. Also, supports 3.5 mm audio jack for hearing audios through 3.5 mm jack head phones.

In my experience Nexus 10 is better than Nexus 7. Because it has double RAM than Nexus 7. Other features are same in both devices. 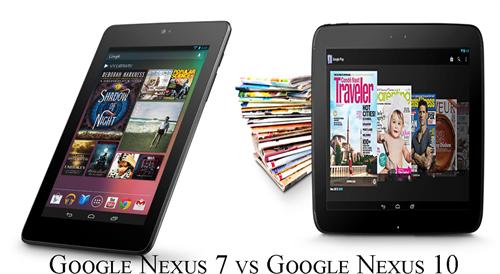 Samsung Google Nexus 10 does not support any network features. Because it is not a GSM device and we cannot use GSM features in anywhere. So it does not support GSM, EDGE, and 3G features. But we can access internet through WLAN only. It supports data transfer facilities like Bluetooth and USB version 2 facilities. Its Bluetooth version 3.0 with A2DP facility provides faster data transfer between other Bluetooth devices. Near field communication facility also provides beautiful data transfer facility with dual side. So we can conclude that there is no problem in transfer data in other devices. But we can only access internet through WLAN. So it is a disappointment from this tablet.

Samsung Google Nexus 7 does not support any network features like GSM are EDGE; it is not a GSM device. Same as Nexus 10 it can access internet through WLAN only. It has Bluetooth and Micro USB facility. Near Field Communication is also available in Nexus 7.
In my opinion, Nexus 10 is better than Nexus 7 in data transfer facilities. Nexus 10 has USB facility and Nexus 7 has only Micro USB facility. NFC is available in dual side in Nexus 10. But, Nexus 7 has only NFC facility.

Tablet has 5 Mega Pixels primary camera on the rear side of the tablet and another 1.9 Mega Pixels secondary camera on the front, with autofocus and LED flash. Secondary camera is used for video calling with peoples. Samsung Google Nexus 10 has 1080p@30fps video recording facility with which we can record large amount of HD videos through this tablet. So we can conclude that it is a good feature from Google because it has good quality camera and video recording feature.

Nexus 7 has 1.2 Mega Pixels primary camera on the rear side. It has 720p video recording facility and video calling facility.

In my experience, Nexus 7 is not good for image capture and video recording. Also, no secondary camera is available in Nexus 7. So Nexus 10 is good in camera and video features. 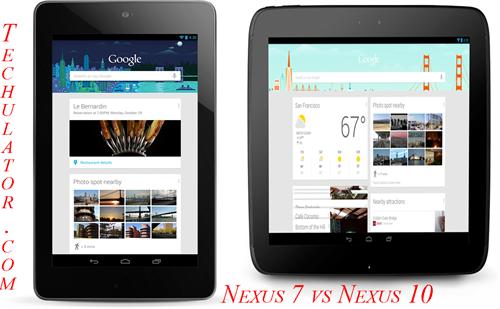 Samsung Google Nexus 10 runs on Android Jelly Bean operating system. Tablet is powered by Exynos 5250 chipset and Dual-core 1.7 GHz Cortex-A15 processor. It provides better performance from this tablet. Also, it has Mali-T604 graphics processor for better gaming experience. So it is good for gaming and other performances. We can conclude it is enough for tablets.

Nexus 7 runs on same as Nexus 10. But Nexus 7 is upgradable to version 4.1.2. Any way Google released 4.2 version Jelly Bean with security. Nexus 7 is powered by Nvidia Tegra 3 chipset and Quad-core 1.3 GHz Cortex-A9 processor. Also, it has ULP GeForce graphics processor.

Sensors like Accelerometer, proximity, gyro and compass sensors are used in both devices. These support HTML5 web browser for better browsing experience. These are do not support Java and Radio facility. Both tablets support messaging features like Email, Push Email and IM facility. Only Black color is available in both devices. It has SNS integration facility. Tablets have MP4/ H.264/ DivX/ WMV video player and MP3/ WAV/ eAAC+/ WMA/ Flac audio player facilities. Samsung Google Nexus 10 has Standard Li-Ion 9000 mAh battery for better backup. Asus Google Nexus 7 has Standard Li-Ion 4325 mAh battery. So Nexus 10 has better backup than Nexus 7. Other features are same in both devices.

If you want premium tablet, then choose Nexus 10 or you want low cost tablet choose Nexus 7. But camera quality of Nexus 7 is poor. No external memory support in both devices.

This is a bit of a biased article going for the Nexus 10.

Nexus 10 does not have Tegra graphics card. Many games are specified as "THD" (google THD Android games). Will these run on the Nexus 10?

You forgot to mention the "bulk" of the Nexus 10. I can easily fit my Nexus 7 in my pants pockets.

I can't comment further because I don't own a Nexus 10 myself, but I am a proud and happy owner of Asus Nexus 7. Peace out.

I have no experience with these tablet. I am also prefer nexus 7 than nexus 10. Large size tablets need better graphics than small size tablets. When comparing features, Nexus 10 better. Cost is also a big problem in the case of Nexus 10.

It may be noted, that NFC chip in Nexus 7 is NXP, and in Nexus 10 is broadcom, so Nexus 7 has more compability on some NXP cards, like Mifare Classic.