Pros and cons
Pros- The game is a journey where heart and soul comes alive with possibilities. Each step of the game has brought about new adventure. It has fantastic music and graphics that has relaxing effect.
Cons- The major disheartening point of the game is a lack of proper control system.

Air Mail- No such thing as old or young

Air Mail game is not restricted by the age; anyone can delve in this anxiety riddled, yet thrilling game. The game is a brainchild of Chillingo and N Fusion and is available on iOS. It has a compelling story that doesn't barely scratches the surface; rather the game is insightful and informative.

What the game is all about

The game is all about controlling a bi plane- flown by boy or girl in a mission to help people of Domeeka. The missions can be varied like it can be delivering food to drought affected area or it can be putting fires in the middle of a war zone or anything. The game is not at all violent or destructive; it's all about assisting the people in need or sabotaging the enemy. 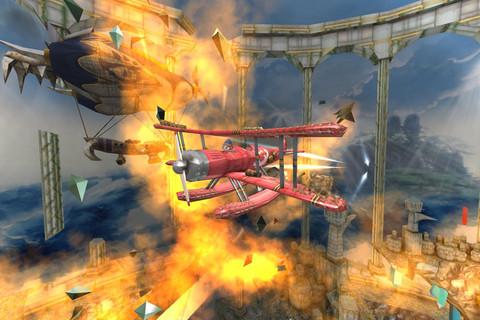 What attracts attention of the players is, you are flying a bi plane and there is no speedometer, no indication of fuel, and no fuel gauge. It clearly indicates how simple the game is. Your job is limited to carry out a particular task via your bi plane, and enjoy the picturesque in en route.

The game is a welcome revelation because it doesn't promote violence in any way; barring few missiles that enemy's fire on a player; there is no evidence of death or air combat; the missions involved is flying to different area and delivering the things required in that area.

For instance, in one mission the player has to extinguish the fire; in order to do so he lands on the water, fill buckets and drop off the water to the affected place.

The players are rewarded 5 stars for completing the mission precisely and accurately.

The game takes you to the varied places where you can explore the unexplored area. The graphics of the game is particularly drop dead gorgeous, particularly the crimson led sunset and blue skies, that reminds us of the Goddess Nature. The game's setting is particularly inspired by works of Manga-Ka, director Hayao Miyazaki, but upto a certain extent.

The major turn off, of the gameplay is the missions are repetitive, and ultimately they prove to be unchallenging.
The other hiccup is multiple control system i.e. you can have a choice of tilt based control system or a virtual D pad, or a blend of both. But the control systems are vague and insensible. The tilt control system is hyper sensitive and don't have a high calibration point. Ultimately, you may think that bi plane is controlling you unless and until you learn how to handle it properly.

The unique selling proposition of the game is getting to explore new items in the free flight mode, it is something that any goal oriented player will surely enjoy. You need to unravel the missions, and enjoy the beautiful scenery.

The time based challenges ensure that players remain glued to the game. The game's story lacks subtitles; this may render Air Play an unsuitable game for those who are hard of hearing.
Otherwise the game lives upto player's expectations.