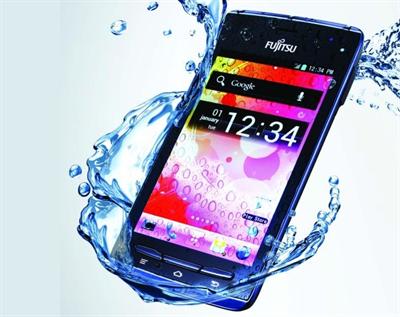 How about being a proud owner of a waterproof smartphone? If so Fujitsu has brought something special for you. Fujitsu which has a bright name being a global manufacturer of micro electronic devices has entered the Indian territory with Fujitsu F-074 waterproof android smartphone. Partnered with Tata DoCoMo, this device would compete with other leading Indian manufacturers like Micromax, Karbonn, Videocon and Intex are in the league unveiling a range of phones targeting the Indian customers.

The device which was was launched under the name Arrows F-07D in Japan now swims into India at a price tag of Rs. 21,900. The Fujitsu F-074 was uncovered on 31st October at an event held at Bangalore. The highlight of the phone will be its waterproof and scratch resistant capacity which truly makes it stand alone in the crowd.

The introduction of Fujitsu F-074 smartphone will be stepping stone for the company to continue its plans to unveil more innovative products in the world market. Pre-loaded with some interesting features, the Fujitsu F-074 will bring delight to the advanced techies with its special capability of responding to the changing climate.

For more excitement the phone boosts of having the most advanced Motion Conscious Audio system, which is capable of checking the environment and modulate the incoming voice and render clear voice quality. Meanwhile Tata DoCoMo offers few exclusive plans for its customers through Fujitsu F-074 smartphone.

The Fujitsu F-074 smartphone spots a 4-inch AMOLED capacitive touch screen display with 480 × 800 pixels resolutions. Powered by a 1.4 GHz Snapdragon S2 processor, the device runs Android 4.0 Ice Cream Sandwich OS. Embedded with 512MB RAM the phone has an internal storage capacity of 1GB which can be expanded up to 32GB with microSD card. The Fujitsu F-074 which houses a 5MP rear camera would bring delight to its users.

This smartphone will suit the changing weather in Banglore as the brightness and display changes automatically according to the intensity of sunlight. Designed for perfection this 3G handset can be kept secure especially during the rainy season. For connectivity 3G, Wi-Fi, Bluetooth 2.1 and GPS are included. A 1,400 mAh battery serves a second life for the phone which gives a decent battery backup.

Added to it, those Tata DoCoMo prepaid customers buying a new Fujitsu Handset can enjoy 1GB data every month with the recharge of FRC 250 limited for 2 months. This highly durable smartphone is currently available priced at Rs 21,900. The phone will be exclusively available through online dealers and also through the retail stores.