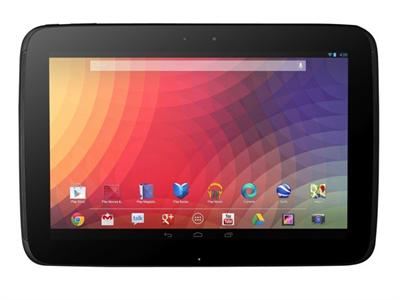 Google partnered with Samsung has unveiled the 10 inch Nexus, touted as "the highest resolution tablet on the planet". The tablet is all set to give a real competition to Apple iPad, Amazon Kindle Fire and Microsoft Surface tablets. The Nexus 10 will come with some unique features including the availability of Android 4.2 Jelly Bean 4.2 which serves multiple user profiles on a single device. More than that, regarding the price tag, the tablet arrives at $399 which is $100 cheaper than its arch rival iPad. But for a 32GB storage device the customers have to pay $499.

The specs, features and even considering the price factor too, the first look of the device gives much impression about its potential existence in the competitive tablet market. This 10 inch Samsung – Google device would be marketed under the name Google Nexus tablet. But more interestingly the Barnes & Noble Inc.'s 9 inch Nook HD+ with $269 and Amazon's Kindle Fire HD 8.9 inch tablet priced at $299 will start its campaign from 2nd November and 20th November respectively.

Google meanwhile unveiled few other Nexus tablets too which will begin its sales via Google Play store in the U.S., U.K., Australia, France, Germany, Spain and Canada. The 32GB version of Nexus 10 will also be available at more than 2,000 Walmart stores situated in the U.S. The nexus tablet will be the next companion staying close to your heart even while on the move. Considering the interest of the music lovers, Google is excited to launch free storage of music via Google Play which allows customers to upload their favourite songs to the cloud. The facility will be available in Britain, France, Germany, Italy and Spain starting from 11th November.

The Samsung Google Nexus tablet with 10 inch screen display boosts of having 2560x1600 pixel resolution which makes it the best comparing with its near competitors. Powered by a1.7GHz Samsung Exynos dual core processor, the nexus tablet runs Android 4.2 Jelly Bean OS which comes with some unique features including the ability of having multiple user profiles on a single device. So, family members can use the same device from different user accounts by swiping between the lock screen. Equipped with a 5MP rear camera and 1.9MP front camera, the Nexus tablet can be used to take your favourite snaps too.

On the connectivity front, the device comes along with WiFi 802.11 b/g/n (MIMO+HT40), Bluetooth, NFC (Android Beam), microUSB and microHDMI ports but no news about the availability of 3G or LTE support. The tablet which come with 16/32 GB internal storage options will have 2GB RAM, an additional bonus which is not much seen in other tablets.

The 9000 mAh Lithium polymer capable of providing 9 hours of nonstop video playback, 7 hours for Web browsing and 500 hours of standby time. Another feature of Nexus will be the Miracast which permit the users to broadcast movies or television shows from the screen to any television with help of a wireless adapter. As the tablet lacks a memory card slot, data storage cannot be expanded with memory cards.

The Samsung Google Nexus tablet will be available for online purchase from Google Play Store starting from 11th November. This facility will be primarily available for residents in U.S., U.K., Australia, France, Germany, Spain, Canada and Japan only. So, Indian fans should have to wait a little bit more to get its first touch. The tablet which starts shipping from 13th November will be is priced at $399 and $499 for 16GB and 32GB models respectively.

Catch the Samsung Google Nexus 10 Tablet on Video. This interesting video will explain more about the Nexus tablet.