After a long wait, the iPad fans made a glance at the Apple iPad Mini which was officially unveiled on 23rd October at a special event held at San Jose. As both Apple and Samsung have huge fans followers, the announcement of new products from the companies are taken with high regard. Even though the Samsung Galaxy Tab 2 P3100 is currently available, iPad fans have to wait a little bit more to get the first touch of the device which is slated to reach retailers on 2nd November. With the launch of the mid range iPad Mini, Apple aims to make their hold strong in the international tablet market which already have lot of competitors including Google Nexus 7, Amazon Kindle Fire HD and naturally the Samsung Galaxy Tabs.

But while considering the Indian tablet market, both manufactures feel quite instability with their business as there are few more local players in the arena including Micromax, Karbonn, iBall and few others too. India is the only country which flag offs a new tablet every day. Considering the fact about the revenue share percentage of various manufactures in the sub continent, it is much clear about the dominance of regional producers comparing with Apple and Samsung. Domestic player Micromax leads with 18.4% which is followed by Apple and Samsung with 13.3% and 12.3% respectively. 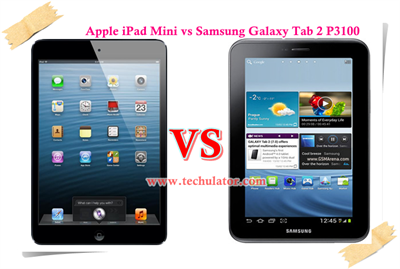 While talking about the iPad Mini, the device boosts of having a 7.9 inch LED-backlit IPS LCD capacitive touchscreen display with 1024 x 768 pixel resolution. Coming with a sleek design and a dimension of 200 x 134.5 x 7.2mm, the iPad Mini weighs just 308 grams making it's a comfortable device while on the move. On the other hand Samsung Galaxy Tab 2 has a 7 inch PLS display with 1024 x 600 pixel resolution. The device spots a dimension of 193.7 x 122.4 x 10.5 mm and weighs 341 grams which makes it little bit heavier than iPad Mini.

The iPad Mini is equipped with a 1Ghz dual core Apple A5 processor while the Galaxy Tab 2 is powered by a 1GHz dual core TI OMAP 4430 processor. Considering the Operating system, it's too hard to give a comparison as both are based on different platform. The iPad Mini is being constructed with iOS 6 and Galaxy Tab 2 comes with Android 4.0 Ice Cream Sandwich OS. The iOS 6 is an improvised version updated with more than 200 features which includes Apple Maps, an improved version of Siri, iCloud cloud storage, new Photostream app, new Safari app, PassBook app and much more. The Galaxy Tab 2 which is flovoured with Android 4.0 ICS will go ease with multitasking, customizable home screens, resizable widgets, improved camera capabilities, Android Beam with NFC sharing and many others too.

Taking the camera of both devices, the iPad Mini has a 5MP shooter with iSight technology and a 1.2MP front camera suited for making video calling. But the Galaxy Tab 2 falls short against iPad Mini with a 3MP rear camera and 0.3MP VGA front camera. For connectivity, iPad Mini is equipped with a Lightning port, Bluetooth and Wi-Fi. Brand new iPad Mini with 3G and 4G support is expected to get launched during the second week of November. The Galaxy Tab 2 also has Wi-Fi 802.11 b/g/n, Wi-Fi Direct, Bluetooth 3.0 and micro USB 2.0 Host as a part of connectivity.

As most of the customers do give more consideration to the storage capacity of device, Apple has taken keen interested in giving preference to that part too. The iPad Mini will come with three configurations – 16GB/32GB/64GB as internal storage while 512MB RAM (might be upgraded to 1GB) is common to all. But the tech enthusiasts are looking forward whether the device will be available with 8GB internal storage. Galaxy Tab 2 will have dual options for internal memory offering 8GB/16GB and a 1GB RAM support. Samsung offers an expandable memory up to 32GB with a micro SD card which lacks in iPad Mini. Set with a 16.3 Whr Li-Po battery, the product is expected to give 10 hours backup, on the other hand the Galaxy Tab 2 which is powered by a 4,000 mAh Li-ion battery gives 20 hours talk time with 800 hours standby.

The products of Samsung and Apple are aimed only considering the upper market segment which includes professionals and business persons. The iPad Mini which already had opened pre orders will hit the international market at a whooping price of $329, $429 and $529 for its Wi-Fi models while the Wi-Fi + Cellular models comes at $459, $559 and $659. But while the product reaches India the price would be approximately estimated to be 31,874 and Rs 38,819 for 16GB, 32GB Wi-Fi models. For the 64GB Wi-Fi + Cellular versions the customer has to pay Rs 45,763.

Now it is to know whether the iPad Mini can bring down the fair going business of Samsung Galaxy Tab 2 P3100 which is being sold at less than Rs. 20,000. In the Indian context, price is an important factor which determines the sales of products. Considering all facts now it's time to compare the specs and features of both tablets which are pitted each other for a fierce battle.

Apple has his unique customer's and sure they will buy Apple iPad Mini at any cost. Where the Samsung Galaxy Tab 2 P3100 has great opportunity to attract newer customers with attractive prizes and features. Recently Apple won a case against Samsung and this may help indirectly to Apple to gain faith from cream customer. Also Apple may had plan to launch their product to gain maximum sale as compare to competitor. Lets see whats come out after the availability of products in market.

The author (biju cherian) is a die-hard fan of apple. With 3G default feature you can browse anywhere anytime. Remember these gadgets are no good without data connection. Thats why you are forced to take data plan with iphone in US. I would recommend all to go with Samsung for a tablet as this offers more feature & flexibility with low cost.