Nokia is presently facing a very tough competition from Android and iOS in the tech markets. However, with its collaboration with Microsoft, its market shares have improved a lot. Nokia has gained much popularity since it started manufacturing Microsoft Windows phones earlier this year.

The most talked about Nokia phones are the Lumia series, which utilize the latest Windows Phone Operating System, combines with zappy hardware and other cool features. Here we will be talking about the latest Lumia series phone from Nokia that is Nokia Lumia 510, which seems to be a blend of the Nokia Asha and the Nokia Lumia series. So here we go: 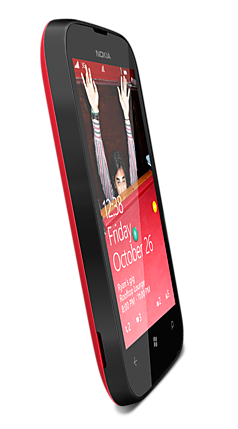 Thought the screen is a huge finger print magnet but the rear matte finish makes up for it. The device is available in vivid colors including black, white, red, yellow and cyan, which is really an attractive trait of the phone.

The front bottom is decorated with three capacitive backlit keys for general purposes. The USB port is housed by the bottom edge, the headphone socket is placed at the top edge and, the lock and volume rocker is on the right side of the device. 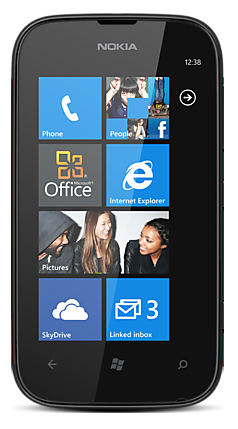 The phone is fitted with a 4 inches VGA TFT screen, which supports a pixel resolution of 480 X 800 pixels that will not amaze people but is still doable and can said to be better than the 3.7 inches screen in Lumia 610. The pixel density is fair at 223 ppi. The screen is obviously a capacitive touch screen that supports multi touch as well.

The Nokia Lumia 510 will be powered by a Qualcomm Snapdragon S1 processor which is rumored to be clocked at 800 MHz which could have been speeded up to 1 GHZ but is still negotiable. It also has a separate graphics processor as well, specifications of which were not yet been made public. As far as the RAM is considered, the device only has a RAM of 256 MB, which is inadequate.However, the processor is not very zappy but there were no considerable lags while the device was been operated. If some slowdowns are ignored, the menu transitions, app launches and navigation was quite smooth.
As already mentioned, the device is equipped with a very less 256 MB RAM. The internal storage also has a catch. It has a 4 GB internal storage space, which is not at all expandable, as the device has no external SD card slot. This may become one of the major downsides of the device. Though the Windows devices come with a 7 GB of cloud storage in case your physical memory fills up but still a 4 GB non-expandable memory is not desirable at all. Nokia seriously need to work on that in order to make this device a complete hit.

The camera can shoot videos at 640 X 480 pixels, which is very disappointing. A 5 MP camera is fine but Nokia could have provided at lease a HD 720p video recording option. However, it has digital stabilization and continuous video auto focus options.The device disappointingly has no front facing camera to help with video calls, which was again not expected by the consumers. 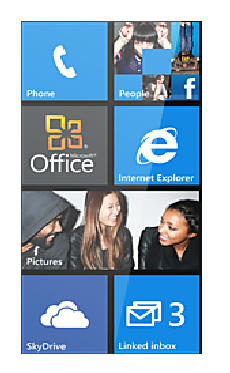 The phone had Bluetooth 2.1 with EDR that could have been the more popular Bluetooth 3.0 that is expected in all the phones today. In addition, the device has not support for NFC, which is also one of the downsides, but it is rumored that at the time of actual launch, NFC will be equipped in the phone. It support USB 2.0 and has a micro USB port for debugging and charging. The phone supports Wi-Fi 802.11 b/ g/ n.

It has an accelerometer, proximity sensor and a light sensor. It also supports voice dialing, voice commands and voice recording.
It supports both 2G and 3G networks and has full HSDPA, UMTS, EDGE and GPRS support.

The phone also has Nokia proprietary Nokia Maps, Nokia GPS navigation and Nokia Drive. The best thing is that the maps and navigation are available to you offline which is not the case in any other OS and is one of the USPs of the device.

The phone was announced on October 23 2012 and is supposed to be available by November this year in India, China and nearby countries at least. The phone is supposed to reach Asia Pacific and South American countries eventually.

However, there has been no official comment on the price of the phone but it is supposed to be priced around $ 199.

Nokia Lumia 510 with fully loaded features and a good operating system is not at all a bad deal at $ 199 for sure. Plus you will be getting the option of offline voice navigation which alone compensates for the price.

The phone will sure be a huge success in the market due to its productivity and budget friendly pricing as far as the Indian scenario is considered. People did need an actual budget friendly and Nokia just gave them one with all the required features plus Nokia Maps and voice navigation, which is free and available offline. The people are surely going to love this phone once it hits the Indian and other Asian markets.Let us hope that this phone also gains as much limelight as the other Nokia Lumia series phone such as Lumia 610 and 710 had got earlier.

Read the review of Nokia Lumia 510 along with price information and feature listing.

Read about Nokia Lumia 510 Smartphone in this review and also about features and specifications of this smartphone.