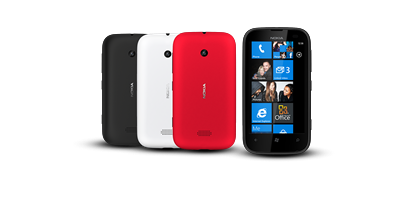 After a long wait, the most affordable Windows Phone from Nokia has finally gone official. It would be India, the first market for the cheapest Lumia device in the world overtaking its predecessor Lumia 610. The smartphone which was unveiled on 23rd September 2012 reached the shores of India it got unwrapped on 23rd October. The smartphone will reach the hands of the customers in a coupe week time, possibly in the first week of November. It is expected that the young device which comes under a price tag of Rs 11,000 will give a relief for the tech firm already struggling in the international market to keep this name.

Being a Windows smartphone with a very comfortable price, it's much sure that the Lumia 510 will clinch hearts with its overall performance. As Indian customers are really concerned about the price tag of electronic devices, the Lumia 510 will mark a stepping stone for the manufacturer to create a space for them in the Indian market. With the introduction of Lumia 510, the Finnish company aims to bring more people to experience the excitement over Windows Phone.

The all new Nokia Lumia 510 which carries a dimension of 120.7 x 64.9 x 11.5mm weighs just 129 gms. Featuring a 4-inch WVGA capacitive touchscreen display with a resolution of 800 x 480 pixels, the Lumia 510 is powered by an 800MHz single core Snapdragon S1 processor with 256MB of RAM. The phone also features 4GB of internal storage in which 2.88GB is available for the user. The Lumia 510 will run of Windows Phone Mango and is possible to get updated to Windows Phone 7.8 but not to Windows 8. As the phone runs Windows Phone 7.5, it will not have support for MicroSD cards or other external storage devices. But thanks to the 7GB SkyDrive cloud storage which will be available free.

A 5-megapixel rear camera capable of taking photos and recording videos is embedded with Lumia 510. But for disappointment the smartphone lacks a front facing VGA camera which could have equipped for video calling. On the connectivity front, Lumia 510 is packed with thrilling features which include Bluetooth 2.1 + EDR, Wi-Fi 802.11 b/g/n, 3G and micro USB 2.0 port. Loaded with a 1,300 mAh BP-3L battery, it boosts of providing 8.4 hours of talktime with 738 hours standby.

The Nokia Lumia 510 would be clearly a budget phone with affordable price and plenty of features on board. Preloaded with collections of apps including Nokia Maps, Nokia Drive navigations apps and Nokia Transport, the company offers three months of unlimited Nokia Music and Nokia MixRadio subscription. So the Lumia 510 would be ideal for those who wish to learn the basic of Windows Phone OS before moving to its upgraded version, Windows 8.

Here is the official video of Nokia Lumia 510 which gives an intact knowledge about the phone. So watch the video and make your choice.

Read the review of Nokia Lumia 510 along with price information and feature listing.

Nokia has just introduced their most affordable Lumia smartphone, which is Nokia Lumia 510. Read on this article to know the complete review and specifications of the latest device from Nokia and also find the pros and cons of the device. Also see the price and release date of the Nokia Lumia 510, which runs on Windows Mobile OS.