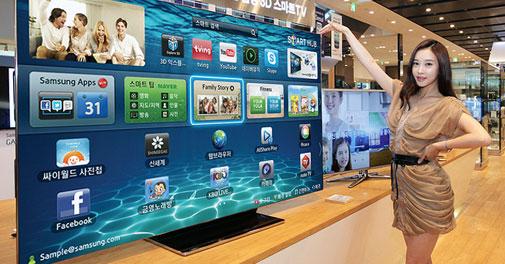 How do you feel enjoying movies at HD quality on a 75 inch TV? It would be quite interesting, right. After making a tour round in Korea and Europe, the 75-inch LED Smart TV from Samsung has reached to enthrall the Indian customers. This luxury smart TV which is being presented during this festive season will bring more colours to your home. The TV which comes along with a rose-gold-coloured finish has a slim 7.9mm curved bezel which features a built in camera.

This 75 inch HD TV is capable of providing 2D and 3D content. The Smart Hub which is known as the central brain of the device feature allows users to store information about on web browsing and also stores your downloads. This can be used to browse various websites and get updated with sports scores or latest news or you can download games and other web applications directly.

Multitasking is possible in this TV which is powered by powered by a dual-core processor. The Smart Content which is embedded in the TV allows users to experience with up gradation of softwares. The Samsung ES9000 75-inch LED Smart TV boosts of having a unique features including smart interaction which allows users to control the television using gestures. The camera which is being enabled above the TV will capture your motion and gestures and stores in its registry.

Just by moving your hand and with other smart gestures, you can change the channel, raise and lower the volume and even move the cursor around the screen to open apps and play games. Through the built-in microphone, users can give commands. Walking through the gesture control feature, users can experiment the Angry Bird game which can be played just by waving hands to chuck the birds and endow them with special powers. Meanwhile for connectivity, 3 HDMI slots and an USB is included. The app which is available free at Samsung app store can also be used with ES7500, ES9000, ES8000 LED, and E8000 Plasma TV.

A new feature called Sound Share is included in the Smart TV which facilitates users to connect to the TV audio to Series 6 and Series 7 wireless dock system. The Samsung ES 9000 which comes with superior quality and elegant design would provide consumers a new viewing experience. Another feature of ES9000 is the complete utilization of Samsung's Micro Dimming Ultimate and Precision Black technology. Through this technology Brightness, black levels and contrast ratios have been improved delivering superior picture quality.

During this festive season, Samsung has officially unveiled special Diwali offers exclusively for the Indian customers. For each purchase of a Samsung Smart LED or Plasma TV models of 46-inches and above, consumers will avail a Galaxy Tab 310 or 11 by 1 finance scheme. For the purchase of a Samsung Plasma 3D TV a 3D BD Player along with 3D Movie titles worth Rs 10,990 will be granted free.

Samsung Electronics aims to make a hold in the television market by selling 5.2 million units in 2013. The company wants to boost their market share from 30% to 35% in the flat panel segment while hoping to gain 60% market share exclusively in the smart TV segment.

Read our experience with the 84-inch Ultra High Defition 3D TV from LG Electronics, the world leader in consumer electronics.

This article gives a detailed look at the Samsung 75" ES9000 3D HD Smart TV. Here you can find the price, specifications and features of this high end smart LED television.

LG launches 84 inch Ultra High Definition 3D TV. There are many new features in this Smart TV that can be read in this page.

If you will check the rating's for the new Samsung window, no doubt it is top rated. People like this Smart window due to its ultimate features, like it has stylish body, it is touch screen and transparent etc . If you want to buy it online then you can buy it from TapTL.