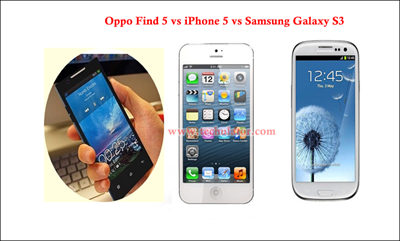 Started a few years ago, the tech world had been seeing a tough of war between Apple and Samsung unveiling their mighty series of products back to back. The latest to add fire would be Apple's iPhone 5 pitted against Samsung Galaxy S3. Both tech giants had been putting a tough race each other to climb up the ladder to capture the supremacy of the market. While both the devices are sold in open market like hotcakes, a new smartphone Oppo Find 5 is roaring up to challenge the duo. The specifications and features of Oppo Find 5 are quite impressive which would bring a lot of queries in the days to come. So now it's time to check how the new born baby Oppo Find 5 is going to challenge Apple iPhone 5 and Samsung Galaxy S3.


While considering the design, the iPhone 5 and the Galaxy S3 are thin measuring 7.6mm and 8.6mm thickness respectively but fail to Oppo Find 5 which measure just 6.9mm. The Oppo Find 5 will weigh 149 g, which is little bit more than its arch rival's iPhone 5 and the Galaxy S3 which weighs 112g and 133g respectively. So here Apple iPhone 5 would be the lightest among the three which is under our point of discussion. Samsung which is known for its perfection in design will be safe in the palm which gives more comfortable to the users.

The Samsung S3 boosts of having an amazing display screen of 4.8 inch HD as super AMOLED display while the Apple iPhone 5 goes behind with its 4 inch display with a screen resolution of 1136x640 pixels. On the other hand Oppo Find 5 which comes in bigger size with 5 inch giant sharp screen 441ppi display of 1920x1080 pixel resolutions. So much words to say, Oppo Find 5 emerges as a clear winner striking down iPhone 5 and Galaxy S3.

If the Apple iPhone 5 is embedded with a A5 processor, the Galaxy S3 will come along equipped with a quad-core 1.4GHz Exynos processor. Competing with both the Oppo Find 5 will have a 1.5GHz quad core Snapdragon S4 processor which would give faster results and better graphics. Both iPhone 5 and Galaxy S3 will have 1GB RAM while the Oppo Find 5 would boost of having 2GB of DDR3 RAM.

On the camera front, Apple iPhone 5 and Samsung Galaxy S3 will have a rear camera with 8 Mega Pixel which is ideal for low light mode and night time snapping. Both smart phones do enthrall the customers with their unique camera features and best pictures. Meanwhile the Oppo Find 5 will add more colours with its monstrous camera which boosts of having 12 Mega Pixel. As more details about the camera will be out in the coming days, we could give more genuine news later.

The iPhone 5 will powered by the OS 6, the latest mobile operating system developed by Apple Inc. On the other hand Samsung Galaxy S3 will have Android 4.0 Ice Cream Sandwich OS. But the Oppo Find 5 will get the flavour of latest Android 4.1 version, Jelly Bean. The Apple iPhone 5 which comes with a comfortable battery power of 1700mAh will feature less capacity compared to the 2000mAh set in Samsung Galaxy S3. Meanwhile the Oppo Find 5 boosts of having a majestic battery power of 2500mAh.

The Apple iPhone 5 will be available around the globe at a cool price. It would cost $1000+ and will be charged Rs 55,000 while reaching India. On the other side the Samsung Galaxy S3 costs around $660 in USA and in India it would be 35,000. Both phones are now being made available in more countries. The Oppo Find 5 will debut in China priced at 3000 Chinese yuan (about US$475) and 3300 Chinese yuan (about US$520) respectively for its 16GB and 32GB versions.